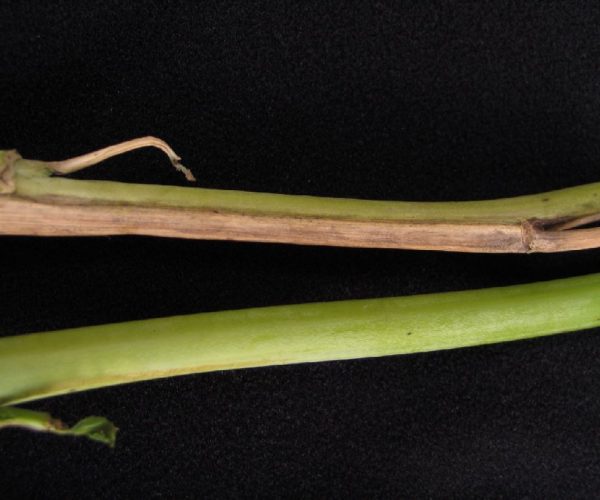 Fusarium wilt is a fungal disease caused by the pathogenA disease-causing organism (such as a fungus or bacteria). More Fusarium oxysporum that can affect canola. It is not very common due the successful introduction of a resistant gene in the early 2000s.

Conditions which stress the plant, such as limited if moisture, increases the risk of infection. It can cause yellowing, wilting and dark discolouration of the vascular tissue, often occurring only on one side of the stem or on the branches. It can also cause an orange or pink discolouration at the base of the stem and premature death in severely-infected plants.

Fusarium wilt, a fungal disease of canola, is caused by the pathogenA disease-causing organism (such as a fungus or bacteria). More Fusarium oxysporum f. sp. conglutinans.

Fusarium oxysporum usually winters as soil-borne chlamydospores (thick-walled resting spores) in the soil or on infected crop residues. Two other spore types, macro- and microconidia, are also formed. Spores germinate and penetrate roots directly or through cracks formed by emerging lateral roots. The expanding myceliumMicroscopic fungal filaments More then infects the vascular tissue, which becomes discoloured and blocked. The fungus produces microspores that move up the stem. The blockage of the xylem prevents water movement up the stem, resulting in wilting of the plant. Spores are also formed on aerial plant parts, which fall to the ground and re-infest the soil. Occasionally, seed is infected via the vascular tissue, but usually the seed aborts before this can occur. Fusarium oxysporum is very long-lived in the soil with spores remaining over 10 years. The pathogenA disease-causing organism (such as a fungus or bacteria). More moves through the soil by wind or water movement, or on equipment.

Any conditions which stress the plant increase the risk of infection. Fusarium wilt is affected by environmental conditions, primarily soil temperature and moisture. Warm temperatures above 16°C encourage disease development 1. Dry soils are favourable for disease development. Factors that contribute to a reduced rate of root growth increase the plant’s susceptibility to fusarium wilt 2. Early planting in cool, moist soil favors the disease.

Fusarium wilt of canola was first seen in the Peace River region of Alberta in 1999, the first report in North America 3. A widespread fusarium wilt epidemic occurred in 2002. Severely affected crops were found in an area ranging from central Alberta to northeastern Manitoba. Of 52 Brassica napusAlso referred to as Argentine canola, it is the species of canola currently commonly grown in Canada. More fields surveyed in central Alberta during late August, 22 fields showed some level of fusarium wilt. One hundred randomly selected plants were surveyed per field. An average of 17 per cent of plants in these 22 fields was affected. Fusarium wilt incidence in these affected fields ranged from trace to 52% 4

If conditions are moisture limiting, symptoms will be more noticeable and easier to detect. Scout for these symptoms:

• Yellowing, wilting, and dark-brown or black discoloration of the vascular tissue, often occurring only on one side of the stem or on the branches known as unilateral streaking. Some plants may have an orange pink discolouration at the base of the stem. Plants with minor infection may also ripen prematurely and tend to shatter.

• Premature death in severely infected plants. Stems and branches turn brown, but plants remain upright with roots intact. No visible lesions are visible on stems or roots. Plants are often stunted and have small pods with no seeds.

Fusarium wilt is not as common as other canola diseases. All Canadian spring canola cultivars should be resistant to fusarium wilt with the introduction of a resistant gene in the early 2000s. A major dominant gene is involved in the control of fusarium wilt resistance in Brassica napusAlso referred to as Argentine canola, it is the species of canola currently commonly grown in Canada. More 5. There are no known varieties with intermediate resistance, therefore intermediate symptoms are caused by environmental or inoculum factors.

Other management practices include:

The genus Fusarium is very diverse containing many pathogenic species that can cause plant diseases such as wilts and root rots 7. The fungus occurs globally with F. oxysporum being one of the most variable species within the genus 8.

In a 2014 study, the predominant Fusarium sp. isolated from the sampled canola fields was F. acuminatum 9. These results suggest that fusarium seedling blight and root rot may now be more important diseases of canola in Alberta than fusarium wilt, which could reflect the widespread cropping of canola cultivars with effective resistance against the latter.