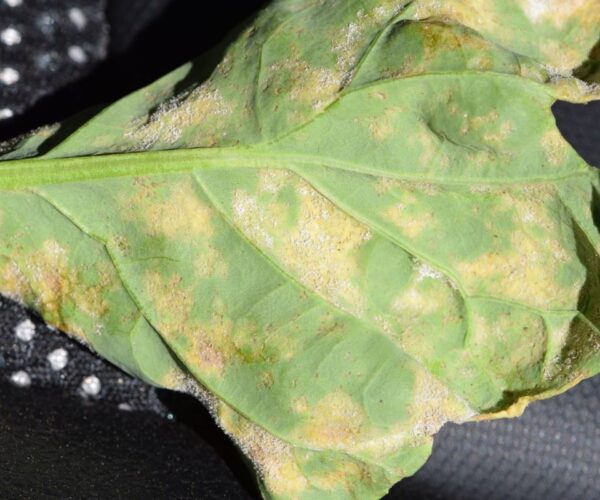 Downy mildew is a plant disease caused by the pathogen Hyaloperonospora brassicae. Downy mildew is currently a minor disease that is not of economic concern for canola grown in Canada, as it has no known significant effects on seed yield and quality. Leaf lesions on the top surface of the leaf and mealy white conidiophores on the underside of the leaves can be used to identify downy mildew whenever scouting canola fields between seedling to podding stage, especially after high relative humidity and/or prolonged high moisture periods.1,2,3

Downy mildew disease symptoms can appear as early as the seedling stage or as late as the podding stage. Environmental factors, such high relative humidity and/or prolonged high moisture periods, can make the disease more likely to appear.

Symptoms of downy mildew disease in canola appear primarily on leaves and inflorescences (buds and flowers) and can become more evident as infected tissues age. Typical leaf lesions appear as discolored spots, sometimes chlorotic and/or necroticA symptom of plant cell or plant tissue death. More, on the top surface of the leaf. The underside of the leaves will commonly have characteristic mealy white conidiophores present in the lesions. Plants infected at the cotyledon stage may die if cotyledon infection progresses into the hypocotyl. Canola pods can be infected late in the season developing lesions as well.1,2,3

When scouting for disease in canola crops, downy mildew symptoms can usually be differentiated from other diseases:

There are currently no fungicides registered for control of downy mildew in canola 4. Using a crop rotation with non-cruciferous crops, ensuring control alternate hosts such volunteer canola, stinkweed and wild mustard is recommended for general canola disease management.

Resistance in B. napusAlso referred to as Argentine canola, it is the species of canola currently commonly grown in Canada. More, B rapa, and B. junceaAlso referred to as brown mustard, it is a minor crop (from the Cruciferae or Brassicaceae plant family, commonly known as the mustard family) grown in Canada. More to downy mildew disease has been reported in the scientific literature, but cultivarA cultivar is a variant in a species developed through the intervention of humans (despite the term 'variety' often being incorrectly used to describe this). A cultivar can be open-pollinated type, hybrid, synthetic, composite, etc. More resistance in Canada is not tested or reported publicly. Currently downy mildew is not a disease of economic concern for canola grown in Canada, and has no significant effects on seed yield and quality.1,2,3,5

Canola Watch quiz
If you have trouble with the embedded quiz on your device, click here. Create your free online surveys with SurveyMonkey , the world’s leading questionnaire tool. Answer: Blackleg is on…
Powdery mildew
Powdery mildew in canola is caused by the fungus Erysiphe cruciferarum. It causes powdery, white fungal growth on canola leaves, stem and pods and is best noticed at swathing timing,…
White leaf spot and grey stem
White leaf spot and grey stem are both canola diseases caused by the fungus Mycosphaerella capsellae (anamorph Pseudocercosporella capsellae). White leaf spot and grey stem are widespread throughout the canola growing…
White rust (staghead)
White rust is a canola disease caused by the pathogen Albugo candida that affects mainly Brassica rapa and B. juncea cultivars. B. napus cultivars are resistant. This disease was a…