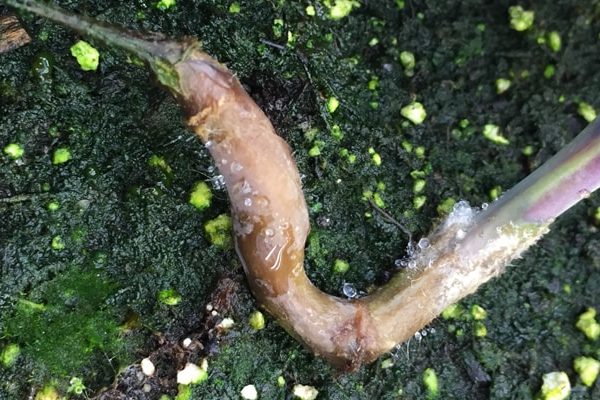 The root rot complex is mainly caused by three types of soil-borne pathogens which affect the roots of adult plants. The disease symptoms are potentially serious, and the incidence, as well as intensity, is increasing throughout the Prairies. An understanding of the disease cycles, prevention strategies, ability to identify symptoms and manage them will improve the potential for successful canola crop.

The pathogens causing these symptoms are potentially serious, and the incidence, as well as intensity, is increasing throughout the prairies. Brown girdling root rot is the most serious root rot disease and is believed to be caused primarily by the fungus Rhizoctonia solani, with secondary infections by Fusarium spp. In most of Western Canada, these diseases manifests primarily at the seedling stage, while in the Peace River region both seedling loss and the much more serious BGRR occur 1.

Brown girdling root rot affects all cultivars, although B. napusAlso referred to as Argentine canola, it is the species of canola currently commonly grown in Canada. More (Argentine) cultivars are more resistant. Losses are highest when wet soil conditions occur at early flowering, followed by dry weather later in the season. Infection levels may reach 80 to 100 per cent in some fields, with losses approaching 50 per cent. In the 2010 disease survey BGRR was found in 20 per cent of canola crops in Alberta with a mean incidence of three per cent 2. Rhizoctonia solani exists as several strains with anastomosis group AG2-1 commonly identified in the Peace River region and the less virulentA form which causes infection (and can result in a disease) More AG4 in other regions. The other diseases in this complex, foot rot and root rot, can be caused by any of these pathogenA disease-causing organism (such as a fungus or bacteria). More and often are less common and less severe as BGRR.

The brown girdling root rot (BGRR) pathogens are soil-borne. Light brown lesions with irregular margins first appear at or after the onset of flowering, usually 7.5 centimetres (three inches) or more below the soil surface on the taproot or main lateral roots. Later lesions may appear anywhere on the taproot. As the lesions develop they expand, grow together, become sunken and eventually girdle the taproot, causing poor pod development, shriveled seeds and uneven maturity. The sunken lesions become dark brown. Roots below the girdling location rot off. The lesion continues to develop upwards, sometimes to the soil surface but never moves into the stem. Root tissues above the infected part become swollen.

In moist conditions, the whole taproot may be destroyed up to the soil surface. Girdled plants may survive and even set some seed if they are not uprooted or blown over by wind.

In dry soil, a sound taproot stub remains. The above ground parts of the plant remain turgid as long as there is any root connection with moist soil. Taproot stubs that retain a few roots are sometimes capable of regenerating main laterals as well as fibrous roots. Plants with girdled taproots wilt, dry up and shrivel, even though soil moisture may be adequate for plants with normal root systems.

Yield losses will depend on the amount of root system lost by girdling. If only root stubs are present or brown lesions girdle the taproots, the disease will result in considerable yield loss. If brown spots are present, but do not girdle the root, actual disease losses may be minimal. Losses are a result of increased pod sterility, loss of seed weight, and seed shriveling and plant death from desiccation or wind toppling. Girdled plants that survive ripen prematurely and tend to be pulled out of the ground rather than cut during swathing, increasing shatter losses.

Disease development appears to be favoured by fine-textured heavy clay soils with high levels of copper (four to 20 parts per million). The Beaverlodge, Alberta AAFCAgriculture and Agri-Food Canada is a department of the Government of Canada. More Research Centre found that disease severity was similar for all tillage systems 3. Brown girdling root rot can be more severe in canola crops that are grown after canola (in a rotation), clover or fescue than in canola crops that follow summerfallow. For reasons not clear, decomposing fescue sod is conducive to the development of this disease. It is unpredictable because it can also be severe where canola has never been grown previously, and even on freshly broken land that has never been cropped. Several cruciferousPlants belonging to the family Brassicaceae or (previously referred to as) Cruciferae. More weeds, including stinkweed, shepherd’s purse and ball mustard, also suffer from root rot.

A 2000 study conducted at the AAFCAgriculture and Agri-Food Canada is a department of the Government of Canada. More Research Centre in Beaverlodge, Alberta showed that average seed yield was not reduced on plant roots with non-girdling lesions and superficial non-sinking girdling lesions, but was reduced by 17 per cent on plant roots with girdling and sinking lesions, and by 65 per cent on plants with decayed taproots. Over two years, yield losses in growers’ fields ranged from one to five per cent 4.

In the growing season, brown, hard, clearly defined lesions occur near the stem bases of canola plants. The lesions may be black-bordered, and during periods of humid weather, pink spore masses may develop on diseased root tissues. Discolouration of the upper part of the taproot above the lateral roots may occur. In severe cases, the stem is girdled, killing the plant. Yield loss may occur when the stem is one-half girdled. Yield losses are light when lesions occur late in the season. Affected plants may ripen prematurely as scattered plants or in patches in the field. Where foot rot develops late in the season, the earlier maturing B. rapaAlso referred to as Polish canola, it is the less commonly grown species of canola currently grown in Canada. More cultivars may escape infection or lesions may not have time to develop to the point that yield is seriously reduced.

The root rot pathogens are soil-borne. Losses are highest when wet soil conditions occur at early flowering, followed by dry weather later in the season. The root rot complex disease causes brown lesions on the main taproot near the time of flowering.

There are several species of Pythium that infect canola roots, but the most prevalent appears to be P. ultimum. Pythium species are generalist pathogens infecting many species of plants (therefore while a diverse rotation can be beneficial, it won’t eliminate this soil-borne disease). They are also saprophytes, or decomposing organisms, although they are not as aggressive as other saprophytic microbes.

The Fusarium genus has many species which are fungal plant pathogens and there is a range of variability between species and within a species. F. avenaceum, F. oxysporum, and F. culmorum have been found to cause root rots in canola 5, although other species may also be involved. While many species favour warmer temperatures and moist soils, there is variability between the environmental factors that favour one species over another in infecting plants. Therefore under almost any type of environmental condition some Fusarium species will be able to cause infection. The severity of the disease may be greater in wet or dry years when crops are already vulnerable.

Fusarium species overwinter as thick-walled chlamydiospores. These spores germinate in the spring into myceliumMicroscopic fungal filaments More, which seek out developing canola roots to infect. When Fusarium myceliumMicroscopic fungal filaments More come into contact with root tissue, the fungus produces an infection cushion that allows the pathogenA disease-causing organism (such as a fungus or bacteria). More to invade the root tissues. Depending on the species involved, this fungus then grows intracellularly, infecting a range of tissues (and producing symptoms), with some invading vascular tissue growing up into the base of the stem producing foot rot symptoms. Some Fusarium species are more aggressive than others. Although many Fusarium species produce airborne spores (conidiaSingle-cell spores or fungal propagules (such as those Verticillium species form). More and ascosporesMicroscopic asexual spores that typcially become airborne. More) these do not play a role in canola diseases since stem tissue is not susceptible to Fusarium infection. As plants mature, myceliumMicroscopic fungal filaments More differentiates asexually into chlamysiospores to survive the winter months.

Rhizoctonia solani is a fungal pathogenA disease-causing organism (such as a fungus or bacteria). More that infects many species of plants and lives as a successful saprophyte (decomposing organism). This pathogenA disease-causing organism (such as a fungus or bacteria). More causes one of the more familiar of the canola seedling disease symptoms, the collapsed and brown root tissue called wirestem. The Canadian Prairies has two common groups of this species. One group, which pathologists call AG2-1, favours cold to cool conditions, while the other group, AG4, favours cool to warm conditions. AG2-1 appears to be more successful at infecting over a wider range of temperatures than AG4) 6">https://doi.org/10.1016/0261-2194(92)90072-D)). AG2-1 is more of a crucifer specialist and is the more common group in the Peace region. It can be active at soil temperatures as low as two degrees Celsius, and it tends to be more severe when soils are moist and warmer than two degrees Celsius. Like root diseases in general, damage tends to be worse in heavy soils and compacted soils.

See this Canola Watch article for a good analogy of the three different families of seedling disease complex.

When scouting for the cause of poor emergence, check for the following symptoms of seed decay, stem rots and root rots that are all part of the seedling disease complex.

Symptoms specific to each seedling root rot should also be considered.

Early symptoms consist of light-brown lesions on the taproot or main lateral roots well below the soil line. These enlarge and coalesce, become sunken and girdle the taproot. Only a short taproot stub may be left. Plants ripen prematurely in the field, often before any seed has been set. Girdled plants are subject to death from desiccation or uprooting by wind. Other symptoms include:

To correctly identify this disease, look for hard brown lesions at the stem base and salmon-coloured spore masses may be present in lesion. Losses tend to be minor as lesions develop late in season. Early lesions can cause premature ripening and reduced yields

The symptoms are variable in colour and shape but can be grouped into four general types:

Root rot symptoms occur sporadically throughout canola growing areas. Brown girdling root rot is an extremely widespread in the Peace River region of Alberta and British Columbia, but occurs only occasionally in the northern parkland zone. It tends to be a more serious problem in B. rapaAlso referred to as Polish canola, it is the less commonly grown species of canola currently grown in Canada. More cultivars as they have greater susceptibility. In the Peace River region, BGRR causes greater yield losses than all other diseases.

Brown girdling root rot is rarely seen outside of the Peace region, so tests will need to be done to confirm.

Risk of root diseases can increase with increasing canola cropping intensity. Consider including field peas in the rotation (to improve the nitrogen level) along with other pulse or cereal crops to reduce disease severity.

B. rapaAlso referred to as Polish canola, it is the less commonly grown species of canola currently grown in Canada. More (Polish) cultivars are generally more susceptible to BGRR. Use B. napusAlso referred to as Argentine canola, it is the species of canola currently commonly grown in Canada. More (Argentine) cultivars in suitable climatic regions, as they are only moderately susceptible, but under the right conditions BGRR can still be a problem.