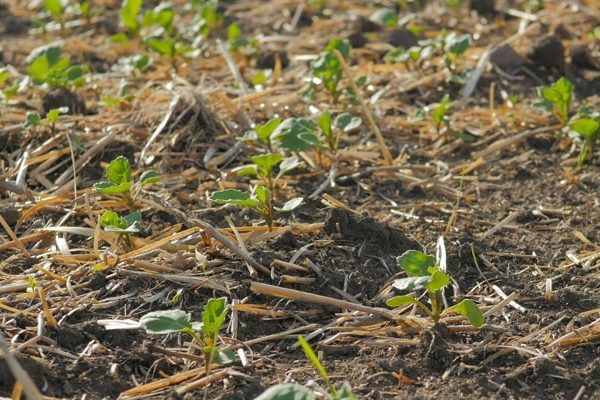 A favourable seedbed is important for good stand establishment, especially since canola seeds are relatively small compared to other commodities, and canola emergence rates remain a major challenge.

For optimal canola seedbeds, it is important to note:

Residue management starts with the combine, may include harrowing or tillage, and ends with seeding equipment.

The combine must be able to spread residue the full width of cut for the swather or straight cut header, creating a relatively even matt over the whole soil surface. Most new combines are equipped with good straw choppers and chaff spreaders or are easily adapted with after-market units, but these must be maintained in good condition to break up straw and chaff and distribute it properly. If distribution behind the combine is not adequate, tillage or harrowing may be able to fix the problem — at risk of losing some snow catching stubble and at greater cost of fuel, labour and machinery. With residue spread evenly, the seeding equipment still has to allow crop residue to pass through without bunching, and the opener must prevent chaff residue from falling into the seed furrow and causing poor seed cover and poor furrow closing.

The most common locations for plugging in the seeder are:

The critical dimension may vary with the amount of crop residue on the surface, the moisture content of the residue or even the air humidity. Damp straw plugs the seeder quite easily. Fluffy straw plugs more easily than straw lying on the soil surface. Dry straw on a warm, breezy day will pass through a seeder while damp straw may not. Changing speed and direction of travel may help a seeder to clear crop residue.

The straw handling performance of many seeders may be improved by modifying the location where plugging most often occurs. The space between the opener and “plug point” may need to be increased, sometimes greatly, to prevent plugging. Four-rank cultivator units on air drills will plug less than three-rank units.

Residue managers are spike wheels attached to the front side of each drill opener shank. The spike wheels clear away residue or hold residue in place temporarily, leaving a narrow strip of bare soil for the opener. The Farm Stewardship Centre (formerly the AgTech Centre) in Lethbridge investigated the effectiveness of residue managers in 2007 and found that some were able to facilitate seeding without plugging, although differences in crop emergence and final yield turned out to be infrequent 1.

Research from the Peace River region found that a narrow strip of bare soil over the seedbed could help canola overcome most of the cold temperature and excessive moisture disadvantage of direct seedingA seeding method where the crop is sown into the field without any previous spring tillage operations. More in unfavourable situations. The research in silt loam and sandy loam soils in 1992 and 1993 compared canola and barley production in no-tillage (NT), modified no-tillage where surface residue was pushed aside from a 7.5 centimetre zone above the planting rows (MNT) and conventional tillage (CT). Seed zone temperatures were higher in MNT and CT than in NT. The MNT was more beneficial for crop establishment during prolonged dry periods than CT, and for emergence and growth compared with NT under extremely wet soil conditions 2, 3, 4.

Agriculture and Agri-Food CanadaAgriculture and Agri-Food Canada is a department of the Government of Canada. More research in Swift Current, Saskatchewan, a semi-arid part of the Canadian Prairie, assessed the effect of stubble management on the microclimate, water use and seed yield of canola. Tall (30 cm), short (15 cm) and cultivated stubble treatments were deployed in fall and in spring. Tall stubble increased seed yield of canola by about 24% and water use efficiency (WUE) by about 19% compared with stubble cultivated in the fall. In fields that overwintered as tall stubble and then were cultivated or trimmed in the spring, tall stubble increased canola yield by about 16% and WUE by about 11% compared with cultivated stubble. The differences in wind velocity, soil temperature and solar radiation reaching the soil surface indicated significant modification of the microclimate by tall compared with cultivated stubble 5.

A subsequent AAFCAgriculture and Agri-Food Canada is a department of the Government of Canada. More study found that crop yield and the overall average water use efficiency increased linearly as stubble height increased to 45 cm 6.

Soil must be repacked around and above the seed to prolong seed contact with moist soil. Packing reduces moisture loss from the seedbed by creating a denser soil layer at the surface with fewer large air spaces.

A fine balance often exists between packing enough to reduce moisture loss and packing too much, which in some soils may promote crusting that hinders seedling emergence. Adequate packing is achieved when all the soil lumps are crushed both around and above the seed.

In general, canola needs minimal packing for optimum crop establishment. Some packing will improve stand establishment under dry conditions, but over-packing can promote crusting, especially in high clay and other crust-prone soils, and reduce crop emergence in wet soil conditions 7.

Yield response to any type of packing pressure is limited, likely because canola can branch out and compensate for poor stand establishment. However, lighter soils more prone to moisture loss and less prone to over-packing and may benefit from heavier packing pressure 7.

Most ground openers require a packer to close and pack the soil in the furrow to create a good seedbed. The packer’s shape and width must conform to the furrow and the location of the seed underneath. A direct, minimum disturbance seeder requires an on-row packer. A wide sweep opener that cuts the full width of the seedbed requires a harrow, rod-weeder, packer or a combination of several systems to finish the seedbed.

There does not seem to be one best opener-packer combination for canola. An Agriculture and Agri-Food CanadaAgriculture and Agri-Food Canada is a department of the Government of Canada. More and PAMI study compared various opener and packer combinations and concluded that the advantages were minor and likely of little agronomic or economic significance to most farmers 7.

What to do about crusting?
Rain after seeding can often cause top soil to crust, stopping the emergence of canola seedlings. Canola seedlings can’t penetrate the crust, and often curl back and die. No research…
Residue rescue: Survey results
High cereal yields last year mean more residue issues this spring. If the drill cannot cut through or dig under the residue to place seed into soil, then some sort…
Spread residue evenly in fields planned for canola in 2012
Good canola stand establishment, especially in direct seeding situations, starts with straw and chaff management for the previous crop. Spreading residue evenly across the field is critical. If the combine…
Residue management starts at the combine
An important factor in canola stand establishment next spring is the crop residue situation this fall. An even mat of cereal residue is preferable to clumpy distribution that can affect…