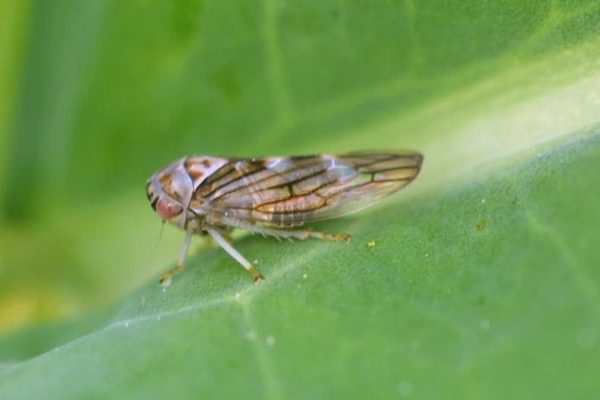 This migratory pest insect which arrives in Canada in the spring, depending on the wind trajectories, is best known for being a vector of the aster yellows phytoplasma, which infects canola plants. Scouting and correct identification of the insect and its damage are all necessary to properly assess and manage both the insect and plant disease it can cause.

Aster leafhopper adults are 3.5 to six millimetres long and light green or straw-coloured, with six distinctive dark coloured spots on their forehead. Leafhoppers are characteristically narrow and wedge-shaped and readily move or fly in warm conditions. Eggs are laid in plant tissue, with yellow, brown or greenish nymphs maturing through five stages prior to adulthood 1.

The wind-blown migratory aster leafhopper (Macrosteles quadrilineatus) is responsible for moving most of the aster yellows disease across North America. A small proportion of aster leafhoppers may hatch from eggs laid the previous season, but usually very few, if any, adults manage to overwinter in the Canadian Prairies. The development of two generations of migratory leafhoppers may be possible if adults are blown in during early spring. In addition, other leafhopper species have the potential to spread aster yellows by feeding on a range of hosts (in addition to canola), such as grass ditches or cereal crops 2,3. Early greenhouse studies indicate that leafhoppers can produce significantly more infection in wet conditions than under dry soil conditions 4.

If and when an economic thresholdAn economic threshold is the level of infestation (ex. pest insect density) at which lost yield (ex. due to feeding/insect pest damage) exceeds the cost of the chemical and its application. More is eventually developed for this pest insect, it will likely take into account factors such as soil moisture conditions, insect infection level and plant stage. It would also likely be a threshold in excess of four leafhoppers per individual canola plant (between the cotyledon to four-leaf stage).

Potential distribution of aster leafhoppers each season is estimated by models that consider wind trajectories coming up from the southern United States each spring. These models, which are produced by Agriculture and Agri-Food CanadaAgriculture and Agri-Food Canada is a department of the Government of Canada. More and Environment and Climate Change Canada scientists,provide an early-warning system for migratory insects, such as aster leafhoppers and are posted on the Prairie Pest Monitoring Network Blog. There are ‘reverse trajectories’ (tracked back in time from a specific location over a five-day period prior to their arrival date in Canada) to identify potential insect sources. There are also ‘forward trajectories’ (modelling to predict future pathway of a wind trajectory from a point in Mexico or the USA) to the investigate winds that eventually end up passing over the Prairies. These wind tracking efforts were originally used to identify potential diamondback moth inflows, but also serve to identify the potential for leafhoppers to arrive 3, such as the reverse trajectory map of the Canadian prairies that can be used as a prediction for aster leafhopper population distributions 5.

Scouting and monitoring programs for aster leafhoppers have been conducted since 2001 by Agriculture Canada scientists, with a combination of sweep net and sticky card traps. Infection or transfer of the phytoplasma from infected leafhoppers is more likely to occur when high levels of these infected insects are blown in early, prior to the four-leaf stage of canola. In 2012, the only year to date where growers would consider this disease widespread, leafhoppers arrived highly infected (9.1 per cent) in large numbers (126/20 sweeps). In comparison, other years may average less than 10 leafhoppers per 20 sweeps 4. Currently no specific control recommendations exist for this insect or the aster yellows disease which aster leafhoppers are a vector for. Ongoing research on this insect and disease may provide further insight.

Damage (due to aster yellows disease)

Characteristic symptoms of this disease are the development of bladder-like pods filled with leaf-like tissue, green pigmentation of floral parts (virescence) and green flower petals (phyllody). While symptoms may be confused with other diseases (ex. purpling or discolouration caused by heat stress or nutrient deficiency), stems of infected canola plants characteristically have little seed set. This reduced weight allows them to stand prominently above the crop canopy. Typically aster yellows disease only affects a low number of individual plants within the canola crop and has limited impact on yield as a result. However, it isn’t uncommon to find a few infected plants (at podding stage) in many fields. Aster yellows outbreak years have been documented in western Canada in 1957, 2000 (two to 15 per cent infection), 2007 (two to 25 per cent infection) and in 2012 with five to 84 per cent infection resulting in a significant yield reduction for many growers across the Prairies 1,4.

Regular field scouting, record keeping and maintaining a healthy crop (which can withstand disease pressure) are all recommended. Despite a couple insecticides being registered to control aster leafhoppers, without any confirmed economic thresholds to advise if spraying is economical or any confirmation of the ideal application timing to advise when to spray, no chemical control options are recommended at this time. However, future research results may address this.