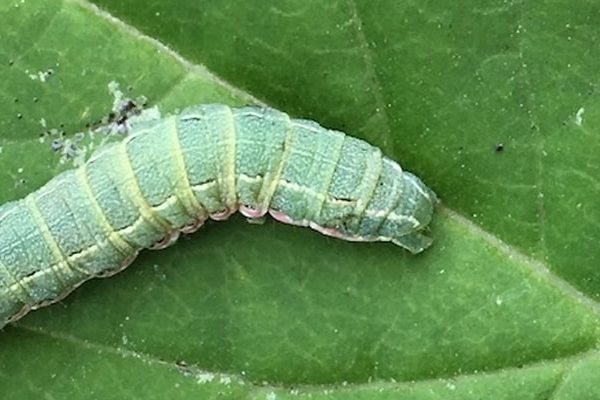 Similar to other cutworms, this insect pest only causes damage to the crop during the larval stage. As a generalist, it can feed on a varietyA variety is a variant of a species that evolved in nature without the intervention of humans, e.g. Brassica oleracea variety (in short form, var.) botrytis (cauliflower), var. capitata (cabbage), var. italica (broccoli), etc. More of crops, including canola. The adult moth feeds on nectar from flowers and can easily be confused with other cutworms and with bertha armyworms. In addition to some biological controls, there are management options for these larvae, however without an established economic thresholdAn economic threshold is the level of infestation (ex. pest insect density) at which lost yield (ex. due to feeding/insect pest damage) exceeds the cost of the chemical and its application. More, nominal bertha armyworm thresholds are the best consideration.

The clover cutworm, Discestra trifolii (Hufnagel) is an occasional insect pest of canola. It overwinters as pupae in the soil and has two generations per year. The first moth generation appears in June, the second in late July. The adult moths are uniform or mottled ash grey to pale brown.

White or pale yellow eggs are laid separately on the undersides of leaves in late spring and during the summer. The newly hatched light green caterpillars feed on the undersides of lower leaves, gradually moving up the plant as they mature, causing damage during late June through early July and again from mid- August through to September.

Clover cutworm larvae are very similar in appearance and size to bertha armyworm larvae, but fewer velvety black caterpillars are found and the majority are either green or pale brown. The most distinct difference between the two species is the wide stripe along each side of the clover cutworm is yellowish pink and yellowish orange on bertha armyworm. Mature caterpillars burrow into the topsoil to pupate. The pupa is somewhat smaller than that of bertha armyworm, and has a greenish tinge at one end. Most of the pupae formed in mid-summer emerge to produce the second flight of moths. The second-generation larvae frequently cause damage at the same time as bertha armyworm (August 10 to 30). In years when both are present, clover cutworms may be mistaken for bertha armyworm. This insect has only been an economic problem in the Peace River area of Alberta 1.

Clover cutworms feed anywhere on the canola plant and can consume the entire plant. The economic thresholdAn economic threshold is the level of infestation (ex. pest insect density) at which lost yield (ex. due to feeding/insect pest damage) exceeds the cost of the chemical and its application. More for this insect is likely similar to that for bertha armyworm. However, bertha armyworms tend to be dispersed throughout the field, while clover cutworm larvae are aggregated in clusters producing more concentrated damage. First generation clover cutworm larvae attack canola earlier than bertha armyworms. However, with light infestations, the plants will probably recover. Infestations in localized areas of northern Alberta have caused severe damage. In most years, diseases control the insect with only an occasional isolated outbreak.

Scout fields mid-June through late August. The clover cutworm is occasionally an economic problem, especially in the Peace River region.

As a climbing or above ground cutworm, foliar spray applications are successful in controlling clover cutworm infestations. Check provincial crop protection guides (from Manitoba, Saskatchewan, Alberta, etc.) for registered insecticides. Spraying for clover cutworms can put honeybees at risk when canola crops are in flower.

Insect update: The biggies plus clover cutworms and little red bugs
Diamondback moth. Trap counts are low so far but have been picking up over the past couple of weeks. This makes us think of 2017. Even with low trap counts…
Cutworms Appearing
Reports of cutworms (in populations high enough to warrant spraying or to destroy significant acreages where they were missed) have been reported in isolated fields right across western Canada. Cutworm…
More Cutworms Appearing
Reports of cutworms continued this week across western Canada. Cutworm damage often appears as bare patches showing up across the field. Plants in these areas will be wilted or dead…
Insects: Cutworms in some fields
Cutworms have been observed in some regions, including the southeast Peace region and west-central Saskatchewan stretching into Alberta. In western Saskatchewan, early observations suggest that cutworms are worse in fields…