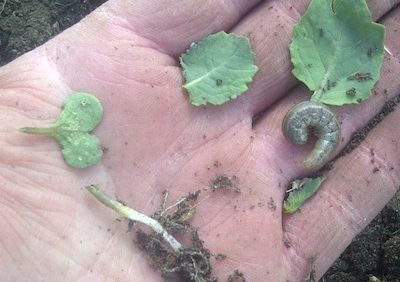 Cutworms have been observed in some regions, including the southeast Peace region and west-central Saskatchewan stretching into Alberta. In western Saskatchewan, early observations suggest that cutworms are worse in fields that had lentils last year. In general, fields that had flowering plants (crops or weed patches) in August or September of the previous year may have higher cutworm counts. These flowers attract the adult moths, which lay their eggs in these areas.

Temperature and its effect on cutworm life cycles. With lots of food (green plants) and warm soils, cutworms can move quickly through their growth stages. Assessing if cutworms are at the end of their lifecycle (and will soon stop feeding) is difficult. Instead, look for signs of possible cutworm feeding in each field. Look for bare areas, holes and notches in foliage, and plants that are wilting, toppling over or completely cut off. Bare spots will begin to appear within the field, typically on south facing slopes and hilltops where the soils are warmer and soil texture is lighter. Scout the soil surrounding newly damaged plants or at the base of healthy plants adjacent to nearby damage. Then dig in the soil to confirm the presence of cutworms and take action as needed. When found, compare cutworm densities to action or economic thresholds and remember that thresholds vary by crop type. The nominal threshold has been 25-30% plant loss but the new cutworm guide has thresholds specific to crops and to cutworm species. For example, the threshold for pale western cutworm in canola is 4-5 larvae per square metre. Recognize that low seeding rates mean low plant stand densities so also weigh cutworm densities in light of your acceptable crop stand. Find scouting tips here. See page 634 of the Guide to Crop Protection to find the list of foliar products registered for cutworms in canola.

Cutworm movement from field to field. Fields beside fields with cutworms are not necessarily at risk from cutworm larvae migration, particularly those fields with a grass barrier or road in between. Movement tends to be within fields, not field to field. (Exceptions would be army cutworm and Bertha armyworm, which can move field to field, but growers typically manage these outbreaks before they get to that point.)

Saturated soil and cutworms. Some species will suffer population losses in these conditions, particularly those that overwinter as larvae. However, the most common species – red backed and pale western – overwinter as eggs, and may not be as susceptible to saturated soils.

Natural enemies of cutworms. As the new cutworm guide suggests, helpful presence of beneficial insects is another motivation to stick to thresholds. Mortality by natural enemies (parasitoids, predators, pathogens) can reduce the severity of cutworm outbreaks.

Cutworms Appearing
Reports of cutworms (in populations high enough to warrant spraying or to destroy significant acreages where they were missed) have been reported in isolated fields right across western Canada. Cutworm damage often appears as bare patches showing up across the field. Plants in these areas will be wilted or dead and have been chewed off…
Learn to identify pest cutworms
Cutworms are showing up in big numbers in some fields across the Prairies, particularly in northeastern Alberta. Check emerged canola crops for bare patches, holes or notches in foliage, and clipped plants — telltale signs of cutworm feeding. At least four cutworm specifies may damage canola: pale western, redbacked, army and dingy. Dingy and army…
Cutworms: How to scout
Cutworm scouting begins with a walk through the field looking for bare patches, chewing damage in foliage, or clipped plants. If you find patches of missing or damaged plants, dig around healthy plants next to the missing of damaged plants. Cutworms have likely moved on to these nearby healthy plants. Many cutworms are underground during…
Insects: Diamondback moth, cutworms, flea beetle and more
Diamondback moth. Larvae have been found feeding on young canola plants, but to date these cases are few and far between. First instar diamondback moth larvae are leaf miners, feeding on green tissue inside the leaves and leaving behind the outer epidermis, causing a “windowpane” effect. Older larvae usually feed on leaf undersides. Damage to…