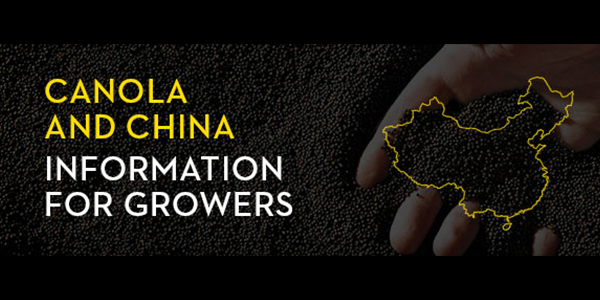 This page contains latest information about the market disruption with China, one of our biggest customers.

On May 18, 2022, Canada was advised that China has reinstated access for Richardson and Viterra to export canola seed to China. For more information, read the statements from the CCC and Global Affairs Canada.

On August 25, 2022 the Government of Canada requested a suspension of the WTO dispute settlement panel. The panel agreed to Canada’s request and suspended its work effective August 30, 2022. For more information, read the communication from the WTO panel.

What is the latest update on the Government of Canada’s actions at the WTO?

On August 25, 2022 the Government of Canada requested a suspension of the WTO dispute settlement panel. The panel agreed to Canada’s request and suspended its work effective August 30, 2022. For more information, read the communication from the WTO panel.

The Government of Canada initially raised  this issue at the WTO General Council meeting on May 7, 2019, followed by bilateral consultations between Canada and China on October 28, 2019 in Geneva. The canola industry was hopeful that this dialogue would lead to the re-establishment of full, predictable trade so that further steps of WTO dispute resolution would not be necessary. However, without progress in these discussions, the Government of Canada had moved on to the next stage, requesting a dispute settlement panel be established at the WTO. China blocked this request at the WTO Dispute Settlement Body (DSB) meeting on June 28, 2021, however the panel was established at the second DSB meeting on July 26, 2021. Read more about the stages in a typical WTO dispute on the WTO website. For more information, read the statement from Global Affairs Canada.

What is the background on the Government of Canada’s engagement with the WTO on this issue?

Discussions between the governments of Canada and China at the WTO in Geneva on October 28, 2019 were the result of the Government of Canada’s formal request for consultations under the WTO’s Sanitary and Phytosanitary (SPS) agreement on September 6, 2019. The agreement obliges all measures restricting trade to be based on science. Read the Government of Canada statement and CCC release.

In the spring of 2019, Canada initially raised concerns about China’s treatment of Canadian canola at the WTO, pressing China to show evidence of their quality concerns. At the WTO General Council meeting on May 7, 2019, the Canadian ambassador told WTO members, including China, that, “Canada has repeatedly asked China for the scientific evidence that supports its findings and the measures taken – but China has not been forthcoming in providing this information.” During his remarks the ambassador highlighted how an “open and predictable rules-based international trade is the only way global commerce can succeed.” After noting that Canada has tested the shipments in question twice and found they comply with Chinese requirements, Canada asked China to “engage in solution finding” as Canada has done using every available channel. Read the Canadian ambassador’s full statement.

What is the current situation affecting canola seed exports to China?

On May 18, 2022, Canada was advised that China has reinstated access for Richardson and Viterra to export canola seed to China. For more information, read the statements from the CCC and Global Affairs Canada.

Since market access issues affecting canola seed trade started in early March 2019, the licenses of two companies, Richardson and Viterra, to export canola seed to China had been suspended. Other exporters were seeing some purchases of canola seed, with exports down between 50 and 70 per cent compared to pre-blockage levels. Seed exports to China have fallen from $2.8 billion in 2018 before the restrictions, to $800 million in 2019, $1.4 billion in 2020 and $1.8 billion in 2021. Expert analysis estimates this has cost the industry between $1.54 and $2.35 billion from lost sales and lower prices between March 2019 and August 2020. For more details, see the March 4 CCC news release and latest canola export stats.

Does this affect canola oil and meal exports?

Canola oil and meal were not subject to the same challenges as seed.

What were the license suspensions based on?

China had indicated a quality concern with Canadian canola seed related to specified quarantine pests that include weed seeds and plant diseases. These were identified in the public notices of non-compliance issued to Richardson and Viterra by China’s customs agency. The Canadian Food Inspection disagrees with the assessment of China’s customs agency.

Technical discussions about these pests of concern did not lead to an immediate resolution. We are confident in the quality of Canadian canola. Our canola consistently meets the requirements of countries around the world.

What does this mean for new contracts and deliveries?

Limited seed sales to China impacts the demand for and value of canola. Canola seed exporters are supplying customers in other countries. Growers are encouraged to contact their local grain buyer to discuss marketing options.

Should growers cut back on growing canola?

Growers, as always, need to make their own choices, and consider many factors when making seeding decisions. We believe the fundamentals of trade with China are strong – we have an industry strategy to ensure a sustainable and growing supply of high-quality canola in Canada, and growing demand in China for high quality oil and protein. We have a challenging situation in China at this time but believe the basis for trade in canola between the two countries remains solid.

What relief is being provided to canola growers who are feeling financial pressure?

In 2019, the Government of Canada implemented new regulations to increase loan limits under the Advance Payments Program (APP). Growers can contact their APP provider for more details, and find more information from the Canadian Canola Growers Association.

How is the Canola Council responding?

The Canola Council, which includes growers, continues to work closely with the Government of Canada to nurture and maintain a predictable, rules-based trade environment. The Canola Council believes more action is necessary to diversify canola markets, including enhancing market access in the Indo-Pacific region and supporting the market for canola-based biofuels. Read more about the Canola Council’s advocacy priorities and market access plan.

May 18, 2022: Canola Council statement on China’s removal of restrictions for canola exporters

April 28, 2020: Recording of grower update call on trade with China and COVID-19

September 4, 2019: Canola Council statement on the appointment of an Ambassador to China

May 1, 2019: Helpful support for canola producers

April 1, 2019: Canola Council president and CCGA CEO speaking to MPs at the House of Commons Standing Committee on Agriculture

March 6, 2019: Canola Council of Canada statement on trade with China

May 18, 2022: Statement by Minister Ng and Minister Bibeau on China’s removal of restrictions on Canadian canola exports

May 1, 2019: Government of Canada taking action for Canada’s canola sector