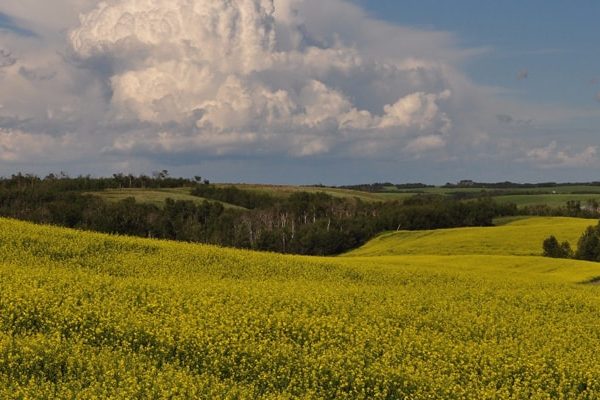 Diversified crop rotations can have many benefits, especially with insect and disease management. A two- or three-year break between canola crops will significantly reduce viable spore counts for clubroot and blackleg in particular, making rotation an import step in managing these diseases. Rotation can also improve crop yields, increase soil organic carbon and reduce selection for weed resistance. Growers striving for diversity will include cereals, pulses, and oilseeds in their rotations. Some will also add perennial crops.

Have at least one year, preferably two or three years, between canola crops. Canola seeded into canola stubble yields an average of 10 per cent to 20 per cent less than canola seeded into cereal or pulse stubble. In a rotation that has canola every second year, growers should increase the level of pest management diversity by using different modes of action for weed, disease and insect control. Fields with a short interval between canola crops should be scouted more frequently and intensively for pests and other rotation related issues. Keep accurate records to identify any trends towards increasing problems that may indicate a need to decrease canola frequency in the rotation.

Canola seeded into canola stubble yields 10 per cent to 20 per cent less, in general, than canola seeded into cereal or pulse stubble. Farmer-reported yield data from provincial crop insurance records demonstrate this clearly and consistently in Alberta, Saskatchewan and Manitoba.

Additionally, this yield relationship can be demonstrated in replicated field trials. AAFCAgriculture and Agri-Food Canada is a department of the Government of Canada. More found that canola yield was shown to increase between 0.2 – 0.36 megagrams per hectare (3.5-6.5 bushels per acre) with every annual increase in the number of years between canola crops 1.

A number of factors may contribute to this drop in yield, either alone or in combination. Some of these include shifting or increasing disease, insect, or weed populations, declining soil fertility, and/or reduced available moisture throughout the typical canola rooting depth (unless rainfall is able to fully replenish it). When a crop is grown continuously, pest populations adapted to that crop will increase. Rotating crops tends to reduce pest build-up, especially immobile types that do not move in readily from nearby crops or on the wind.

Blackleg was the key reason behind the one-in-four rotation recommendation that was commonly promoted to growers a few decades ago. In the 1980s and 1990s, many leading canola varieties did not have strong resistance to blackleg and growers could see substantial yield losses if fields didn’t get at least a two-year break for blackleg to break down in the soil. All modern varieties have blackleg resistance, and while that resistance is beginning to be overcome in some locations for some varieties, genetic resistance is still an effective way for most growers to manage the disease in a tight canola rotationA high ratio of years growing canola compared to years not growing canola (a high frequency of years canola is grown out of the total number of years considered in a crop rotation). More. Long term, however, tight rotations of varieties with similar genetic resistance have over time selected for blackleg races that are more virulentA form which causes infection (and can result in a disease) More against that resistance.

Tight rotations can also cause seedling and root pathogens such as fusarium, pythium and rhizoctonia to build up in the soil.

Clubroot spore loads will increase with a tight rotation, especially if growers are not using clubroot resistant varieties. Research in Canada suggests that while a two-year break from canola can result in a 90 per cent reduction in spore loads in soil, disease severity and yield may not be improved. Even when using clubroot resistant varieties, both continuous canola and canola with a one-year break can have substantial yield losses, while canola grown between two, three, and four-year breaks may not have significant yield reductions. For that reason, a minimum of a two-year break is advised, with three and four-year breaks being preferable 2.

Rotation with cereals will reduce canola disease, provided that volunteer canola and cruciferousPlants belonging to the family Brassicaceae or (previously referred to as) Cruciferae. More weeds are controlled in the cereal break crops. Also, rotation with canola can reduce many cereal diseases such as common root rot, take-all and tan spot. Australian research has documented a significant reduction in take-all disease of wheat following canola, indicating that canola has a biofumigation effect.

Rotation with other crops will not necessarily reduce the disease risk. Yield reductions may occur when canola is grown on stubble of other crops susceptible to the same diseases. For example, broadleaf crops, especially those in the Brassica family (ex. mustard), can be hosts to diseases found in canola (Table 2).

Root maggots (for which there are no insecticides available for in canola) have been shown to escalate quickly in fields of continuous canola. This coincides with reduced yields. Based on average canola prices, the yield losses quantified in one study were equivalent to $108-$140 per acre after only three years of continuous canola. The study also found that a one-year break did appear to make a significant reduction in losses from root maggots 3.

Pinning these yield losses on root maggot alone may not be entirely accurate. Disease may have also played a role in yield losses. Root maggot feeding can provide an entry point for disease, or thin stands caused by seedling disease may result in more intense root maggot feeding. Research from the mid-1990s found that the greatest root maggot damage occurred in stands planted at half the recommended seeding rate. Lower stand densities produced plants with larger basal stem diameters, and larger basal stem diameters were correlated with statistically significant increases in root maggot damage.

Tight rotations and the general increase in canola acres will also favor many other insects, especially those capable of overwintering in Canada, and may increase the selection pressure for resistance to common canola seed treatments or foliar insecticides. AAFCAgriculture and Agri-Food Canada is a department of the Government of Canada. More research found that flea beetles in Ontario were starting to develop resistance to some older foliar insecticides that had been applied.

Hybrid canola removes as much soil nitrate as wheat, so high yields in tight rotations with canola and wheat will result in low soil nitrate levels. Therefore, higher fertilizer rates may be required to maintain intensive canola rotations when high yields are being achieved.

One reason for lower yields in canola grown directly after canola may be due to fertility. Crop insurance data, which is based on grower-reported yields (and does not factor in any additional variables used to grow the crop), showed that the same fertility mix was used for growers seeding canola into canola stubble or into wheat stubble.

Alternate crops in the rotation allow different herbicides to be used and thus can provide better overall weed control in the long term. Rotating crops and herbicides also helps to rotate herbicide groups and thus reduce the build-up of herbicide-resistant weeds.

Canola volunteers and other weeds not controlled easily in canola will become worse in a tight rotation. These weeds in particular will require a concerted effort to ensure effective control in rotation crops. Tight canola rotations couple with a limited spectrum of herbicide groups that dominate most canola acres, means increased likelihood of finding resistant biotypes and allowing them this group to increase in number within the field.

However, adding other crops to a canola-cereal rotation may increase the risk of herbicide carryover. For example, applying Odyssey to a pea crop ahead of canola is not recommended, and could increase the risk of imazethapyr damage to canola the following year. See table 1 for other examples.

Crop rotation impacts on other factors

The following may not influence canola yield potential directly, but could increase or decrease costs required to achieve the same yields.

No single crop rotation will suit all circumstances. The choice of which crops to grow, and in what sequence, depends to a large extent on the soil and climatic conditions and management skills. In areas with adequate moisture, rotations that include cereals and broadleaf crops maintain pests at lower levels and produce consistently higher yield. An added benefit is that yields are often more stable because crops differ in their response to stress at various stages. Therefore, stress may damage one crop seriously, but others in the rotation may be less affected. Use the information in Table 1 as a guide in selecting a field for canola. Also consider crop rotation information from MASC when considering crop rotation.

The purpose and value of a three or four-year crop rotation is to maintain diversity in the cropping system. Cereals and pulses generally host different insects and disease than canola, and cereals and pulses offer other options for weed control.

If growers plan to seed canola more frequently, they should increase the level of pest management diversity by using different modes of action for weed, disease and insect management. Crop scouting and recording of issues observed should be intensified to help identify any trends that may indicate problems developing from inadequate rotation break between canola crops.

Crop rotation: Economics and agronomy
Estimates are for another rise in canola acres in 2018. This will add further short- and long-term yield and agronomy pressure on fields that are already in tight rotations. AAFC…
Crop rotation: Canola's fit with other crops
Rotation between canola crops has known benefits for management of blackleg, clubroot and root maggot and an overall improvement in canola yield. A one-year break between canola crops provides a…
Canola rotation studies – canola, cereal (corn), soy (oilseed)
PURPOSE: To gain a better understanding of how canola can fit into existing cropping systems in Eastern Canada, this four-year study was conducted at three locations in Nova Scotia, Ontario…
Risks from a tight rotation
Canola on canola yields less, in general, than canola grown on any other stubble. Reasons for this yield drop could include one or a combination of the following factors: Disease.…