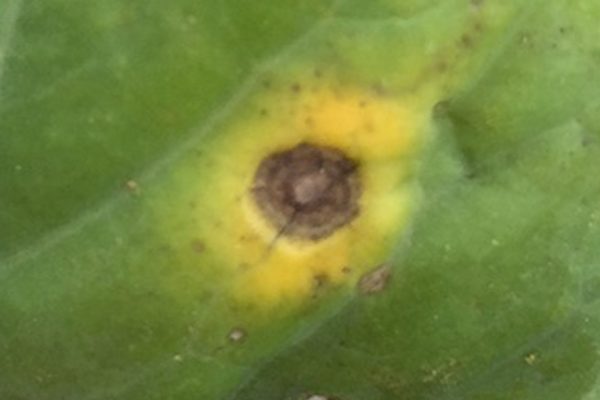 Alternaria black spot is a plant disease caused by several species of fungal pathogens in the Alternaria genus. This minor disease does not affect Brassica napusAlso referred to as Argentine canola, it is the species of canola currently commonly grown in Canada. More canola cultivars until late in maturity when these plants have shed their waxy coating over leaves and stems. B. rapaAlso referred to as Polish canola, it is the less commonly grown species of canola currently grown in Canada. More and B. junceaAlso referred to as brown mustard, it is a minor crop (from the Cruciferae or Brassicaceae plant family, commonly known as the mustard family) grown in Canada. More cultivars are more susceptible. Wet and humid conditions favour disease development, but fungicides can prevent it for situations of high risk.

Alternaria black spot is caused by the fungi Alternaria brassicae, A. alternata and A. raphani. Although alternaria is present every year on the Canadian Prairies, the severity of this disease varies considerably between years and areas, based largely on the moisture and temperature situation. The disease can infect all growth stages of the canola plant.

Canola plants vary in their susceptibility to alternaria black spot attack throughout their development. Aging plants are more susceptible than young or intermediate-aged plants. Therefore, alternaria black spot epidemics intensify at flowering and reach their maximum intensity in ripening plants. A heavy infection on leaves and stems reduces photosynthetic potential of the plant, but is generally not damaging early in the season. However, when the disease spreads extensively onto green pods, it may increase the green seed count and seed chlorophyll content, and cause premature pod shatter, shriveled seed, lower thousand kernel weight and reduced oil content.

Alternaria black spot disease causes symptoms in the seedling stage on cotyledons and in later growth stages on leaves, leaf petiole, stem, flowers, pods and seeds. Infected seed may rot in the ground or produce seedlings with dark spots on the cotyledons. Some infected seedlings may also exhibit damping-off or wirestem disease. All above ground plant parts are susceptible to infection.

The disease first appears on the cotyledons in the form of small light brown lesions that soon turn black due to the appearance of spore masses (under humid conditions) and act as a source of infection for other parts of the plant. The initial infections on lower leaves develop distinct brown to blackish lesions or spots with yellow halos around them. The lesions vary in size (one to 20 millimetres or 0.04 to 0.8 inch) and colour, depending on environmental conditions. They may be entirely grey under moist conditions, and grey with a purplish or black border, or entirely black under less favourable conditions. These lesions can multiply rapidly and later spread to the upper leaves, stem and pods.

On severely infected leaves, several lesions unite to cause defoliation under humid conditions. Stem and pod lesions first appear as small brown or black dots that may develop into conspicuous spots or longer and wider lesions of various shapes. The spots or lesions may be entirely black or have a dark border with a greyish white centre. In severe outbreaks, the upper part of the stems and pods wither. Pods may show sunken, dark brown to black circular lesions. Deep lesions on pods cause infection in the seed. Diseased seed just beneath the black spots on the pods can be small, shriveled, and grey to brown. Grey or black seeds that are dark green inside are likely damaged by black spot and are unlikely to change colour in the swath. Infected pods may ripen prematurely and shatter while the crop is standing or in the swath.

The fungi that cause alternaria black spot overwinter on infected crop residue, on cruciferousPlants belonging to the family Brassicaceae or (previously referred to as) Cruciferae. More weeds and to a lesser extent on or in seed (Figure 1).

The cycle continues throughout the season under favourable conditions. Alternaria black spot epidemics intensify at flowering when heavy crop canopies promote humid conditions. Epidemics reach their maximum intensity in ripening plants. High concentrations of airborne spores are needed to initiate development of severe epidemics on canola leaves and pods. Early lodging and cool wet weather in the podding stage become critical factors that lead to major outbreaks. Lodged canopies remain wet longer promoting greater spore production. Hot and dry conditions can interrupt alternaria black spot epidemics as the absence of moisture greatly reduces spore production. Black spot disease can be quite variable across a field with more serious infection levels on lower slopes (which generally have higher moisture and/or humidity) than on upper slopes (which tend to be drier). Seeds may become infected following development of lesions on the pods. At harvest, spores produced on stems, branches and pods may also infect the seed in the combine.

Crop rotation has a limited effectiveness in controlling alternaria black spot. Frequently, fields that have not had canola grown for several years can experience the disease, causing considerable damage, despite the rotation. Alternaria spores are excellent wind travelers and can spread to areas remote from the location of production. Small plot research has shown that three to four years is the time it takes for canola stubble to decompose on the Prairies. However, spores can still be blown in from stubble on neighbouring fields. Utilizing non-canola years in the rotation to control cruciferousPlants belonging to the family Brassicaceae or (previously referred to as) Cruciferae. More weeds and volunteer canola is useful.

Buried stubble cannot release alternaria black spot spores. However, the amount of disease control is usually proportional to the effectiveness of residue burial. Unfortunately, under conditions favourable for disease spread, alternaria black spot can spread even if less than 10 per cent of crop residues are left unburied.

Planting well-cleaned, high germination pedigreed seed is recommended. Use seed free of small, shrunken, and infected seed to reduce the seed-borne level of alternaria. In the laboratory, alternaria can be observed in the germination test for canola. It is identified by greyish-white myceliumMicroscopic fungal filaments More that covers an infected seed or has spread to a nearby seedling. Presence of alternaria is often noted on the seed lot certificate.

Registered seed treatments are effective in reducing seed-borne inoculum and increasing seed germination. However, planting treated seed will not safeguard against alternaria black spot since the disease-causing fungi also overwinters on plant residue and the spores can spread by wind.

Early swathing of badly infected crops may reduce serious losses from shattering. Swath fields infected with alternaria black spot, as straight cutting extends the time period over which shatter damage (due to this disease) occurs. Any practice that allows the crop to dry more quickly following a rain or dew may reduce the impact of this disease. Adequate, balanced fertility and lower plant populations will help reduce early lodging. Adjust swathers to produce open (wider, less dense) rather than heavy swaths. Avoid the use of wide swathers in heavy stands and avoid swathing in the rain. A lighter swath exposed to good airflow and rapid drying is less at risk.

Factors that cause plant stress are known to increase the plant’s susceptibility to alternaria black spot disease. A nutrient deficiency can cause stress. Follow soil test recommendations to ensure adequate fertility of both macro and micronutrients. Sulphur-deficient plants tend to be more susceptible to this disease. Apply insecticides when warranted, since insect injury predisposes plants to alternaria black spot disease.

Alternaria can make hailed pods brittle
Alternaria has infected the pods of many hailed crops. (See photos below.) Keep watching these crops. When infected areas make up 50% or more of the crop, swathing early may…
Disease update: Sclerotinia, clubroot, blackleg, alternaria
Lots of sclerotinia stem rot. As harvest progresses, we’re hearing reports of higher levels of sclerotinia stem rot in some regions. Some fields that did not get a fungicide spray…
White leaf spot and grey stem
White leaf spot and grey stem are both canola diseases caused by the fungus Mycosphaerella capsellae (anamorph Pseudocercosporella capsellae). White leaf spot and grey stem are widespread throughout the canola growing…
Swath timing and disease
Swath timing should always be based on the stage of plants that will contribute the most to yield. Plants senescing early due to disease will not likely produce many viable…