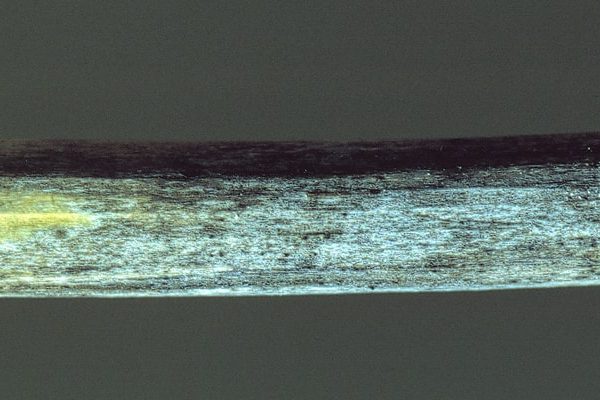 White leaf spot can first appear on leaves. These lesions frequently appear at leaf margins and are small grey-brown necroticA symptom of plant cell or plant tissue death. More spots about one to two millimetres in diameter, which grow to a tan-coloured lesion five to 10 millimetres in size. The lesions can be confused with downy mildew. Severe leaf spotting can result in premature leaf loss. The grey stem symptoms appear later in the canola crop’s development in the form of large purple to grey-speckled stem and pod lesions. At harvest some plants may be completely discoloured and frequently the entire field turns a purple or grey colour. Disease symptoms may appear earlier in the season on crops under stress from lack of moisture, insufficient nitrogen or severe competition from weeds.

The disease-causing fungus overwinters as thick-walled myceliumMicroscopic fungal filaments More on crop residue and produces wind-borne spores in the spring that infect canola plants. Following infection in early summer, lesions develop on lower leaves. These lesions produce wind-borne spores that re-infect other plant tissues, causing the rapid spread of the disease in the ripening crop. The disease is usually not seed-borne. The disease has a wide host range among cruciferousPlants belonging to the family Brassicaceae or (previously referred to as) Cruciferae. More weeds, including shepherd’s purse, hare’s ear mustard and ball mustard.

Identifying verticillium. Or is it blackleg, sclerotinia or grey stem?
We don’t know how common verticillium is in canola across the Prairies. We don’t know how severe it can get or how much yield loss it can cause. And we…
Alternaria black spot
Alternaria black spot is a plant disease caused by several species of fungal pathogens in the Alternaria genus. This minor disease does not affect Brassica napus canola cultivars until late…
Blackleg symptoms found on two-leaf canola
Blackleg lesions were reported this week on some canola fields, which is much earlier than first detection last year. Early blackleg infection — from the cotyledon to 3-4 leaf stages…
How to tell blackleg from sclerotinia stem rot
Some regions are reporting higher rates of blackleg and most regions are seeing sclerotinia stem rot damage. Fungicide is not effective at this stage of the season, but the weeks…