Home / Canola Watch / Identifying verticillium. Or is it blackleg, sclerotinia or grey stem?

Before investing in verticillium research for canola, it would help to turn these “don’t knows” into “knows”. To do that, Canola Watch is calling on agronomists to look for plants with verticillium-like symptoms and to send these plants in for disease identification. (Note, labs can identify verticillium, but most cannot identify the specific species.) 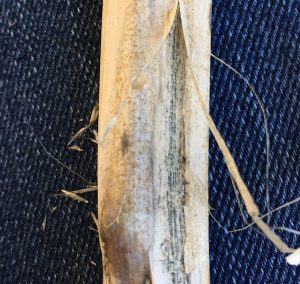 Verticillium is one disease that can be more obvious and easier to identify after swathing or straight combining. As the plant dies, look for: (1) Streaking on the outside of stems. (2) Specks of verticillium microsclerotia under the stem’s skin. As cut stems start to dry, these microsclerotia will be widespread on infected plants. Use a hand lens to look for them. (3) Peeling of the outer skin.

Verticillium needs moisture to get into the plant from its soil-borne spores, but infection then accelerates in dry conditions. With a dry August in 2017, conditions would seem to favour infection.

If confirmed, check nearby fields next year for incidence (the percentage of plants with symptoms) and severity (how bad the symptoms appear).

Post-harvest scouting for verticillium and other diseases
Disease scouting long after swathing is not usually the most accurate, as saprophytic organisms — those that feed on and break down dead material — move in fast and cloud the identification process. Verticillium is one disease that can be more obvious and easier to identify after cutting a canola crop. As the plant dies,…
Disease update: Sclerotinia, clubroot, blackleg, alternaria
Lots of sclerotinia stem rot. As harvest progresses, we’re hearing reports of higher levels of sclerotinia stem rot in some regions. Some fields that did not get a fungicide spray are at 40-50% infection. That works out to an estimated 20-25% yield loss, or 10-13 bu./ac. on a canola crop with 50 bu./ac. yield potential.…
Remember to include verticillium stripe on your disease scouting list
While you are checking your canola fields for potential clubroot, blackleg or sclerotinia symptoms, also keep your eyes open for any symptoms due to verticillium stripe. This disease has already been found on some earlier fields in Manitoba this year, but is easiest to diagnose at harvest time. Much like other diseases, symptoms for this…
How to tell blackleg from sclerotinia stem rot
Some regions are reporting higher rates of blackleg and most regions are seeing sclerotinia stem rot damage. Fungicide is not effective at this stage of the season, but the weeks leading up to harvest are a good time to scout. Large lesions — the ones that will lead to yield loss — are easy to…