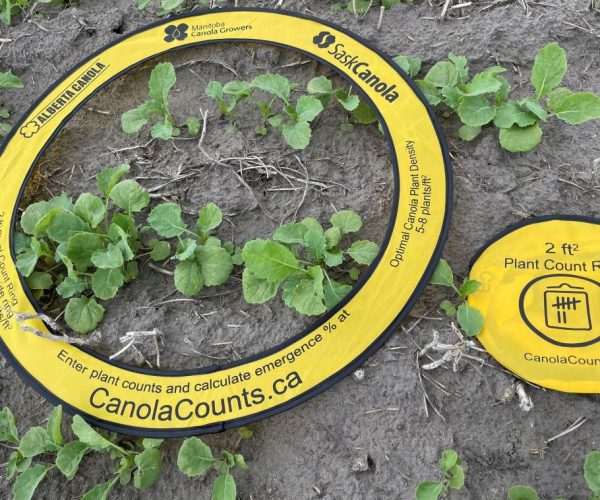 The Canola Counts survey tool was developed by the Canola Council of Canada with support from Alberta Canola, SaskCanola and the Manitoba Canola Growers. It was built to help drive the adoption of plant establishment assessments while tracking progress towards canola industry production goals.

Many canola fields are still averaging 50 to 60 per cent emergence, which means that of every 10 seeds planted, four to five of them fail to emerge and contribute to yield. Conducting plant establishment assessments in every field, every year, will help identify plant establishment challenges and strengths, and can lead to yield improvements for canola growers.

This map includes data from locations within the canola growing region of Alberta and the B.C. Peace River region (in the northeast corner of B.C.).

While most of Alberta had low soil moisture reserves going into seeding in 2021, timely rains meant that many canola acres emerged with decent initial moisture. Frosts in late May and early June caused damage to recently emerged canola, though the earlier frost hit before actual emergence for many acres in the central Alberta and Peace River regions.

There appeared to be less spring flea beetle pressure in southern Alberta compared to previous years, though there were fields across the province that saw feeding damage above thresholds.

As spring progressed, dry conditions in the Peace River region and southern Alberta persisted, expanding to include much of central Alberta. The whole province saw exceptional heat and dry conditions after establishment which is expected to impact yield and time to maturity.

For more details on weather conditions in this region, see these Agriculture and Agri-Food Canada maps and for additional crop details, see the Alberta crop report.

Spring conditions in the canola growing region of Saskatchewan started with good soil moisture, but some areas experienced dry seedbed conditions.  As a result, some growers increased seeding depth in an attempt to seed into moisture. Most areas received rain after seeding, some of which was rapid and forceful and caused emergence issues, especially for deeper seeded fields.

Overall numbers of spring flea beetles seemed to be lower than previous years, although there were still heavily infested pockets through the province.

The whole province saw exceptional heat and dry conditions after establishment which is expected to impact yield and maturity.

For more details on weather conditions in this region, see these Agriculture and Agri-Food Canada maps and for additional crop details, see the Saskatchewan crop report.

A dry, open spring in in the canola growing region of Manitoba allowed farmers an early start on seeding. Dry conditions continued through most of May, along with cool soil temperatures, delaying canola germination and emergence. Farmers were left with the decision of whether to wait to plant their canola into warmer conditions or to seed deeper to place the seed into moisture.

A timely May long weekend rain across the province allowed for early seeded crops to emerge just in time for a severe late May frost.  This frost event resulted in many acres being resown and created further variability amongst plant stands. Later-seeded crops emerged during an early June heat wave which saw temperatures well above 35oC. This heat, coupled with high winds and low soil moisture reserves, caused significant plant stress and slowed crop growth and development.

The slow growth and stress on the crop allowed for flea beetles to get a jump on the crop. Variable plant populations were seen across the province because of a combination of environmental extremes. For more details on weather conditions in this region, see these Agriculture and Agri-Food Canada maps and for additional crop details, see the Manitoba crop report.

How do your fields measure up? New Canola Counts tool helps growers assess and improve plant stands
Latest News
May 17, 2021 – Canola Counts, the new crowd-sourced survey from the Canola Council of Canada (CCC), is now live through CanolaCalculator.ca or directly accessible at CanolaCounts.ca. The survey tool will map canola plant densities and emergence percentages while helping to drive the adoption of regular plant counts as an important step in achieving target yields.…
Do I bother with canola plant counts?
Plant counts can influence management decisions for the current crop (if counts are low, you’ll need to protect all of those plants) and for next year’s seeding rate and plant protection decisions. Plant counts are an important part of the checklist for your post-emergence assessments. Missing plants? What’s the cause? An accurate average plant stand…
Impact of management and environment on canola establishment based on survey data
Many canola fields across the Prairies do not have the plant stands needed to meet yield potential. That’s according to surveys in Alberta in 2010 and Saskatchewan in 2012. For the majority of canola producers, improved crop establishment would help their yields. This is one result from a survey of actual canola fields and interviews…
Plant counts at establishment: How often? Why?
One plant count after emergence may not be enough to tell you about seed survival and whether the seeding rate and seeding tool did the job it was supposed to do. Seedling diseases, flea beetles, frost and other factors can influence seed survival, and unless scouting and counts are done repeatedly through the first few…