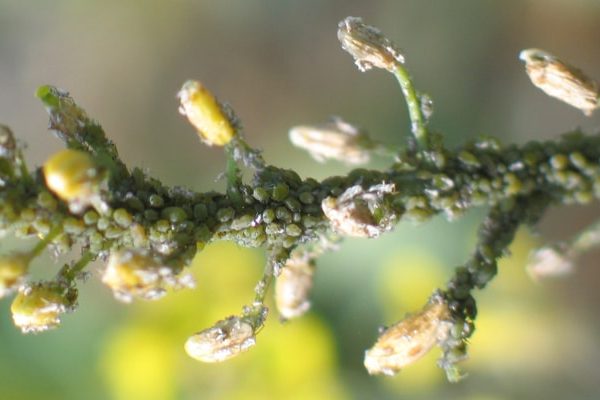 Several aphid species, including the cabbage (Brevicoryne brassicae L.) and turnip aphid (Lipaphis erysimi (Kaltenbach)) amongst other species, can be found in western Canadian crops. While aphids are not uncommon, they rarely cause economical damage to canola. These small, soft-bodies insects are also food to many beneficial insects that may live in canola fields and help control aphid and other pest populations. Proper identification when scouting is always critical, before considering economic thresholds.

Aphids are not considered a common pest of canola crops in western Canada, but they can occasionally   become abundant. Noticeable numbers may appear at the tops of plants in late July to early August. The aphids can migrate in after completing several generations. An aphid colony will cover the entire top 10 to 15 centimetres (four to six inches) of plants. In most cases, only individual or small groups of plants are infested within a field.

The damage is rarely significant in western Canada since the bulk of pod formation is completed prior to aphid populations developing, and the damaged top few young green pods contribute little to the overall yield. Aphids can be a significant pest in location with other climates, such as winter canola in Kansas or Oklahoma 1 or in greenhouse cultivation.

For the turnip aphid (Lipaphis erysimi (Kaltenbach)), control may be required if there are more than 25 aphids per 10 centimetre shoot tip on 10-20 per cent of the examined plants (when plants are at the late flowering stage) 2.

Spraying is not generally economical. Several beneficial insects, including parasitic wasp larvae, ladybird beetles and lacewing feed primarily on aphids. The populations of the beneficial insects can increase as aphid populations increase, sometimes in numbers sufficient to control the aphids.

Aphids: They cluster like crazy but is spraying economical?
To answer the question, not likely. In most cases, only individual or small groups of plants are infested. Noticeable numbers usually appear at the tops of plants in late July…
Late-season insects and pre-harvest intervals
We had reports this week of bertha armyworm at higher numbers (maybe not at thresholds) in some very localized areas, lygus (it’s getting late), flea beetles (don’t spray them, it…
Insect update
Lygus. Some Alberta fields have had 6-8 adults per 10 sweeps in the past week. Any field getting 0.5 to 1 lygus per sweep at early flowering should be monitored…
Rotations for insect control
Tight canola rotations can increase yield loss from root maggot damage. New research from Lloyd Dosdall and Agriculture and Agri-Food Canada looked at 13 different rotational regimes. Data showed a…