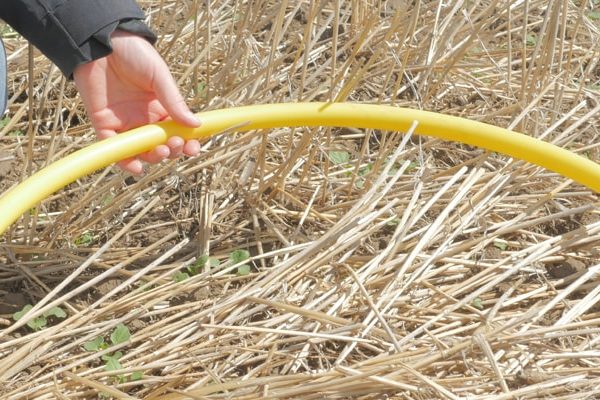 Assessing canola from the two- to four-leaf stages (and again after harvest to better understand any in-season plant mortality) will help growers understand their optimum plant densities and identify areas for improvement in canola stand establishment. This can help with reseeding decisions and seeding rate assessment, and in future decisions about pest threats and whether thresholds should be lowered if plant stands are at critical low levels.

When evaluating the stand:

To take plant counts with a hoop (watch video above):

To take plant counts with a metre stick:

Do not include volunteer canola plants in any plant density counts or emergence calculations. Look for blue seed coats attached to seedling root systems and avoid counting plants which are growing outside of seed rows.

For all methods of counting plants, several counts per field are required to get good representative average plant density and emergence percentageThe average number (percentage) of seedlings that have grown out of the number of seeds planted this spring..

If emergence is patchy, dig up parts of seed rows to look for non-germinated or non-emerged seeds and plan to return and reassess. If canola density and staging is non-uniform throughout the whole field or in patches, make note of those areas and investigate the cause. Dry soil and frost may be difficult to avoid, but plants stunted or lost because of poor seed placement, fertilizer placement, fertilizer rates or surface residue can serve as a good indication of weaknesses in a stand establishment system.

Monitoring fields should start 10 days after seeding if conditions are good, or 15 days if conditions are cool. If the plant stand is lower than expected for the given seeding rate, seed size and estimated seedling survival, then check equipment settings, seed characteristics and field conditions to identify why the ideal plant population was not achieved. The cause or causes may relate to the seeding operation, such as inconsistent depth, excess fertilizer placement with seed or mechanical issues. Frost, wind or flooding, insects or disease, or herbicide residues could also be factors.

When stands are spotty and thin, careful management is required to preserve the surviving plants. More conservative thresholds may be warranted for insects, weeds and diseases.

Each year fields or portions of fields suffer from poor emergence or from damage after emergence by frost, hail or insects. The crucial question to answer is whether reseeding will result in greater net profitability without significantly increasing risk? To aid in this decision, carefully consider the cause and severity of the damage, the percentage of the field affected, soil moisture, weed competition (amount, stage and type), reseeding costs and calendar date.

An accurate assessment of crop injury is essential. Take the time necessary to assess plant survival. Damage may not be as bad as it seems at first. Yield potential of the crop may also be better that you think. Canola seedlings damaged by frost, wind or hail need several days to recover before accurate assessments of survival can be made. Severe damage to cotyledons and true leaves that cause yellowing, browning or blackening of outer leaf tissue does not mean that seedlings are dead.

If the growing points and hypocotyls (the stem from the seed to the above-ground growing point) remain intact and turgid, those plants should survive. Recommendations are to re-assess those plants four to 10 days after the damage has occurred. At this time, small leaves will begin to emerge from the growing points, indicating that the plants will survive. If no new leaves emerge, survival is unlikely.

With successive nights of frost, the recovery period may be one week or more from the initial injury before new leaves begin to be noticeable. Seedlings that have been mortally injured will have either darkening of the growing point itself or pinching and browning of the stem below the growing point. In some cases, only the top of the stem is pinched causing the top to lean. Look for new growth out of the growing point several days after the last damaging event. In other cases, the whole stem withers and the seedling collapses on the ground. If that occurs, the plant is likely dead.
Even if many plants have been killed, reseeding may not be the best response. During early growth, most canola stands can sustain substantial seedling mortality without significantly affecting yield due to compensatory branching of surviving plants. Make random plant density counts from the damaged field. The larger the area of damage, the more counts should be made.
Ensure the majority of the field contains the minimum plant number that can produce an acceptable yield. If not, then reseeding part of the field or the whole field may be the best economical response.

As a reasonable guideline, plant densities of 20 to 40 plants per square metre (two to four plants per square foot) can be adequate to produce a viable crop, provided weed competition can be effectively controlled.

Thin stands such as these probably will yield 90% of a normal stand seeded at an early date, and could mature later. This is still an advantage over crops replanted late in the season, which typically yield less than earlier plantings that have poor stands. Although some reseeded crops manage to yield the same as very thin crops (which haven’t been reseeded), they incur more costs due to reseeding and, therefore, result in lower net returns.

Take a plant stand count
While scouting for disease and insects, take time to assess the stand. If the stand is spotty and thin, be more conservative with thresholds when protecting the crop from insects, diseases and weed competition. Also, recording the average number of plants per square foot will help growers improve seeding methods for 2011. Stands of…
How to take a plant stand count
To take a plant stand count, start with a simple tool with a known area. The photo shows a small hoop with an area equivalent to one quarter of a square metre (56 cm across.) Place the hoop into the crop, counting the number of plants inside, and multiplying by 4 to get plants…
Plant stand counts: WHY and HOW
WHY should I count canola stems in the fall? Counting stubble density in the fall can help growers determine if their spring seeding rate was adequate to reach the crop’s yield potential. Canola generally needs a bare minimum of 4-5 plants per square foot to reach its yield potential. By collecting a few years’ worth…
Management for a thin stand
Thin and uneven stands are common this year — and for a variety of reasons. Many stands have fewer than 4-5 plants per square foot with staging from cotyledon to 3-leaf. The minimum critical plant population for canola is 4-5 plants per square foot. At that level, canola can still yield 80-100% of an ideal…