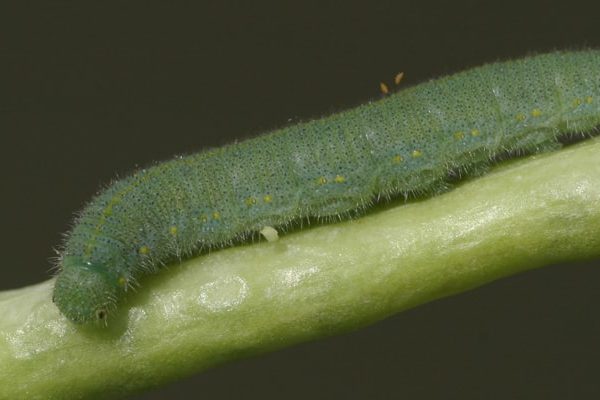 These occasional pest insects haven’t been reported to cause economic damage in canola on the Prairies. However, proper identification of the larval stage of the species that share this common name is important to distinguish them from other small green worms that may be found in a field. Since the adult moths only feed on nectar, they don’t cause damage in their final life stage.

Imported cabbageworms are green with a velvety texture, and have a faint yellow stripe down their backs. The checkered white cabbageworm larvae has brilliant blue and yellow stripes down its back, while the southern cabbageworm pupae are bluish gray with white stripes and small black dots. The adult stages of all three species are white butterflies with black dots or markings that fly around during the day.

There are two or three generations per year.

Under ideal conditions a cabbageworm life cycle could be completed in as little as 30 days, including four to eight days as an egg, 11 to 22 days as a larva, 10 days in pupation and five days as an adult moth 1.

Cabbageworm populations have not been reported in sufficient number to cause economic damage in canola.

Female moths use glucosinolates and related products to assist with recognizing suitable plant hosts, which explains their ability to recognize and severely damage single rows of plants related to canola, such as cabbage. In a field situation, the cabbageworms feed on canola leaves but do not cause economic losses.

Butterflies in canola
We had an email this week from a farmer who saw a lot of painted lady butterflies (not the larvae) and he was wondering what to do about them. Butterflies…
Insect update: Lygus, bertha, checkered white butterfly
Lygus study in Saskatchewan. Tyler Wist at AAFC is looking for growers who plan to spray for lygus. He would like them to leave four untreated check strips in the…
Which worm is it: bertha, diamondback or cabbage?
Many growers are spraying for bertha armyworm, even though a forecasting program based on collecting adult moths in pheromone-baited traps had reported low bertha armyworm moth counts in most areas.…
Lots of green worms. What are they?
Before spraying, make sure your canola is at the right stage to be damaged by the worms and that the worms are actually the species you’re trying to control. Here’s…