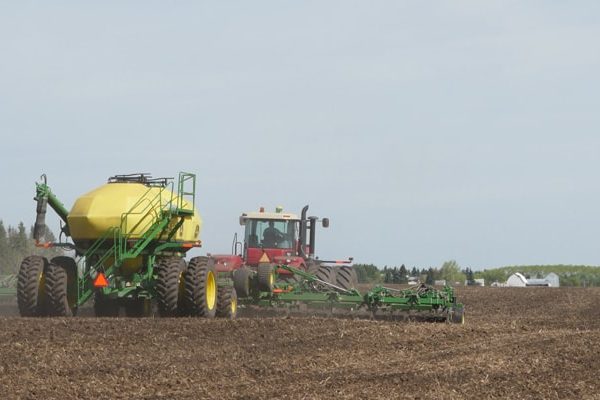 Although weather and environmental conditions can have an impact on when a field is seeded, setting at target seeding date for a canola crop can be chosen by the grower. In making this decision there are many factors to consider and the outcomes of seeding date can have a varying impact on seed yield, quality and potentially even next year’s crop.

The yield advantage for early seeding — with all else being equal — can be significant. Seeding early, providing that crop conditions allow for it, is a relatively low cost way to increase yield and profit from the crop 1,2,3,4,5,6.

In general, seeding could be considered early from late April to mid-May, but this varies by region. In the southern Prairies, early seeding usually allows the crop to utilize winter and early spring moisture more effectively and may help the crop avoid the highest summer temperatures during flowering. Early season moisture from snow melt can be critical to facilitate the shallow seed placement required for maximum emergence and good seedling establishment and growth. Missing this early season moisture forces the crop to rely more heavily on subsequent rains throughout the season.

Optimum canola seeding dates in Ontario are usually in late April to early May, which is slightly earlier than western Canada. Significant yield reductions occur if seeding is delayed after mid-May, mostly because the crop is flowering during the hot and frequently dry weather in late June and July.

Early seeding increases the risk of stand loss due to lethal spring frosts, but canola seedlings that are slow growing and have hardened off can withstand some early season frost. Early seeding can decrease the risk of yield and quality loss due to fall frost damage. Seeding early may actually reduce the overall frost risk, since spring stands severely damaged by frost still have ample time to recover or to be reseeded.

If soil temperatures are cold during seeding, then other seeding practices (use of treated seed, pedigreed seed, optimizing seed-soil contact, seeding depth and rate at seeding and utilizing proper fertilizer placement) become even more important.

Keep in mind that canola emerges more slowly in cold soils, which means protection provided by seed treatments can decline before the crop has outgrown its most susceptible phase. With early-seeded canola it can be especially important to scout for flea beetles and to be prepared to apply an insecticide if needed. Slow growing canola crops will also be more vulnerable at the seedling stage to weed competition. Earlier control of weeds may be necessary, especially for perennials and winter annuals that are better adapted for growing under cold conditions, and hence more able to compete with the crop under those conditions.

Seeding date is often dictated by factors outside the grower’s control, such as:

There is more to seeding date selection than just current soil temperatures. Soils may be warm and workable in late March or early April in some regions and years, only to face a month-long cold snap and a foot of snow. Before seeding, consider the probability of severe or sustained cold weather after seeding.

However, if soil temperatures are only one degree Celsius in early May and weather is predicted to stay cool, some growers may decide to seed anyway because good seeding days can be rare some years, and by early May warm temperatures are expected. Other growers will hold out for warmer soils, knowing canola will emerge more rapidly and vigorously. However, by mid-May or later, growers may need to take advantage of good field conditions to get canola in the ground regardless of soil temperature. By that time chances are good that soil temperatures will warm up following planting, even if they are cold at the time of seeding. The greatest yield penalties from planting late have typically resulted from seeding in last week of May or early June.

Seeding in late April is fairly common in the Brown and Dark Brown soil zones, and has been tried in Black and Grey Wooded zones. Canola seeded at this time faces higher risks from early insect infestations, seedling disease pressures, water ponding, soil crusting, frost damage, and slow emergence due to cold soil. But under the right conditions, seeding in late April can provide an added yield benefit over May seeding 8.
April-seeded canola is likely to have higher seedling mortality but the plants that survive should have more time to branch out and compensate for a thinner stand.

When seeding dates are drastically delayed (usually due to prolonged periods of unfavorable weather conditions), growers may consider broadcast seeding.

Table 2. Range of seeding and swathing dates at two locations

Canola seeded in early spring yields equal to or better than fall-seeded canola (spring type canola seed planted late enough in fall that cold soil prevents germination until the following spring) 9,10. With the high value of canola seed, growers are less inclined to take a risk on fall seeding when early spring seeding provides similar or superior yield potential. Fall seeding of canola in Western Canada is not a recommended practice.

Crop insurance for spring canola varieties seeded in the fall is available only after inspection in the spring. If the crop is established to the satisfaction of the provincial insurance provider, the crop can be insured as though it were a spring-seeded crop. Winterkill coverage is not available in Alberta, Saskatchewan or Manitoba.

Winter canola seeded in the fall is common practice among canola growers in southern Ontario, but the winter hardiness of these varieties is still inadequate for use on the Prairies. Fall seeding of spring varieties is risky, even in southern Ontario. Any warm temperatures after seeding may lead to premature germination of dormant seeded canola. Spring freeze and thaw cycles can also greatly reduce seed soundness and germination rates. Growers may want to increase the seeding rate (or maybe even double the rate) to attempt to compensate for the high risk seed environment.

If considering fall seeding (which is not a recommended practice in Western Canada):

Not all canola can be seeded the first weeks of May due to crop conditions or logistics of a large farm operation. With late May or early June seeding, the risk of fall frost halting maturity and reducing yield and quality rises, as does the risk of flower blast during the heat of summer. But canola seeded in late May or early June can still produce good quality and yields under favorable conditions.

Seeding Brassica rapaAlso referred to as Polish canola, it is the less commonly grown species of canola currently grown in Canada. More

Early-seeded canola tends to produce higher oil content and grade 5,11. Early seeding also leads to an earlier harvest, which reduces the risk for higher chlorophyll content in the seed and oil.

Start with a look at the average date of first fall frost. This will indicate how much growing season (on average) is left. Alberta Saskatchewan Manitoba maps show average dates for first fall frost. Alberta frost probabilities are available for each station on Alberta’s AgroClimatic Information Service (ACIS). Most fall frosts occur within two weeks on either side of the average date for each area. For example, if the first fall frost is between August 31 and September 6, on average, then a varietyA variety is a variant of a species that evolved in nature without the intervention of humans, e.g. Brassica oleracea variety (in short form, var.) botrytis (cauliflower), var. capitata (cabbage), var. italica (broccoli), etc. More with 100 days to maturity should be seeded this week to be on the lower risk side for fall frost damage.

Growing degree days (GDD). GDDs are calculated by averaging daily maximum and daily minimum temperatures for each day, and subtracting the assumed minimum temperature (in this case base zero) required for growth to proceed. A day with a high of 20 degrees Celsius and a low of 10 degrees Celsius would contribute 15 GDDs on a scale with base of zero.

Seed shallow. This is especially important later in the spring.

Consider the profit potential of other crops. Yield potential for all crops drops with late seeding. For example, calculate if a lower yielding canola crop would provide a better return than a lower yielding wheat or barley crop.

Late seeding tips
Growers hoping to seed their final canola acres this week or next week may want to consider the following tips to deal with a shortened growing season. Start with a…
Pros and cons of early seeding
If you have perfect seeding conditions in late April, should you seed canola? Early seeding usually improves canola yield potential and quality, but these benefits depend on survival of a…
Seeding Well Underway
Seeding operations progressed late last week and over the weekend. Where conditions are wet, acres are being seeded on a field by field basis. Seeding in the wetter areas is…
Seeding between the lines: evaluating the potential of inter-row seeding for canola in southern Alberta
Treatment means for the canola inter-row seeding Highly accurate GPS guidance and automated steering have given producers the ability to seed between the stubble rows from previous crops. This practice…