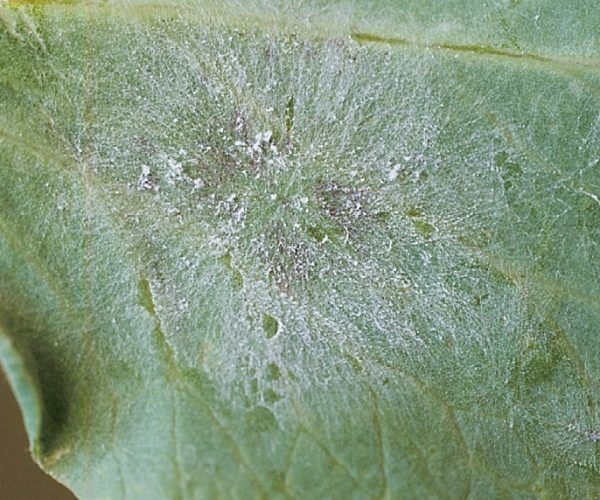 Powdery mildew in canola is caused by the fungus Erysiphe cruciferarum. It causes powdery, white fungal growth on canola leaves, stem and pods and is best noticed at swathing timing, when white clouds of dust are released.

Powdery mildew on canola is caused by the fungus Erysiphe cruciferarum.

The pathogenA disease-causing organism (such as a fungus or bacteria). overwinters as cleistothecia (small, black spheres) which germinate in spring to produce sexual ascosporesMicroscopic asexual spores that typcially become airborne.. Asexual spores (conidiaSingle-cell spores or fungal propagules (such as those Verticillium species form).) are produced on infected plants and can be wind-blown to new fields.

The disease cycle begins when ascosporesMicroscopic asexual spores that typcially become airborne. or conidiaSingle-cell spores or fungal propagules (such as those Verticillium species form). land on the upper surfaces of leaves, or on stems, and the temperature is between 20 to 27 degrees Celsius and the relative humidity is between 50 and 95 per cent.

The fungus penetrates leaves, grows inside epidermal cells, takes nutrition from the plant and sporulates.

Resulting plant symptoms are first observed on the under-side of older leaves. Later, white spots appear on upper and lower leaf surfaces, stems and/or pods, and may expand to cover the entire surface of the host tissues.

The pathogenA disease-causing organism (such as a fungus or bacteria). has a polycyclic life cycle where a single infection site can quickly produce condia that infect and cover all nearby leaves, stems and pods with symptoms.

Infected leaves may wither and die. The loss of photosynthetic area is the main cause of yield loss 1.

Symptoms include dusty, or powdery, white fungal growth on canola leaves, stem and pods. Powdery mildew infections have been discovered at swathing timing when white clouds of dust are released and equipment can become coated with the white powder 1.

Powdery mildew is not considered a serious problem in Canadian canola since the disease is fairly uncommon and most infections occur too late in the season to cause significant yield loss.

At this time there are no products registered for control of powdery mildew in Canadian canola 3.

White rust (staghead)
White rust is a canola disease caused by the pathogenA disease-causing organism (such as a fungus or bacteria). Albugo candida that affects mainly Brassica rapaAlso referred to as Polish canola, it is the less commonly grown species of canola currently grown in Canada. and B. junceaAlso referred to as brown mustard, it is a minor…
Canola Watch quiz
If you have trouble with the embedded quiz on your device, click here. Create your free online surveys with SurveyMonkey , the world’s leading questionnaire tool. Answer: Blackleg is on the left. Downy mildew is on the right. Blackleg lesions have tiny black spots called picnidia. Downy mildew lesions will have white powdery growth on…
How to use photos for agronomy
Crop diagnostics often come down to good photography skills, especially since so many people have smart phones with cameras, and since agronomists cannot get to all fields in a timely manner. The rules to agronomy by phone and photograph are: 1. Keep an open mind. Don’t have a pre-conceived notion of what the problem is,…
Sclerotinia stem rot timeline for infection
The sclerotinia stem rot infection cycle begins with the little black sclerotiaHard, black resting bodies made of compact masses of hyphae; the plural term for sclerotium left soil the last time an infected crop was produced on that field. With warm soils and a couple of 10-15mm rains, sclerotiaHard, black resting bodies made of compact…