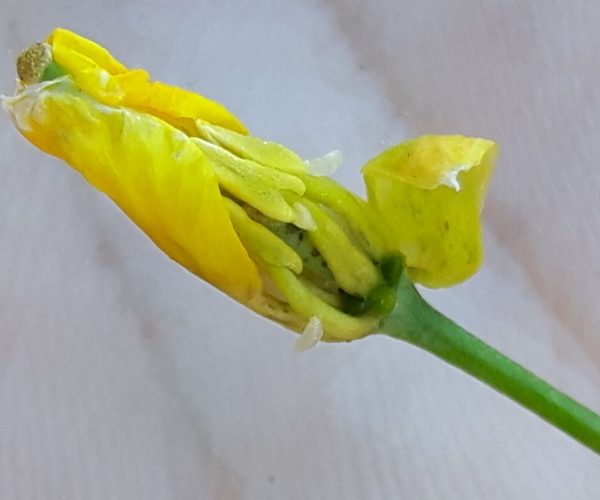 The canola flower midge is a pest insect recently discovered in Western Canada. It looks very similar to the swede midge from the same genus (Contarinia). Only the larval stage causes damage to canola by feeding within unopened canola flowers which grow to form “bottle-shaped” galls instead of fully developing. Both the larvae and adult midges are very tiny, so looking for the damage caused by the larvae is the quickest way to find these insects. Further research and monitoring will be useful to develop more management recommendations and to potentially determine economic thresholds.

Canola flower midge (Contarinia brassicola) is a tiny gall midge officially identified in Western Canada for the first time in 2016 4. The first Canadian confirmation of this pest resulted from poor pheromone trap capture in swede midge (Contarinia nasturtii) research conducted in Saskatchewan. When these same pheromone traps were deployed in Ontario, swede midge were attracted to the monitoring traps. Closer examination showed the prairie midge specimens had hairier wings, and differences in genitalia and antennae characteristics. These physical difference and DNA sequencing information led to the confirmation of a new Contarinia midge 5. In addition to Saskatchewan, survey have since been found this midge in Manitoba and Alberta as well, with some regions reporting relatively higher populations (ex. northeastern Saskatchewan) 2. Although originally believed to be an invasive species, current evidence suggests this midge may be native to the area.

Eggs of the canola flower midge are laid in flower clusters, so that after hatching, larvae will develop enclosed within flowers. Mature larvae drop to the soil surface to pupate in cocoons before emerging as tiny adult midge (flies). Canola flower midge are believed to complete at least two generations per year in Saskatchewan 4.

Host plants for this tiny fly include canola, some brassica vegetables and brassica weeds 2.

Two HymenopteraThe insect order (the scientific classification more broad than Family) which includes sawflies, wasps, bees, and ants. More parasitoids of the canola flower midge have been identified with parasitism rates between 0 to 62 per cent across sites and years 4.

Canola flower midge larvae are initially white in color changing to darker yellow as they feed and develop.  Larvae of this genus have a characteristic “spring” mechanism that allows them to jump an abnormally large distance. The larvae curl, and upon release can leap several centimeters. Identification of the tiny adult midges requires entomological training as many midge species appear similar.

The larval stage is the only stage that causes damage to canola.

Canola flower midge larvae aggressively feed within individual canola flowers and prevent these flowers from further development. The larvae secrete salivary fluids into the flower, which break down the cell walls and allow the larvae to suck up the nutrients released by the digested cells. This feeding can leave behind brown scarring, and distorts the flower shape. Therefore galled (unopened) flowers have been reported as damage symptoms on canola plants. As well, black, necroticA symptom of plant cell or plant tissue death. More feeding scars can be found on the style of the flower 4. Affected flowers remain unopened with flower petals fused together, often in a bottle shape. Fused flowers may darken briefly with a light orange discoloration, later drying on the plant. The style may also protrude from the galled flower material as the base of the flower.

Although very rare and not fully understood, there were reports in 2020 of midge (which were later identified as canola flower midge) larvae found within pods in an Alberta field. Investigation into several 2021 field detections in both Alberta and Saskatchewan will may provide provide more clarity on this occurrence (and the biology of this insect to allow for larvae to be found in this location on the plant) 6.

Research into developing pheromone trapping for this new species is in progress. The economic impact of the species is also being investigated, as two Prairie fields in 2019 may have had significant economic damage caused by canola flower midge 7.

Check out the current Assessing the impact of Contarinia sp. on canola production across the Prairies research project in progress on this insect.

Monitoring the canola flower midge with pheromone-baited traps
Background The canola flower midge, Contarinia brassicola, is a recently discovered insect pest of canola on the Prairies. Damage results when larvae feed on developing flower buds which prevents the…
New midge in canola
Distorted canola growth thought to be from swede midge (Contarinia nasturtii) is likely caused by a separate midge species (Contarinia brassicola). Scientists were suspicious that two midge species were present…
Development of pest management decision-making protocols for the Swede midge in canola
PURPOSE: Swede midge is an invasive fly that has become one of the most important pest species for canola growers in Ontario, since its discovery in 2000. The first record of…
Assessing the impact of Contarinia sp. on canola production across the Prairies
In 2016, Boyd Mori and colleagues discovered a new species of canola midge, Contarinia brassicola Sinclair (Diptera: Cecidomyiidae), in Saskatchewan and Alberta. At the time, nothing was known about its…