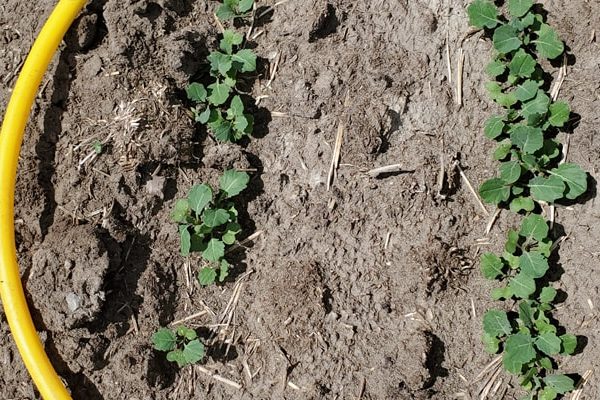 A key factor to good plant establishment is an adequate plant population. The target plant population will impact a grower’s strategies for seeding (e.g. seeding rate), as well as in-crop management (e.g. weed pressure) and even harvest strategies (due to maturity timing). The plant population of a crop will also impact the plant architecture, crop competitiveness and eventual quality and yield.

Canola is often called a flexible or plastic crop because individual plants can adjust the number and size of branches and pods they produce in response to available moisture, light and nutrients. Therefore, canola naturally compensates for variations in plant population over relatively wide ranges with very little effect on final yield 1,2.

As the canopy becomes more dense (plant population increases), each plant produces less dry weight, thinner stems, fewer branches and fewer seeds per plant due to increased competition from adjacent plants. However, fewer seeds per plant are offset by a higher number of plants, resulting in similar seed yield per unit area compared with lower plant populations. This is why canola can produce similar yields across plant populations ranging from 50 to 200 plants per square metre (approximately five to 20 plants per square foot).

A canopy with too few plants will not fully utilize the available light, moisture and soil nutrients 4 and it will be less likely to reach its full yield potential.

In a canopy with more than 200 plants per square metre (approximately 20 plants per square foot), stems are very thin and pods are concentrated at the top of the plants. These stands are more likely to lodge, which can create a better microenvironment for diseases (such as sclerotinia) to flourish, and can make harvest more challenging. Severe lodging during bolting or early flowering stages may also directly impede the efficient uptake of moisture and nutrients through stem crimping, leading to lower yields.

Moderate to high plant densities in early growth stages can also reduce the yield impact of damage due to insects, disease, frost and hail, because the stand can afford some plant mortality and still maintain its yield potential. Low plant densities can produce viable crops, but the management of thin stands is more challenging, due to more variable maturity and lower tolerance for additional plant losses.

Since canola plants in low population density situations grow larger and branch more, they tend to mature later. Secondary branches account for up to 80 per cent of the yield for canola crops with 20 plants per square metre (approximately two plants per square foot) 1,2.

The plants will also have a wider range of maturity, creating yield and quality losses simply due to inability to time applications that align with all the plants and harvest limitations. In these situations (with low plant populations and a wide maturity window) pods on the main stem may be dry with completely mature seeds while pods on secondary branches may still be green with watery seeds inside. Top pods may also start to shell out before pods on side branches are ready to swath, causing yield losses to occur no matter when a grower decides to swath this crop.
Extra branching in very thin stands (20 plants per square metre) can delay seed maturity up to 21 days depending on environmental conditions 3.

The recommendation is to target a population of 50 to 80 plants per square metre (approximately five to eight plants per square foot) to maintain maximum yield potential while providing some buffer for plant loss due to post-seeding stresses such as frost, seedling disease, wind or water, insects, weed competition or others. At a low plant population any additional plant mortality cannot be afforded without impacting yield potential.

Late-maturing crops are more likely to encounter a fall frost that can arrest the development of immature seed, causing shriveled seeds and higher chlorophyll levels and ultimately resulting in reduced grade or lost yield.

Plant population can even influence oil quality. Some studies have found that the highest oil content and lowest free fatty acid levels were found in plants grown with lower seeding rates. However, there are cases in which high seeding rates reduce maturity enough to avoid a fall frost, and produce lower green seed and chlorophyll content than plants grown in low seeding rates.

Take a plant stand count
While scouting for disease and insects, take time to assess the stand. If the stand is spotty and thin, be more conservative with thresholds when protecting the crop from…
Seed: Plant counts influence buying decisions
Get out there and count your canola stubble! Counting stubble density in the fall can help growers determine if their spring seeding rate was adequate to reach the crop’s yield…
How many canola plants are too many?
In one case this year, a grower seeded 2.2-gram thousand seed weight (TSW) canola seed at 5 lb./ac. With very good seed survival due to warm, moist soils, the crop…
Harvest plant stand counts: WHY and HOW
Count stubble density in the fall to determine if the final plant population was enough to reach the crop’s yield potential. Canola generally needs a minimum of four to five…