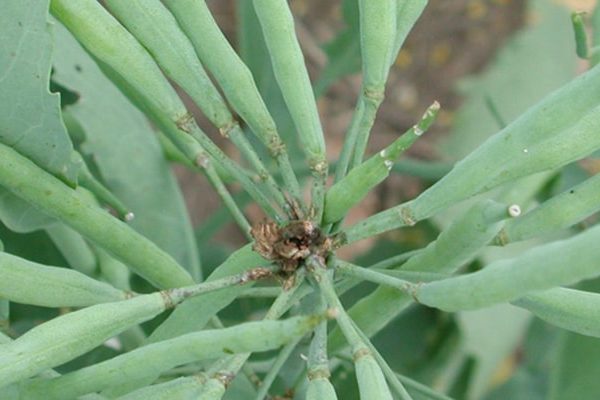 This insect pest causes damage to canola while in its larval stage. It has been found in Ontario and other locations in Eastern Canada, and has the potential to become a significant threat to canola in the Canadian Prairies, if it were to be introduced and establish. The swede midge can easily be confused with another small, closely-related (newly-discovered) midge, called the ‘canola flower midge’. For this reason, along with the tiny size of the insect, both proper identification of the insect and the damage it may cause are crucial, prior to considering any management options.

Swede midge, Contarinia nasturtii, is a tiny gall midge originating from Europe and Asia which has been found in Canada and has the potential to do serious harm to canola production. Host plants for this tiny fly include canola and mustard as well as cabbage, cauliflower, radish and a wide range of other crops and weeds from the family Brassicaceae. Swede midge populations have caused substantial damage in other areas of the world and have the potential to cause mild to severe damage in Canada’s canola production regions.

The first Canadian confirmation of this pest was in Southern Ontario in 2000. It heavily infested Ontario’s cruciferousPlants belonging to the family Brassicaceae or (previously referred to as) Cruciferae. More crops and caused yield losses up to 85 per cent in some areas. Since then, the insect has made its way into Quebec (2003), Nova Scotia and, more recently, P.E.I. It has also been reported in New York, Connecticut, Massachusetts, New Jersey and Vermont in the United States 1,2. Swede midge samples have been documented in Saskatchewan and Manitoba from 2007 and 2008, respectively. However all other Prairie reports since that time have been attributed to be a newly identified, closely related species, Contarinia brassicola, commonly called the ‘canola flower midge’.

Swede midge could potentially become established in any province under preferential conditions of high moisture and warm temperatures throughout the growing season. Unlike many non-native species, cold winter temperatures don’t appear to be a limiting factor 3.

Swede midge is a short-lived, multi-generational insect which isn’t limited to a single flush of emergence after overwintering. Overwintering adults emerge during May-June in at least two peaks, separated by one to two weeks. Each generation also contributes a small percentage of pupae to the overwintering population to guarantee survival into future years.

The number of generations varies with climate, with three to five generations per growing season in Ontario, overlapping in emergence so that all stages can be found at the same time. Depending upon conditions, the life cycle can range from approximately 20 to 80 days. Eggs can hatch within one to 10 days, the larval stage can last seven to 21 days and pupation can last 10 to 48 days.The last generation in the fall waits underground through the winter in a cocoon, emerging in the spring to start a new cycle.

The swede midge is a fairly weak flier but may be carried longer distances by the wind, and it is small enough to make detection difficult. Swede midge has further adaptations for unsuitable conditions. For example, the length of time in diapause (while overwintering) can vary from year to year. Swede midge will “wait” as pupae until there is sufficient soil moisture before emerging as adults. There are different shapes of cocoons for pupation and overwintering, with spherical ones being used for overwintering and ovoid ones used for pupation.

Swede midge larvae feed protected by surrounding plant tissues, and damage symptoms may take a week or more to develop. When scouting plants, a hand lens is recommended to detect larvae and early damage symptoms. Damage symptoms are easily mistaken for heat or cold stress, fertility issues, mechanical damage, herbicide damage, drought or other insect feeding. The insect itself can also be mistaken for other midges, so confirming the diagnosis with an entomologist is recommended.

Swede midge adults don’t directly cause any damage to crops as they only feed on the nectar of flowering plants. Females lay their eggs on the youngest parts of the plant (e.g. meristematic tissues), developing flower buds and in leaf axils. While flower buds are a potential target, females appear to prefer laying eggs on plants in the late vegetative to early bud stage. The larval stage is the only stage that causes damage to canola. Larvae feed at the growing points (apical meristem), which may kill the growing point and cause plants to produce compensatory branches. Conversely, if only the flowers are attacked, the plant is not a complete loss.

Larvae secrete salivary fluids onto the plant, which break down the cell walls and allow them to suck up the nutrients released by the digested cells. This feeding can leave behind brown scarring and cause the plant tissues to twist and swell, and potentially form a simple gall around them. The gall protects the larvae from predation or insecticide, allowing them to feed undisturbed.

Damage to pre-bolting plants can prevent the main raceme from even forming. The young shoots and leaves may become swollen, distorted and twisted. Damage to the terminal meristem after primary bud formation may prevent regular elongation of the raceme and cause a bouquet- or palm-tree-like appearance 6.

Death of the main growing point, which results in the lack of head formation in the cruciferousPlants belonging to the family Brassicaceae or (previously referred to as) Cruciferae. More vegetable crops, is referred to as “blindness” formation. Death of the apical meristem may also cause the production of secondary compensatory shoots. In Brassica vegetables, this can result in multiple small vegetable heads that are unmarketable.

The amount of insect pressure can impact the damage caused by swede midge. Moderate midge pressure may result in reduced or abnormal growth and under high midge pressure, growing points may completely fail to develop.

Environmental conditions can indirectly impact the amount of damage too, since losses are most significant under favorable conditions (warm, wet weather) when midge emerge early, have good survival and produce multiple generations.

Prior to considering any potential insecticide application, an accurate assessment of the population should be completed. Looking for damage can be a useful way to scout, but the use of pheromone traps is the best method to monitor the presence and population of the insect. These traps, which can be set up on each of the four sides of the field, attract only male swede midge adults if they are emerging from fields near the traps.

Checking every two weeks is adequate to determine the presence of the insect, but increased frequency (at least two to three times per week) is needed in preparation for any management or control. Pheromone lures should be replaced in traps every four weeks.

Insecticide application decisions should not be based only on the presence of swede midge damage alone, as it takes time for damage symptoms to develop. Larvae may have already left the plant before symptoms are detected. Timing applications at adult population peaks based on pheromone trap monitoring should help to increase efficacy, however appropriate pheromone action thresholds have not yet been established, so intensive monitoring and consultation are recommended to determine whether or not an insecticide application is needed. Under moderate to high populations, numerous (and therefore costly) insecticide applications timed according to pest emergence may be needed to protect yields 5. Always check provincial crop protection guides (from Ontario, Manitoba, Saskatchewan, Alberta, etc.) for a list of insecticides registered for swede midge control in canola and follow product labels when applying products.

For crop management, planting early can ensure your crop is past the most susceptible stages by the time the adult swede midge emerges. Maintaining proper fertility management always increases the plant’s potential to withstand a pest. If swede midge is found in a field, a minimum three-year crop rotation can help prevent populations from increasing rapidly. However, in areas with high amounts of canola in the landscape, swede midge can easily move from a previous field in which they overwintered to a new field the following year. Subsequent fields should be placed as far apart as possible from the previous year’s canola fields.

In the Prairies, if introduced successfully, swede midge population growth and range expansion would likely be limited in dry years. However in Ontario and eastwards, conditions are very suitable for population growth in most years.

Fortunately, midge parasitoids have recently been discovered in Saskatchewan, Quebec and Ontario, which may also help to curtail populations to some extent.

Ontario updates swede midge infosheet
Swede midge, native to Eurasia, was first found in North America on cruciferous vegetables (Brassicaceae) in Ontario in 2000. It first appeared in canola in Ontario in 2003. Extreme swede…
Development of pest management decision-making protocols for the Swede midge in canola
PURPOSE: Swede midge is an invasive fly that has become one of the most important pest species for canola growers in Ontario, since its discovery in 2000. The first record of…
Aster yellows and Swede midge – new threats to Prairie canola production
The objectives of this project were to determine the extent of infestation, evaluate yield losses, develop forecast warnings and identify resistant canola lines for two Prairie pests – aster yellows…
Enhanced modelling of swede midge population dynamics in North America
Effective pest management of the invasive swede midge, Contarinia nasturtii Kieffer, is hindered by the lack of development and mortality information in its invasive range. This project had three main…