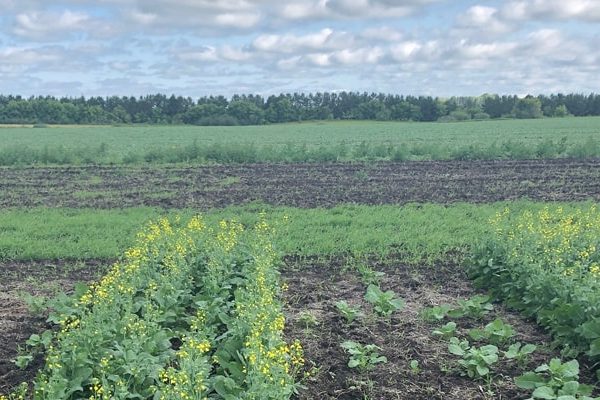 There are base and enhanced insecticide and fungicide seed treatments available, which can offer canola protection in its early growth stages.

To maximize efficacy of insecticide and fungicide seed treatments and promote rapid emergence, it is recommended to plant canola 1.25 to 2.5 centimeters (0.5 to 1 inches) deep into a warm moist seedbed using a seeding rate that targets 50 to 80 plants/m2 (5-8 plants/ft2). This will help the crop quickly grow through the early growth stages when it is most susceptible to seedling diseases and flea beetle damage.

There are many commercially available seed treatments for canola, which are listed in Table 1.

* LD50 values represent the relative toxicity of a pesticide. They represent the dose (in mg/kg body weight) that will kill 50% of the test animals. Thus the lower the number the greater the toxicity. Values given are for oral female rat LD50.

Fungicide (base and enhanced) seed treatments

Canola seed and seedlings are vulnerable to a broad range of pathogens. Fungicide seed treatments can protect canola from the most common seedling disease-causing fungi, including Rhizoctonia solani and various Fusarium and Pythium species. Without fungicide seed treatments, canola seedlings are at much higher risk of seed rots, seedling blight and damping off. Learn more about root rots.

Fungicide seed treatments can also protect canola from seed-borne forms of blackleg and alternaria. As well, they can prevent the seed from introducing the pathogens to a field — or at a minimum, from increasing the inoculum levels for these diseases.

New enhanced fungicide seed treatments have the capability to protect plants from blackleg infections caused by both seed-borne and airborne inoculum. Pydiflumetofen and Fluopyram are the actives that belong to the chemical class of the Succinate Dehydrogenase Inhibitors (SDHI) which have been found to provide early season blackleg control 1.

Insecticide seed treatments are widely used for canola in Canada. They can protect canola from flea beetles in the early growth stages depending on the insecticide active ingredient, rate and environmental conditions. Seed treatment is an effective way to provide protection because flea beetles are widespread across the Prairies and canola seedlings are vulnerable to feeding damage. High flea beetle populations can wipe out a crop quickly, sometimes even before a grower can respond with a foliar treatment. Seed treatments mitigate the risks associated with relying solely on foliar control, namely timing, coverage, and weather conditions such as rain or wind.

Agriculture and Agri-Food CanadaAgriculture and Agri-Food Canada is a department of the Government of Canada. More research found that insecticide seed treatments reduced flea beetle damage between nine and 90 per cent, depending on the product and the rate, when compared to untreated checks. By reducing damage, seed treatments improved seedling establishment from 61-64 per cent to 81-83 per cent, and yield by six to 27 per cent 2.

Only in specific instances can the use of prophylactic applications of insecticide be justified. These include: when rescue treatments cannot keep pests under the economic injury level, when target pests have a high probability of causing economic damage and when pests are widespread in their distribution and there is no practical or quantifiable way of determining where and when they will appear. In addition, it may be justified if alternative control treatments are less efficacious and introduce a greater economic burden which includes crop loss, increased costs, and negative impacts on non-target organisms 4.

Since canola plant establishment is so important and because canola seed is so valuable, fungicide and insecticide seed treatments are economical ways to provide the protection young canola seedlings need to survive 5.

In order to maximize seed treatment effectiveness, seed canola into warm soils (five degrees Celsius or higher) and to proper depth (approximately two centimetres) to ensure rapid emergence. Delayed emergence due to deep seeding or cool soil temperature prolongs the time required for the crop to grow beyond the vulnerable early seedling stage. If a crop germinates but stays below ground for 14 days or more before emerging, the likelihood that seed treatment protection will run out before the crop advances beyond the four-leaf stage is greatly increased. Deep seeding also exposes the hypocotyls to more soil, increasing potential exposure to seedling disease fungi.

Canola with fungicide and insecticide seed treatments show a consistent benefit for canola plant establishment and yield when compared to fungicide-only seed treatments and to untreated seed 6. This project also illustrated that a mix of treated and untreated seed could provide the same economic benefit, while reducing the pesticide load per acre. A mix of 2/3 treated and 1/3 non-treated provided the same economic return as 100 per cent insecticide treated seed.
Seed treatments that provide the longest flea beetle protection usually provide the best seedling establishment, highest plant weight and highest seed yield. Differences among seed treatments were greater when flea beetle infestations were high than when infestations were low 5.

Currently all available canola hybrid seed is sold pre-treated (with a seed treatment). Seed treatment options in canola are almost exclusively registered for commercial treatment with a closed transfer system. A few varieties can be legally saved for a grower’s own use, but the grower would have to first check that they aren’t violating any legal obligations. Also, in addition to the insect and disease risks from planting untreated seed, research has demonstrated yield and economic advantages and agronomic disadvantages of growing farm-saved seed from hybrids rather than purchased hybrids 7. Therefore, planting certified treated seed is highly recommended.

Some seed treatments provide a mix of starter liquid fertilizer, often including phosphorus and micronutrients such as zinc or boron. Before making a significant investment in these products, test them for efficacy on limited acres on your own farm over a couple of years. Questions about conducting on-farm trials can be directed to the CCC Agronomy Specialist nearest you.

Many fertilizer products are registered, but the Canadian Food Inspection Agency (CFIA) rules for fertilizer products, including inoculants and enhancers, are not as strict as they are for pesticidesPesticides (herbicides, insecticides or fungicides) used to protect against or reduce the amount of damage caused by weeds, pest insects or plant diseases. More. Controlled release coatings, urease inhibitors and inoculant extenders, for example, do not fall under the regulatory authority of the Fertilizers Act. But when mixed with a fertilizer, the end product is regulated. The CFIA’s Crop Inputs Division encourages manufacturers of these products to seek a Letter of No Objection (LONO) from the CFIA to ensure that their use in fertilizers and supplements results in final products that meet safety and labelling standards. However, growers should note that any enhancers, extenders or seed-applied fertilizer products put into a custom fertilizer blend do not need to be registered, so they may have come into the marketplace without going through CFIA regulatory channels, and no longer need to provide proof of efficacy to be registered. For more information, see CFIA’s registered product list.

Most drill tanks sold in western Canada are made to handle small seeds such as canola and deliver relatively uniform seed counts to each row. For a drill that cannot accurately meter small seeds and low flow rates, bulking agents such as safe seed-placed rates of material like phosphate fertilizer (11-52-0-0) may help.

The Canola Council of Canada trials in 2001 and 2002 (evaluating pelletized elemental sulphur at 22.5 kilograms per hectare, or 20 pounds per acre, as a seed-bulking agent) found no consistent stand establishment or yield benefit when using the bulking agent, indicating this practice is beneficial for ease of calibration more than providing direct economic gain.
Elemental sulphur will improve sulphur availability in following years, though. Bulking agents can also help when checking seed placement and drill performance. For example, the yellow sulphur prill should be found on the same plane as canola seeds.

Slow emergence and seed treatments
Slow canola emergence due to cool soils can increase the risks from seedling diseases and from flea beetles. Seedling disease risk. Slow plant development increases the risk from seedling diseases.…
Seed treatment upgrades diversify insect protection
Part of the canola variety decision is the seed treatment decision. Seed treatments are an important part of canola stand establishment, and many in-season insecticide applications are avoided from the…
Strategies for managing flea beetle populations in canola
The project consisted of activities to control flea beetles in canola while reducing insecticide levels in the process. The main investigation, conducted at Brandon and Saskatoon, examined the effects of…
Rescue treatments unproven for hail remedy
Canola hit with light to moderate hail at up to 20% flower may recover with only minimal to moderate yield loss. Plants will flower longer and compensate. If applying crop…