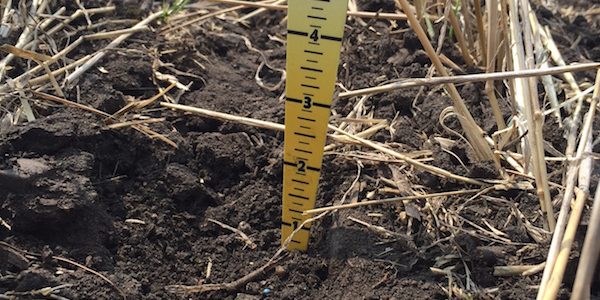 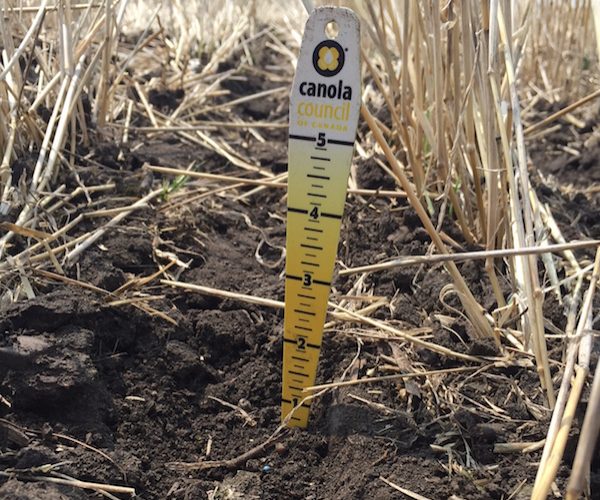 Canola seed placed in the soil at a depth of 1.25 centimetres to 2.5 centimetres (half an inch to one inch) can improve seed survival, plant density and weed competition when compared to seed placed at depths less than or greater than that target. Rapid emergence that results from ideal seed depth can also decrease days to flowering and maturity, which can reduce green seed risk at harvest.

An Agriculture and Agri-Food CanadaAgriculture and Agri-Food Canada is a department of the Government of Canada. More study compared canola seeding depths of one and four centimetres. It concluded that, under moist conditions, average canola emergence improved from 37 per cent at four cm seed depth to 62 per cent at one centimetres. The study also concluded that canola seed placed at one cm emerged faster and had decreased days to flowering and days to maturity. Deeply sown seeds require several days longer to emerge and have reduced survival rates due to the insufficient stored energy in canola required to push cotyledons to the surface1.

Uniform seed depth is also important as this will help canola plants to emerge at about the same time. Uniform placement often comes down to the seeding tool. Proper set up of the seeding tool is described in the Equipment Management section of the Plant Establishment chapter.

Seed depth in dry soil. In fields where the top 2.5 centimetres is too dry to allow for uniform germination and emergence, a slight increase in seed depth to hit moisture can speed up seed germination and crop establishment. Seeding as deep as four centimetres (one and half inches) to put seed on or in moisture might improve emergence if soils are also warm and there’s no rain in the immediate forecast. If considering deeper seeding, spend extra time checking placement both across the drill and in several adjacent rows to make sure that all openers are seeding at the intended depth.

Seed depth assessment
Seeding too deep is a common stand establishment issue in canola. This becomes clear as plants emerge, especially when some rows emerge earlier and more vigorously than others. Recently emerged…
How to check seed depth
Step 1. Start 100 feet or more behind where you stopped the seeder or walk over to the previously seeded pass. You want to check seed depth where the drill…
Prep the seeder for uniform seed depth
Canola seed placed at a consistent depth across the width of the seeding tool will improve seed-to-soil contact, increase seed survival and help the crop emerge evenly. The goal is…
Seeding depth. How far to chase moisture?
The same wind that makes it a challenge to spray also dries out the top layer of soil. Should this dry layer of topsoil mean a change in seeding depth?…