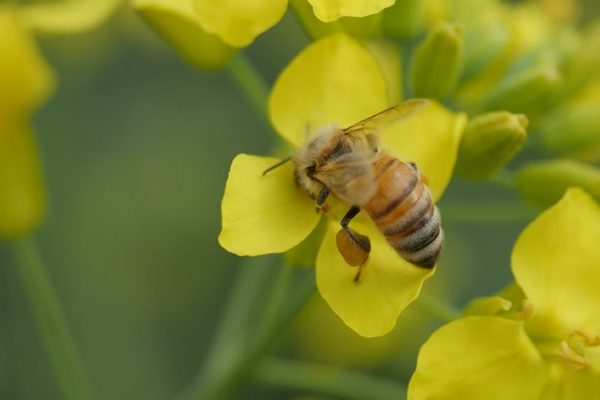 Beneficial insects provide valuable contributions to canola production, both in terms of pollination of crops and predation or parasitism of insect pests. Most of the thousands of insects found in canola fields are either beneficial or nonthreatening. Observing economic thresholds for pest management and protecting pollinators and parasitoids while spraying canola fields is vitally important. Accurately identifying beneficial insects (in addition to the pest insects they may be feeding on) as well as maintaining undisturbed habitat for them to maintain healthy populations are management strategies to utilize in optimizing canola production.

Natural enemies of pest insects provide an important service to farmers in the form of biological control – a key component of an integrated pest management system. Relatively few insect species actually classify as a pest and many are beneficial.

Honey and leaf-cutter bees also provide a valuable service in the production of hybrid canola. In addition, approximately 80 per cent of Canada’s honey crop is from canola 1.

Natural enemies of pests include predators and parasitoids that feed on pests from within or attached to their skin.

Some key predatory insects that may be found in and around canola fields include:

Many of the parasitoids that could be found in and around canola fields include:

These beneficial insects help to control pest insects during non-outbreak situations when the pest infestation is below economic thresholdAn economic threshold is the level of infestation (ex. pest insect density) at which lost yield (ex. due to feeding/insect pest damage) exceeds the cost of the chemical and its application. More. These insects serve a positive role in the production of canola. A healthy population of these insects is good for canola health and yield. While insecticides are valuable in controlling pest insect outbreaks, they are toxic to natural enemies. Insecticides should always be used judiciously and economic thresholds should be observed to help mitigate their impact on beneficial insects.

When scouting fields with sweep nets it is common to find beneficial insects such as:

Biocontrol utilizes non-insecticidal approaches to control insect pests. Classical biocontrol is the most common approach, where the natural enemies of an alien pest are imported from its native range to suppress the pest below economic levels. In Canada, at least 50 insects, including some agricultural pests, have been targeted from 1981 to 2000 using mostly the classical approach 2.

Conservation biocontrol works to maintain or improve the effectiveness of native beneficial insects. This natural control of insect pests probably has the most economic impact by keeping many pest insects from reaching pest status. This approach is the one most readily available to growers and the one that they can influence significantly through agronomic practices, since all agroecosystems can harbour a healthy population of beneficial insects 3.

Aleochara bilineata (Coleoptera: Staphylinidae) is an important natural enemy of root maggots and has been studied in western Canada. In general, greater root maggot incidence and damage, and greater population density of A. bilineata, occur in conventional tillage compared to zero tillage. Relatively greater parasitism of root maggot pupariaCocoons that overwinter in the soil (such as those which are used by root maggots). More by A. bilineata occurs in plots in zero tillage than in conventional tillage. No consistent effects are observed on A. bilineata activity in relation to seeding rate and row spacing 4.

To enhance A. bilineata parasitism, in the context of integrated crop management in canola cropping systems, canola growers should utilize zero tillage in conjunction with adopting the currently recommended seeding rates of between 5.6 to 9.0 kilogram per hectare (five to eight pounds per acre) and row spacing of 30 centimetres (12 inches) because this can bring advantages in terms of improved management of root maggots and other important canola pests like flea beetles and weeds

Beekeeping is a major industry in the canola growing areas of Canada. Caution must be taken to avoid killing bees or beneficial insects with insecticides. Although it may be difficult to protect native pollinating insects, honeybee kill can be minimized through co-operation with beekeepers. Keep the following information in mind when spraying canola fields to maximize pollination benefits to your canola and ensure continued good working relationships with commercial beekeepers:

How to preserve and enhance beneficial insects

Economical thresholds: Only spray insecticides when the pests have clearly surpassed the economic thresholds.

Trap crops/strips: Provide the opportunity to lure the pest to a local area where targeted insecticide applications can be made. For example, cabbage seedpod weevil can be lured to earlier flowering strips of canola where it can be sprayed in an area of less than 10 per cent of the field, thereby, sparing the rest of the beneficials 6.

Reduced tillage: This can increase populations of some ground beetles and spiders and also reduces the mortality of many parasitoids that overwinter as pupae such as the Peristenus wasps that attack lygus bugs.

Tall stubble: Leaving taller standing stubble by using a stripper header has been shown to increase the overwintering survivorship of parasitoids in other crops (e.g. Bracon cephi, the parasitoid of wheat stem sawfly) 7.

Intercropping: Intercropping adds vegetation diversity, which has been shown to increase populations of some natural enemies and reduce pest problems 8. Incorporating perennial forage crops such as alfalfa, which offer a stable habitat with a high diversity of insect hosts may increase the overall populations of beneficials in an area.

There are over 450 species of lady beetles (also commonly called ladybugs or ladybird beetles) in North America. Most lady beetles are beneficial as both adults and larvae, primarily feeding on aphids, mites, small insects and insect eggs.

Adult lady beetles have the familiar red or orange back with black markings or spots. Some lady beetles can be black and often with red markings. The adults are small, round to oval, and dome-shaped. The color and markings can vary between species.

Lady beetle larvae are dark and alligator-like with three pairs of prominent legs.

Depending on the species and availability of prey, larvae grow from less than one millimetre (1/25 of an inch) to about one centimetre (3/8 of an inch) in length, typically through four larval instars, over a 20 to 30 day period. Large larvae may travel up to 12 metres (about 40 feet) in search of prey. The larvae of many species are gray or black with yellow or orange bands or spots 11.

Lady beetle adults may be commonly caught in sweep nets, especially in fields with aphid populations. Early season adults may be seen on aphid infested shrubs or perennials.

Lady beetles eat voraciously, and need to eat many aphids per day to produce and lay eggs. Some species may eat their weight in aphids each day as a larva, and can consume upwards of 200 to 300 aphids per day. Once aphid populations fall, the lady beetle will fly in search of additional food.

Lady beetle adults and larvae may feed on the eggs of moths and beetles, and mites, thrips, and other small insects, as well as pollen and nectar when aphids are scarce. This ability to survive on a wide range of prey makes them a valuable beneficial insect.

Tolerance to insecticides is variable among lady beetle species. Good application practices to minimize the impact on lady beetles are important. Only spray when pest populations indicate application will save enough yield to be economical.

Lady beetles overwinter as adults under protected areas such as leaf litter, hedgerows and field debris. In the spring, the adults disperse in search of prey and egg laying sites. Female lady beetles may lay from 20 to more than 1,000 eggs over a one to three month period, commencing in spring or early summer. Eggs are usually deposited near prey such as aphids, often in small clusters in protected sites on leaves and stems. The eggs of many lady beetle species are small (about one millimetre or 1/25 of an inch), cream, yellow, or orange-coloured, and spindle-shaped 11 .

The last larval instarA developmental stage within one life stage (ex. of an insect) More remains relatively inactive before attaching itself by the abdomen to a leaf or other surface to pupate. Pupae may be dark or yellow-orange. The pupal stage may last from three to 12 days depending on the temperature and species. The adults emerge, mate, and search for prey or prepare for hibernation, depending on the availability of prey and time of year. Adults may live for a few months to over a year. The more common species typically have one to two generations per year 11.

There are nearly 400 species of carabid beetles (commonly called ground beetles) in Canada. Most are beneficial, and are voracious general predators of nearly all insect pests, including cutworms, diamondback moths, mites, small insects and insect eggs. Additionally, several are weed seed consumers. Adult carabid beetles have been observed consuming four to five cutworms in a 24-hour period, but in fields are frequently not this adept at locating them 12.

Although the Carabidae family is widely diverse in size and colouration, they share the same basic morphological features. Antenae are long, threadlike, and 11 segmented 12. Mandibles, or external jaws, are long, project away from the head, and are somewhat curved. The thorax is usually wider than the head, but narrower than the abdomen which is prominent and covered by the elytra, or hardened forewing.

The larvae are long and slender, bearing three pairs of legs on the thorax and a 10-segmented abdomen. The mandibles project forward.

Sampling for carabid beetles can be performed actively, by turning over rocks, stones, and coil clods where beetles typically shelter during daylight hours. Additionally, “spot and stalk” methods may be utilized whereby exposed beetles are procured by hand, with nets, or with pails. However, passive pitfall trapping is likely to yield the greatest numbers and diversity. This method involves burying a cup or dedicated pitfall trap to soil level, and leaving it for a period of days to catch beetles as they move about. Larger beetles tend to move farther and faster than smaller species, so pitfall trapping tends to over-represent these species 12.

Most carabid species in Canada have one defined breeding period within the year, and development from egg to adult will take at least one year, with larval forms frequently taking several years to reach adulthood. Some species overwinter as larvae, but most overwintering occurs as adults, buried in soil, undisturbed residues, or field margins. Many species can survive multiple years, if habitat and food supplies are adequate.

Surveillance Networks for Beneficial Insects II: quantifying the canola yield effect of wetlands, shelterbelts and other insect reservoir habitats
Purpose This project examines the relationship between the diversity and abundance of beneficial insects and canola production in Western Canada. Specifically, it addresses the role of natural habitats near canola…
Improved integrated crop management with beneficial insects (part 1)
Producers are encouraged to carefully monitor pest and natural enemy populations to make sure insecticide applications are necessary. That’s because, as this study shows, parasitism of diamondback moth larvae and…
Surveillance networks for beneficial insects: can natural habitats serve as insect reservoirs, and do they contribute to canola yield?
Overview Natural habitats and uncultivated areas (“non-crop areas”) within or near fields may harbour reservoirs of beneficial arthropods that provide services such as pest control and pollination to canola crops.…
Improved integrated crop management with beneficial insects (part 2)
PURPOSE: To determine the extent of the newly discovered host-parasitoid associations of the diamondback moth and D. insulare on the Prairies. This will include surveying, conducting genetic analysis and investigating sources of annual…