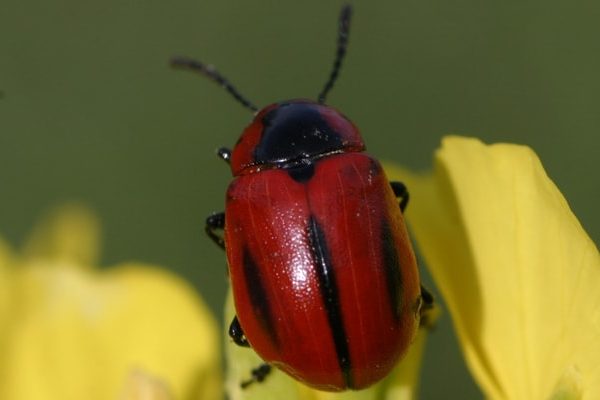 Both the adult and the larval stages of the red turnip beetle will feed on canola and other Brassica plants, however this occasional insect pest rarely causes economic damage. These insects move, sometimes considerable distances, into canola fields from other fields that grew canola the previous year. The beetles move slowly, but can completely devour canola plants as they move from the field’s edge toward the centre, making damage obvious from a distance.

The red turnip beetle, Entomoscelis americana Brown, is native to North America and can occasionally become pests of canola and mustard across western Canada.

It overwinters in the soil as reddish-brown oval eggs. The eggs hatch in early May and the larvae (grubs) feed only on the foliage of cruciferousPlants belonging to the family Brassicaceae or (previously referred to as) Cruciferae. More plants, such as canola (including volunteer canola), flixweed, shepherd’s purse. Mature larvae are black, about one centimetre (0.4 of an inch) long, with a rough-skinned, segmented body. After feeding, they enter the soil to form bright orange pupae in which they will transform into adult beetles 1.

The adult beetles appear from early June until early July and are seven millimetres (0.3 of an inch) long with bright red and black patches on their heads and three distinct black stripes running down their backs. After feeding into mid July, the adults burrow into the soil, rest for the summer and then leave the soil in late July or early August to mate and lay eggs. The beetles are often found in groups scattered throughout canola fields, mating near the tops of maturing plants. After mating, the adults do not migrate to the fringes of the field, but lay eggs randomly throughout the field. There is only one generation per year.

The larvae and adult beetles both feed on canola, but the newly-emerged adults are most damaging to the establishing crop in early June. The beetles do not fly in spring. Damage occurs when beetles move into a canola field from a neighbouring field sown to canola the previous year. Unless canola is planted on canola, the beetles remaining in the previous year’s canola field will feed on volunteer canola and cruciferousPlants belonging to the family Brassicaceae or (previously referred to as) Cruciferae. More weeds until the food supply is exhausted or the field is cultivated, forcing migration in search of food.

The beetles can move considerable distances to reach a canola or mustard crop. They may move through a cereal crop, feeding on the cruciferousPlants belonging to the family Brassicaceae or (previously referred to as) Cruciferae. More weeds and volunteer canola as they go. The beetles move slowly, completely devouring canola plants as they move toward the centre from the field’s edge, making the damage obvious as headland defoliation from a distance. Adults will re-appear in late summer but rarely, if ever, cause damage late in the season 2. Significant damage from the red turnip beetle has been rare. It is usually a minor local concern in northern portions of the Prairies. In 2017 several growers reported concerns with field margin damage in the black soil zone of central Alberta and Saskatchewan.

Scout canola fields frequently for defoliation and determine the cause.

No economic thresholdAn economic threshold is the level of infestation (ex. pest insect density) at which lost yield (ex. due to feeding/insect pest damage) exceeds the cost of the chemical and its application. More has been developed for red turnip beetle.

Rotating canola with other crops that aren’t hosts to this insect can be helpful 1. Although it should be weighed against the potential disadvantages, growers can cultivate fields with red turnip beetles in late fall to early spring to bury eggs and reduce larval survival. Beetles have been shown to cause severe damage in canola fields that neighbour fields where canola was under seeded the previous year to fescue and, therefore, not cultivated. Early spring cultivation removes cruciferousPlants belonging to the family Brassicaceae or (previously referred to as) Cruciferae. More weeds and volunteer canola, destroying the food supply for the larvae.

Check with insecticide suppliers if a registered product is available for red turnip beetle control in canola. Since the red turnip beetles move en masse, one or two passes with the sprayer along the field margin, over and in front of the invading insects, will provide control. Note that if an application for flea beetles or cutworms is required, red turnip beetles may also be controlled by these insecticides.

Red turnip beetle: Rare threat
Red turnip beetles eat plants from the brassica family only, and they are sometimes — though rarely — an economic pest in canola. They move into a canola field from…
Red insects: Turnip beetle and some Lygaeidae
Red turnip beetles are eating large patches in a few fields in central Alberta. (See the photos below.) Red turnip beetles eat plants from the brassica family only, and they…
Integrated approaches for flea beetle control II: Incorporating the impacts of plant density, ground predators, and landscape-scale predictive models in the management of flea beetles in the Canadian Prairies
Purpose:  Flea beetles are one of the major pests of canola in Western Canada. Canola growers need strategies to improve the efficiency of seed treatments, and flea beetle management in…
Insects: Diamondback moth, cutworms, flea beetle and more
Diamondback moth. Larvae have been found feeding on young canola plants, but to date these cases are few and far between. First instar diamondback moth larvae are leaf miners, feeding…