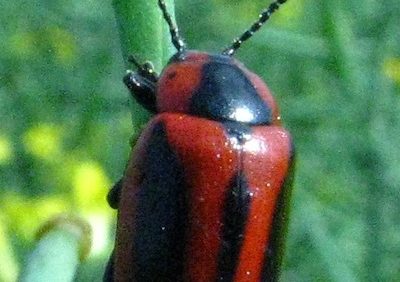 Red turnip beetles eat plants from the brassica family only, and they are sometimes — though rarely — an economic pest in canola.

They move into a canola field from fields sown to canola the previous year and, if necessary, can travel considerable distances to reach a canola crop.

The pest is not a common economic threat, but we know of higher numbers in a small area of central Alberta this year. Red turnip beetles move slowly, completely devouring canola plants as they move toward the centre from the field’s edge. This makes the damage obvious from a distance and also means damage tends to be in a small area. Targeted sprays are often enough, especially if damage is noticed early.

Red insects: Turnip beetle and some Lygaeidae
Red turnip beetles are eating large patches in a few fields in central Alberta. (See the photos below.) Red turnip beetles eat plants from the brassica family only, and they are sometimes — though rarely — an economic pest in canola. They move into a canola field from fields sown to canola the previous year…
Red turnip beetle
Both the adult and the larval stages of the red turnip beetle will feed on canola and other Brassica plants, however this occasional insect pest rarely causes economic damage. These insects move, sometimes considerable distances, into canola fields from other fields that grew canola the previous year. The beetles move slowly, but can completely devour…
Insect update: Bertha armyworms and more
Insect pressure is low, for the most part. Localized outbreaks could be found, so scouting is still important, but no insect is causing any major damage at this time. Bertha armyworm. Adult trapping ends this week. These traps have identified a few areas that could be higher risk for larval feeding. Cumulative counts that exceed…
Insect update: Beneficials, CSPW, root maggots
Beneficials. Lygus, bertha armyworm and diamondback moth have a number of natural enemies that will keep populations in check. These beneficial insects may not control an immediate pest threat that has already exceeded thresholds — growers will still have to spray in that case — but beneficials can keep a lid on populations. The key…