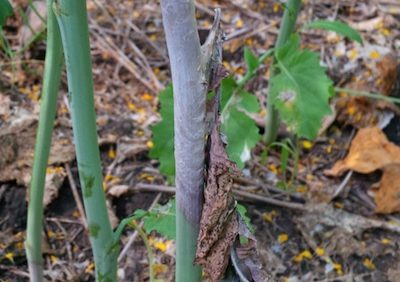 Lots of clubroot. Clubroot intensity is rising in areas where the disease has already been documented. Many Alberta counties are seeing a big jump in clubroot positive fields this year, and for each field surveyed and documented as having clubroot, there may be 10 other fields that have not been tested but have the disease. Clubroot scouting is ideally done before swathing when galls are white and easier to see. As crops approach swathing time, the galls will start to decay and can be difficult to identify. A DNA test can be done on roots that are too difficult to diagnose visually. Confirming the presence of clubroot in a field is the first step in taking measures to contain and manage the disease.

Blackleg. Rating canola stems for blackleg is best done prior to swathing — before other saprophytic organisms start feeding on dying plant tissue and make it difficult to distinguish discoloured stems as distinctly blackleg. A post harvest disease assessment could still identify the presence of blackleg (and help you in planning your rotation strategy), but it should not be used to accurately assess disease severity and make any accurate estimate of yield loss. Blackleg symptoms tend to occur around the crown of a canola plant. If you are seeing grey lesions further up the stem you may be seeing another disease.

Grey stem confusion. After swathing, silvery grey patches caused by grey stem can infect canola stems from near the crown to higher on the stem. Grey stem can produce pycnidia, the tiny black specks associated with blackleg, but these specks show up all over the grey stem. Blackleg pycnidia only show up inside the tan lesions. Blackleg stems turn woody and brown, not grey. Using clippers to expose the inside of the crown is the most reliable way to distinguish which disease you have. Note that of these two diseases, only blackleg creates necrotic tissue inside of the crown.

Root rot vs blackleg. If you’re having difficulty distinguishing whether a diseased stem is root rot or blackleg, pull up as many as you can and clip them. With root rot, you will see brownish coloured tissue, not black. If you’re finding root rot symptoms, but you’re also finding blackened tissue, chances are the plant also has blackleg — and that blackleg may be growing more aggressively after root rot killed the plant. To help in the diagnosis, look at live plants around a dead patch. If they’re showing internal blackening as well, the key disease in question is likely blackleg.

Black and green dust on swathers? Alternaria black spot is the likely cause. Alternaria rarely causes yield loss in napus canola, but it can spread over a plant as it dries down, leaving whole swaths looking black. This is usually just a visual problem, but it can possibly cause pods to pop. Another possible cause of black and green dust is sooty mold, which can grow on dried down pods. It tends not to be on green pods. Sooty mold is loose and crumbly and brushes off easily.

Disease update: Blackleg, sclerotinia, foot rot, clubroot
Growers can’t do much to prevent disease at this stage of the season, but scouting and identifying disease is easier in the weeks leading up to harvest. Identifying disease now means growers will be able to take measures to avoid spreading this disease this fall, and makes better management decisions with regard to crop rotation…
How to tell blackleg, sclerotinia and clubroot apart
Sclerotinia stem rot and blackleg can both cause what looks like pre-mature ripening. Both diseases, when severe, can cut off nutrient flow up the stem, resulting in a whitened dead plant. Both can cause increased lodging. However, long-term management requires an accurate identification of which disease is the cause. Disease identification will make sure you…
Disease update- determine what may be taking some of your yield away
For a quick estimation of what’s going on in fields, pull at least a dozen plants in every field you scout. Then, inspect the roots for clubroot, take a look at the stems for sclerotinia and cut at the base of the stem to examine for blackleg. Repeat in suspicious-looking thin, dead or drowned out…
Disease Update
Relatively low levels of sclerotinia infection can be found in most areas except in heavy and late maturing crops in northwest Saskatchewan where disease pressure is high due to frequent rains through the flowering period. Higher amounts of alternaria are occurring in B. juncea and B. rapa in western Saskatchewan and in B. napus fields…