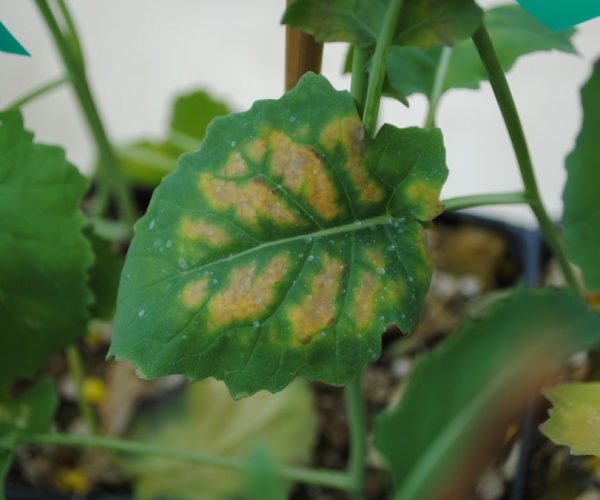 Canola requires 14 essential nutrients, which are classified as macronutrients (nitrogen, phosphorus, potassium and sulfur, magnesium and calcium) or micronutrients (iron, manganese, zinc, copper, boron, molybdenum, chlorine and nickel), based on the relative amounts needed by the plant. Macronutrients are needed in large amounts relative to micronutrients.

Calcium is a macronutrient absorbed in relatively large amounts by canola. However, deficiencies in western Canada are rare due to ample soil reserves. Calcium is often referred to as a secondary nutrient, probably due to uncommon deficiencies and non-specific roles in the plant.

Canola has high demand for calcium. Canola needs Calcium at about double the level of sulphur and phosphorus, but deficiencies in western Canada are rare due to ample soil reserves. Also, only 10 per cent of plant Calcium ends up in canola seed. The rest is returned to the field in crop biomass. This is why Ca, while needed in large amounts, is considered a secondary nutrient.

Role of calcium in canola plants

Calcium performs several roles in the plant. In contrast to other macronutrients, a high proportion of calcium is found as a structural component in cell walls. Calcium’s structural function is to provide stable but reversible molecular linkages. Pectins are calcium compounds in cell walls that strengthen the wall and contribute to tissue resistance against fungal and bacterial infections. Calcium also plays a fundamental role in membrane stability and maintains cell integrity. This membrane protection is important under low temperature or saturated soil stress. Calcium bound at membrane surfaces can be exchanged with other cations (such as K+, Na+ and H+). Calcium exchange with sodium at membrane surfaces is a main factor in salinity stress. Also, calcium replacement with aluminum (Al+3) (or blocking of calcium channels) is a factor in aluminum toxicity in acid soil.

Cell extension requires calcium. Rapidly growing parts are, therefore, most affected by calcium deficiency. Root extension, shoot elongation and pollen growth are dependent on adequate calcium. The secretion of mucilage by root caps (that help root tips penetrate through soil) also needs calcium. Downward root growth (gravitropic response) relies on adequate calcium in the root caps. Callose formation is another example of a process involving calcium. In response to injury, cells will produce callose instead of cellulose, which helps wounds to heal and reduce infection.

Most plant calcium is present in leaf vacuoles where it likely contributes to the cation-anion balance. Calcium also stimulates a range of enzymes, but generally is not a constituent of enzymes. Calcium plays a key role in plants as a secondary messenger in turgor regulated processes such as stomata opening and closing.

Response of canola to applied calcium

Western Canada has relatively new soils, and calcium levels are still very high. For example, of the 863 canola tissue samples ALS labs tested for calcium deficiency in 2012, only one was below 0.4 per cent. Calcium deficiency tends to be more common in older, more weathered soils that have been farmed for much longer and are exposed (no snow cover) more months of the year.

The table below shows exchangeable and extractable calcium reserves in Western Canadian soils. These levels are considered well above deficiency levels, but in fact there is no good criteria to determine the connection between soil calcium levels and deficiency.

Table 8. A survey of calcium levels of 1,220 western Canadian soils

In western Canada, responses to calcium have been reported in the Peace River Region and East Central Alberta and are associated with soils of high sodium content.

The calcium content varies between different plant parts and ages, ranging from 0.2 per cent to five per cent. The highest calcium contents are found in old leaves. At maturity, only about 10 per cent of plant calcium is found in the canola seed.

Situations that produce the greatest chance of a response

Calcium deficiency is possible in:

A soil test can provide soil calcium levels, but no soil criteria have been established to show at what level soils are considered calcium-deficient for canola.

A tissue test may show plants are deficient in calcium, but calcium may be in the soil at adequate rates, the plant just can’t access it because of saturated soils. A rescue application of calcium will not help in this case. Plants often recover after soils dry out.

The cationA positively-charged ion (ion with a net positive charge). More exchange capacity (CEC) is a measure of a soil’s ability to hold on to key positively charged nutrients, such as calcium, magnesium and potassium, and keep them close for when the crop needs them. In western Canada, soils with high clay and high organic matter tend to have a high CEC, so these soils are more likely to have an adequate supply of these nutrients on hand. A CEC of one milligram of hydrogen equivalent (meq) per 100 grams of soil is very low. CEC is ideally between 10 and 30 meq per 100 grams. To calculate CEC on a soil, take the soil’s percentage of clay and multiply by 0.5, then take the percent organic matter and multiply by two. Then add these two numbers to get CEC.

Fertilizer sources and methods of application

Calcium nitrate or calcium sulphate are the most common calcium fertilizer products.

Calcium carbonate (CaCO3 or limestone), or calcium oxide (CaO or lime) is used to raise the pH on acid soils. It can also have the added benefit of increasing soil calcium content, but is not generally recommended as a calcium treatment in soils that don’t need pH adjustment.

Foliar, dribble band liquid formulations are on the market from various sources and in various blends, often including a mix of micro- and macronutrients. This is a better application method than seed applied for a macronutrient such as calcium as it allows for rates sufficient to correct deficiencies.

Research in Alberta and by the Canola Council of Canada in 2000 using seed treatment with Ca5S did not find a response in canola at nine locations.

Of all the macronutrients, magnesium is absorbed in the least amount by plants. Magnesium deficiencies are rare on the prairies, similar to calcium. However, magnesium has more specific roles in plant function than calcium.

Role of magnesium in canola plants

Magnesium is the central atom of the chlorophyll molecule, and depending on the magnesium sufficiency level, up to 25 per cent of the total plant magnesium is bound to chlorophyll. Magnesium is also needed for protein synthesis, and to activate many enzymes such as glutathione synthase, carboxylases, phosphatases, and ATPases. Most of the plant magnesium is contained in cell vacuoles where it serves as a reserve for the metabolic pool and contributes to cation-anion balance.

Characteristics of magnesium uptake by canola

Table 10. A survey of magnesium levels of 1,220 western Canadian soils

Soils slightly acidic to neutral in pH tend to have the highest available magnesium levels. This is due to magnesium being a weak competitor for exchange sites on soil colloids and root binding sites. At higher pH and in soils with free lime, Ca+2 will dominate the exchange sites, possibly inducing magnesium deficiency. In contrast, at low pH, hydrogen (H+), aluminum (Al+3) and manganese (Mn+2) under flooded conditions, will dominate the exchange sites, inducing magnesium (and calcium) deficiency. High potassium (K+) or ammonium (NH4+) levels in the root zone due to fertilization may also induce magnesium deficiency, although it is often short term. High magnesium levels relative to calcium can induce a calcium deficiency. This has been reported in barley grown on solonetzic soil in Alberta with high magnesium: calcium ratios.

Magnesium level is highest during early vegetative growth (about 0.5 per cent), and declines with maturity. Stems and roots contain the least magnesium. At harvest, straw magnesium level is less than 0.2 per cent while canola seed contains about 0.3 per cent magnesium. Roughly 1/3 to ½ of the above ground magnesium is contained in the seed (about seven or eight kilograms per hectare or six or seven pounds per acre).

Of the macronutrients, magnesium is absorbed in the least amount. Magnesium deficiencies are rare on the Prairies, similar to calcium.

Little information exists on magnesium requirements of canola. There are no known cases of canola response to magnesium fertilizer in Canada or Europe. Therefore, no reliable soil or canola tissue test criteria exist. However, magnesium deficiency appears unlikely in slightly acidic to neutral soils that do not have excessive amounts of root zone calcium, potassium or ammonium.

If magnesium deficiency were to occur, it would be more likely in soils with:

Actual photos of symptoms on canola are lacking due to the rarity of actual in field deficiencies. However general symptom descriptions suggest interveinal or blotchy chlorosis or necrosisA symptom of plant cell or plant tissue death. More on older leaves as most likely.

Fertilizer sources and methods of application

Magnesium sulphate is the most common magnesium fertilizer source.

Table 11. Tissue test levels for micronutrients in canola: at flowering, in parts per million (ppm)

Excess moisture can cause calcium deficiency and “ribbon stem”
Most Prairie soils have more than enough calcium to satisfy crop needs, but short-term deficiencies can occur in plants under stress from excess moisture. Saturated soils due to long periods…
Station 5: Potassium, Boron and Calcium
Station hosts: Derwyn Hammond, CCC Dan Orchard, CCC Greg Sekulic, CCC   Potassium. For every 5 pounds of nitrogen a canola plant takes up, it needs 4 pounds of potassium.…
Diagnosing nutrient deficiency
Visual assessment of nutrient deficiency symptoms is not good enough for an accurate diagnosis because symptoms can have many causes. Purpling is one example. Purpling is often considered a tell-tale…
Need to know: Potassium (K)
Canola plants need 2.1-2.5 pounds of potassium* for every bushel of seed yield produced, but remove just 20-25% of that with the harvested seed. Most potassium (K) taken up is…