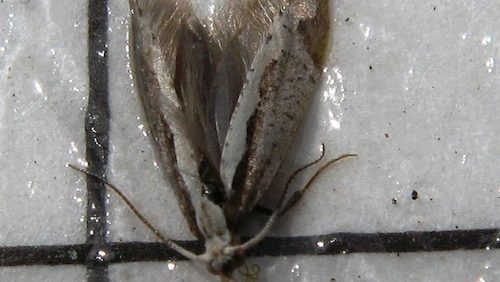 Adult diamondback moth numbers are higher than usual in the southern Prairie for this time of year. Diamondback moth larvae are not a threat to canola until later in the season, and a lot can happen between now and then. Rain can drown young larvae and natural parasitoids can feed on larvae, possibly reducing a high population to below economic levels. By scouting for early presence of adult moths and taking counts, entomologists can estimate regions where diamondback moth are at higher risk of reaching economic levels.  But whether that population gets large enough to warrant a spray will be determined by looking for larvae on the  plants .

Striped flea beetles seem to be more common each year, especially in the northern canola growing regions. Research suggests that a population of striped flea beetles may do more feeding on seed-treated canola prior to control than a similar population of the crucifer type, so look closely when scouting. Seed treatments also work best under warm dry conditions. If wet and cool, look for feeding on the underside of leaves and for girdling of stems. Listen to AAFC entomologist Julie Soroka talk about new flea beetle research on ACPC radio.

Cutworms active already. Samples from northwest Saskatchewan confirm that cutworms are already out and active in that region. The species is probably dingy, which overwinters as larvae.

Flea beetles: More striped
Striped flea beetles, shown above, seem to have become the dominant species in many regions, with crucifer species harder to find. This has been observed in fields in central Alberta, in particular. Research shows that striped flea beetles emerge earlier than crucifer flea beetles, so one thought is that the crucifers have not emerged, yet.…
Striped flea beetles are tough and moving in
You have two important reason to watch closely for striped flea beetles this year. 1. They are more tolerant of seed treatments currently on the market, so striped flea beetles are more likely than crucifer flea beetles to live through the seed treatment protection period. 2. Striped flea beetles are gaining territory, especially in central…
Insect update: Flea beetles on volunteer canola
Flea beetles have been spotted on volunteer canola. This does not necessarily mean that populations are high and that canola is at greater risk, but it’s a chance to scout and see what type of flea beetle is present. Flea beetle populations are shifting, and central regions in particular are seeing the most dramatic shift…
Insect update: Early diamondback feeding
Early diamondback moth (DBM) eggs are hatching, and some young canola plants could begin showing “window paning” of the leaves. Tiny first instars feed inside the leaves, consuming the green material and leaving the clear membrane behind. It looks like a window pane. Feeding on seedlings is usually quite limited and rarely causes economic damage,…