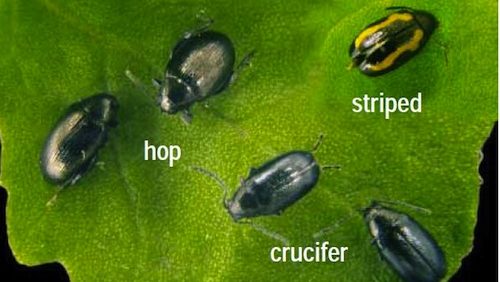 You have two important reason to watch closely for striped flea beetles this year.

An AAFC study from 2007-11 demonstrated this population shift, with striped flea beetle numbers increasing through Manitoba, Central Saskatchewan and central Alberta. Interestingly, the dominant population at some locations seems to swing from one species to the other and back again. For example, in southern Alberta, striped accounted for 1% of flea beetles in 2008, then 62% in 2009 and back down to 4% in 2010.

In general, crucifer flea beetle remains the dominant species in southern regions, but the shift could come quickly. Study results from Brooks, Alberta emphasize this point. The study found that striped flea beetle proportions at Brooks increased from 0.4% in 2008 to 70.6% in 2011. Brooks may represent “the front” of the population reversal, the report says.

Growers who haven’t looked closely — and it can take a close look to tell the difference — in the past couple years may be in for a surprise. When scouting for striped flea beetles, look for two orange or tan stripes down the back. Also, striped flea beetles will emerge earlier, so they could be a greater threat to earlier seeded canola.

If flea beetle populations are high, and canola is slow progressing through the early stages, growers may not be able to rely on seed treatment insecticide alone.

Note that the previous statement can also apply to crucifer flea beetles. No matter which region you farm and which flea beetle is predominant, regular scouting of flea beetle feeding is important.