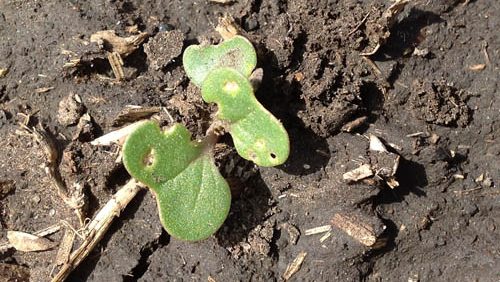 Flea beetles have been spotted on volunteer canola. This does not necessarily mean that populations are high and that canola is at greater risk, but it’s a chance to scout and see what type of flea beetle is present. Flea beetle populations are shifting, and central regions in particular are seeing the most dramatic shift from crucifer type to striped.

If flea beetles are already out and on volunteers given the conditions we’ve had, as soon as it gets warm, they will be feeding more aggressively.

Listen to ACPC’s Growing with Canola podcast with Troy Prosofsky on the topic of flea beetles.

Diamondback moth. Some Alberta locations are showing increases this week. Alberta Agriculture explains what this means: In short an early population of the size indicated by early monitoring means that it is very likely that diamondback moth will go through 3 to 4 generations in the Prairies this year and that large, damaging populations are possible by the end of the growing season. As well we know a lot can happen between now and then. The impact of diseases and natural enemies cannot be underestimated as they often hold the development of damaging populations back enough that treatment is not needed. Click here for the full article.  Click here for the most updated Alberta numbers.

Cutworms. Cutworm losses can occur early in the season. Check emerged canola crops for missing plants. Could be cutworms. Could be seedling diseases. Cutworm researchers are calling on growers and agronomists to help them collect samples, and learn more about cutworm management in canola and other crops. Click here for more information on collecting.

Insect update: Diamondback moths early, striped flea beetles
Diamondback moth numbers high, early Adult diamondback moth numbers are higher than usual in the southern Prairie for this time of year. Diamondback moth larvae are not a threat to canola until later in the season, and a lot can happen between now and then. Rain can drown young larvae and natural parasitoids can feed…
Insect update: Cutworms, flea beetles, grasshoppers
Cutworms: Some fields have economic levels of cutworm feeding, evident by missing or clipped of plants and the presence of cutworms in the topsoil. How to scout. However, cutworms will start to pupate soon, so will be less of a concern. To help enhance our understanding of cutworms, please participate in an Alberta monitoring study.…
Insect update: Flea beetles, cutworms
Flea beetles Canola is advancing quickly, often emerging in 5 days and starting to sprout its first true leaf in just over a week. Flea beetles are also out in big numbers — enough to warrant a few walks through each field. Seed treatments will provide 3 to 4 weeks of protection for canola that…
Insect update: Cutworms, flea beetles, aster leafhoppers
Flea beetles remain the single biggest insect threat this week, although pressure seems to be waning. Cutworm losses have been reported in a few fields across the Prairies, but damage is usually patchy within a field and nearby fields might not have any losses. The key with all insects is to scout and count and…