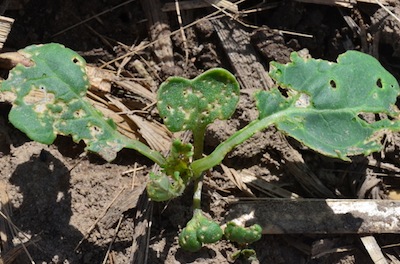 Canola is advancing quickly, often emerging in 5 days and starting to sprout its first true leaf in just over a week. Flea beetles are also out in big numbers — enough to warrant a few walks through each field.

Seed treatments will provide 3 to 4 weeks of protection for canola that emerges within a week of seeding. Flea beetles need to take a bite of the plant in order to take up the insecticide, so there will be some feeding even while the seed treatment is working. But scouting is still necessary for three reasons: (1) In some cases, intense nibbling by a very large flea beetle population could overwhelm the seed treatment. (2) Seed treatments may wear out in slow germinating or growing crops before the plants are large enough to tolerate much feeding. And (3), the two most common seed treatment insecticides may be a bit less effective on striped flea beetles, so check which one is most common in your field. Most areas of the Prairies have both striped and crucifer flea beetle species.

Here is how to make the flea beetle spray decision:

Step 1. Assess damage. The economic threshold for flea beetles in canola crops in Canada is an average defoliation level of 25% or more of the seedling leaf area. The point at which foliar insecticide provides an economic benefit could be when damage reaches 50%, but feeding can reach this stage fairly quickly when flea beetle numbers are high and damage is already at 25%.

Step 2. Look under leaves and on stems. High winds may force flea beetles off leaf tops and down to leaf undersides and leaf stems. This could actually make the situation worse, since it takes just a few bites on a stem to nip off a whole cotyledon or sever the stem. Stem feeding, if it’s happening on a lot of plants, has a lower control threshold than the 25% damage recommended for leaf feeding.

Step 3. Assess flea beetle numbers. Are the insects still present in the field and continuing to feed? If it looks like populations are dwindling, a spray may not be necessary.

Step 4. Scout the newest leaves. If newest leaves are 25% defoliated and flea beetles continue to feed, then spraying is probably warranted. Look closely. Under intense pressure, flea beetles may take out first true leaves before they amount to anything. If newest leaves are growing fast and virtually untouched, spraying is probably not necessary — even if the cotyledons sustained heavy damage. This crop will likely outgrow the threat.

Step 5. Consider the plant stand. With a thin stand of 4 plants per square foot, for example, growers can’t afford to lose any plants and may want to take action when damage is only 20-25%. But with 10-14 plants per square foot, growers can afford to lose a few plants without sacrificing harvest yield. But scout closely. Heavy feeding pressure can wipe out even a thick stand.

Step 6. Check a number of areas within the field. A sampling protocol could include inspecting 20 randomly selected seedlings at each of 10 sites in a field. Sites should include field edges, within-field locations, and topographic features such as tree lines, hedgerows, and bluffs. Note that checking field edges is not enough. Flea beetles, especially earlier in the season, tend to be more plentiful at field edges, particularly edges beside fields that were in canola the year before. One nice day may be enough to spread them across the field.

Step 7. Check the crop stage. After the 4-leaf stage, the threat is likely over. If the crop is uneven, and some is at the 4-leaf stage and the rest is earlier, keep scouting until most of the crop has passed that stage.
Check canola fields daily for flea beetle damage, especially if the weather is warm and if the fields are seeded on or near canola stubble. Keep in mind that for canola seeded in early May, seed treatment protection will be breaking down. Seed treatment insecticide starts working right after seeding. If you have enough moisture for seed to imbibe and germinate, you have enough to solubilize the active ingredient and allow it to move into the plant. Once that happens, high rate seed treatments will be active for about 4 to 5 weeks.

Step 8. If necessary to spray, use only registered pesticides. Refer to product labels for proper use instructions.

Cutworms: How to scout

At least one field in southern Alberta was been reseeded due to cutworm damage. Cutworm losses have also been observed in northeast Saskatchewan, and parts of Manitoba. Cutworm scouting begins with a walk through the field looking for bare patches, chewing damage in foliage, or clipped plants.

If you find patches of missing or damaged plants, dig around healthy plants next to the missing of damaged plants. Cutworms have likely moved on to these nearby healthy plants. Many cutworms are underground during the day or feed only at the soil surface, so day-time scouting requires digging. In moist soils, cutworms will stay close to the surface. In dry soils, they may go down 8-10 cm (up to 4”).

Dig a one square foot area to a depth of 10 cm and put the soil into a basin. Loosen the soil and shake it up to activate cutworms. Also look for frass (cutworm excrement) around roots. Repeat a few times throughout the field.

Try to identify the cutworm species. Knowing the species can be helpful in fine-tuning the control measures. Also look for orange pupae. Cutworms are not feeding at the pupal (cocoon) stage and are no longer a threat to this year’s crop.

When scouting for cutworms, think back to last year. Fields that had flowering plants (crops or weed patches) in August or September of the previous year may have higher cutworm counts. These flowers attract some species of adult cutworm moths, which lay their eggs in these areas. This explains why cutworm damage will often appear in patches.

Insect update: Flea beetles, cutworms, scarab beetle larvae
A few flea beetles do not warrant an insecticide application. Follow these guidelines when making a flea beetle spray decision: Is leaf area loss more than 25%, on average? The economic threshold for flea beetles is when canola plants over a wide area of the field have 50% leaf defoliation. However, entomologists developed a 25%…
Insect update: Cutworms, flea beetles, CSPW, grasshoppers
The 6-leaf lull. At the 6-leaf stage, canola has moved past the vulnerable stage for early season insects and is not yet at the flowering stage when the next vulnerable stages begin. Spraying insecticide at the 6-leaf stage in canola is almost always a waste of time and money, and only hurts beneficial insects. Cutworm…
Insect update: Cutworms, flea beetles, aster leafhoppers
Flea beetles remain the single biggest insect threat this week, although pressure seems to be waning. Cutworm losses have been reported in a few fields across the Prairies, but damage is usually patchy within a field and nearby fields might not have any losses. The key with all insects is to scout and count and…
Insect update: Flea beetles on volunteer canola
Flea beetles have been spotted on volunteer canola. This does not necessarily mean that populations are high and that canola is at greater risk, but it’s a chance to scout and see what type of flea beetle is present. Flea beetle populations are shifting, and central regions in particular are seeing the most dramatic shift…