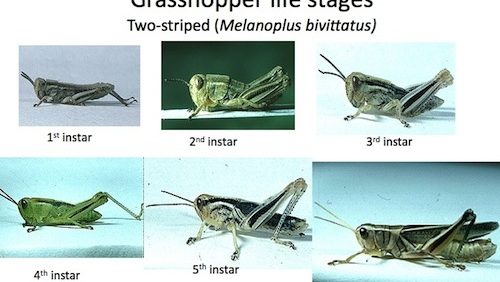 Cutworm scouting. Cutworm spraying is not widespread this year, but areas within some fields have reached the nominal threshold of 25-30% plant loss. Cutworm spraying can be effectively targeted to only those areas around where feeding is evident. Read the article in this issue of Canola Watch on how to scout for cutworms. Leaf feeding was observed in some canola fields this week. Entomologists have not confirmed whether a climbing cutworm or some other insect is the cause. Note that the feeding is not typical of diamondback moth larvae and is too early for bertha armyworm.

Flea beetles still feeding. The yield threat from flea beetles is generally over by the 4-leaf stage of the crop, but some fields at that stage are taking heavy losses — especially in Manitoba and Ontario. If flea beetles are still feeding and leaf area loss on newest leaves is 25%, then spraying may be required.

Cabbage seedpod weevil numbers are building in some fields in southern Alberta and southwestern Saskatchewan. The best time to spray is at 10-20% flower to prevent egg laying in newly formed pods. Weevils overwinter as adults on field margins, and are moving into fields now. Numbers keep building up until around 10-20% flower. Scott Meers with Alberta Agriculture encourages growers and agronomists to report their weevil counts through the online reporting system. Even if the counts are zero, this is valuable information for weevil monitoring. You need a sweep net to scout for weevils.
Where to get a sweep net.
How to use a sweep net.

Grasshoppers too small to spray. Grasshoppers at the first and second instar do very little damage, even at high numbers. (See the photos below.) And with rain and humidity, fungal diseases will often reduce a large percentage of the population before it reaches it’s most voracious stage. If the first large wave of grasshoppers reaches the third instar stage and are actively feeding in a crop, spraying may be required. Third instars have the typical grasshopper appearance, are much more mobile and have bigger appetites. And once the first bulge of the population has reached that stage, all eggs will have hatched. 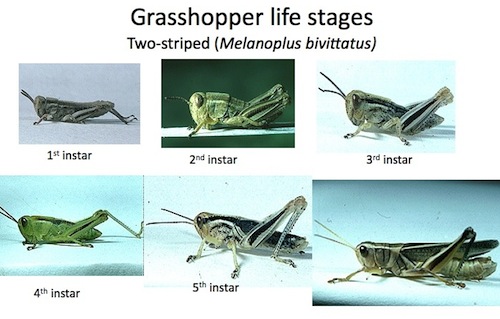 Insect update: Cutworms, flea beetles, grasshoppers
Cutworms: Some fields have economic levels of cutworm feeding, evident by missing or clipped of plants and the presence of cutworms in the topsoil. How to scout. However, cutworms will start to pupate soon, so will be less of a concern. To help enhance our understanding of cutworms, please participate in an Alberta monitoring study.…
Insect update: Flea beetles, cutworms
Flea beetles Canola is advancing quickly, often emerging in 5 days and starting to sprout its first true leaf in just over a week. Flea beetles are also out in big numbers — enough to warrant a few walks through each field. Seed treatments will provide 3 to 4 weeks of protection for canola that…
Insect update: Cutworms, flea beetles, aster leafhoppers
Flea beetles remain the single biggest insect threat this week, although pressure seems to be waning. Cutworm losses have been reported in a few fields across the Prairies, but damage is usually patchy within a field and nearby fields might not have any losses. The key with all insects is to scout and count and…
Insect update: Flea beetles, cutworms, scarab beetle larvae
A few flea beetles do not warrant an insecticide application. Follow these guidelines when making a flea beetle spray decision: Is leaf area loss more than 25%, on average? The economic threshold for flea beetles is when canola plants over a wide area of the field have 50% leaf defoliation. However, entomologists developed a 25%…