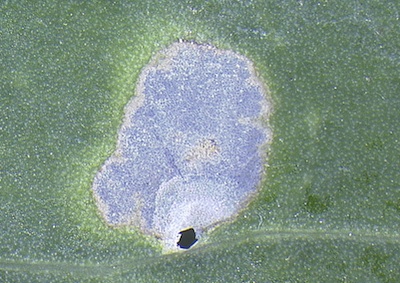 Early diamondback moth (DBM) eggs are hatching, and some young canola plants could begin showing “window paning” of the leaves. Tiny first instars feed inside the leaves, consuming the green material and leaving the clear membrane behind. It looks like a window pane. Feeding on seedlings is usually quite limited and rarely causes economic damage, but when DBM arrive early in big numbers, this is worth adding to your scout list.

Spraying for DBM at this stage has happened before. The Manitoba Insect Pest Summary for 2001 reported that some canola fields were being sprayed as early as late May, while plants were still seedlings. At least 2 fields had to be reseeded because of severe diamondback moth damage to canola seedlings.

Economic thresholds do not exist for DBM feeding on canola in the seedling stage, but the suggested nominal threshold is to consider a spray if between 25% and 33% of the plant material is eaten or damaged, and larvae are still present on the plant. Use the same products registered for diamondback larvae control later in the season.

Scouting tip: It will be hard to spot DBM larvae feeding inside cotyledons and young canola plants. In that case, look for damage in early cruciferous weeds and canola volunteers because these weeds will be further advanced and damage more apparent.

Spraying tip: Do not spray unless absolutely necessary. As noted earlier, early season larvae feeding rarely reaches economic levels. Left alone, these larvae may succumb to parasitoids, which could take down a diamondback moth population and prevent any serious damage to canola crops.  But do watch closely. If feeding outpaces potential parasitoid control, insecticide may be necessary to preserve yield potential.

Insect update: Diamondback moths early, striped flea beetles
Diamondback moth numbers high, early Adult diamondback moth numbers are higher than usual in the southern Prairie for this time of year. Diamondback moth larvae are not a threat to canola until later in the season, and a lot can happen between now and then. Rain can drown young larvae and natural parasitoids can feed…
Insect update: Grasshopper, diamondback, lygus, CSPW
Grasshoppers. If populations are significant and crop feeding has begun, a spray or bait application around field edges may be enough to reduce the threat. Grasshoppers are easier to manage when they’re small — less than the third instar. Except in cases where there are extremely high populations feeding on crop along the edges, ideal…
Insect update: diamondback, weevil, cutworm, bertha, beneficials
Cabbage seedpod weevil. Don’t spray until at least 10% flower, and even then holding off until the podding begins may provide the greatest economic return. Alberta forecasting. Diamondback larvae feeding on pods. The action threshold for diamondback larvae feeding on pods is 200-300 larvae per square metre. This threshold is based on stands of 150-200…
Diamondback moth larvae have arrived
First signs of diamondback moth larvae are larvae hanging from threads and feeding on leaves. Feeding damage is usually a mining of the leaf, giving the appearance of a “window pane.”  If the larvae are in the canopy, they will often move up to pods as leaves start drying off. Larvae feed on the surface…