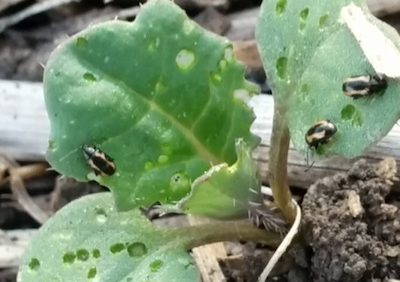 Striped flea beetles, shown above, seem to have become the dominant species in many regions, with crucifer species harder to find. This has been observed in fields in central Alberta, in particular. Research shows that striped flea beetles emerge earlier than crucifer flea beetles, so one thought is that the crucifers have not emerged, yet. However entomologists expect that most, if not all, of the flea beetles from both species should have emerged.

Scout. Dominance of striped species in a field matters because seed treatments are a bit less effective against striped flea beetles. If the crop is thinner than the last time you looked, address the issue that is making it thinner. If deemed to be flea beetles, consider the level of damage, and check that flea beetles are still present, feeding on new leaves, and that damage seems to be getting worse.

The economic threshold for flea beetles in canola crops in Canada is an average defoliation level of 25% or more of the seedling leaf area. The point at which foliar insecticide provides an economic benefit could be when damage reaches 50%, but feeding can reach this stage fairly quickly when flea beetle numbers are high and damage is already at 25%.

Look for stem feeding. Stem feeding, if it’s happening on a lot of plants, has a lower control threshold than the 25% damage recommended for leaf feeding.

New seed treatment. You may want to ask local seed retailers about Lumiderm trials in the area to see if there are any differences in flea beetle feeding. Lumiderm is the only new product on the market that uses a mode of action different from the current common seed treatments.