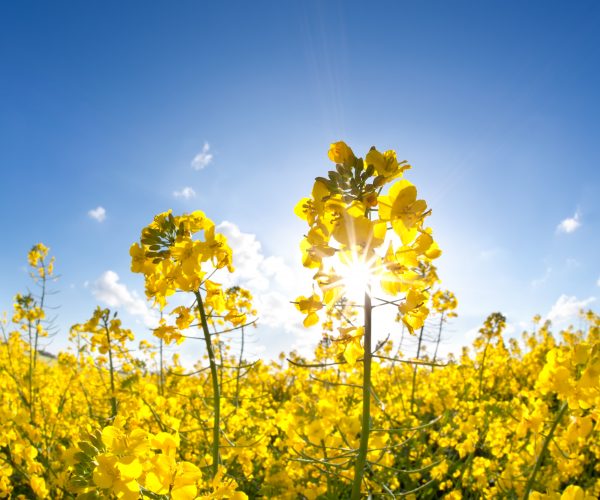 In addition to benefiting soil and water health, canola also helps reduce the amount of greenhouse gases (GHGs) in the atmosphere.

Thanks to its potential for carbon sequestration, agriculture was deemed to be the economic sector with the greatest near-term potential to mitigate GHGs by the Intergovernmental Panel on Climate Change’s 5th Assessment.

Opportunities suggested for accomplishing carbon sequestration include increasing crop yields and changing crop mix to include crop types that have large root systems.

Capturing carbon from the air

Plants need CO2 to grow and produce seed, and in turn produce oxygen, which is required for our survival. This means that growing high-yielding, large rooting crops like canola helps to remove GHGs from the atmosphere.

Soil organic carbon (SOC) in agricultural lands is vital for global food production and GHG mitigation. Canola has contributed significantly and will keep contributing to removing GHG and turning it into soil organic carbon, healthy oil and nutritious protein.

Sequestering carbon in the soil

Field crops sequester carbon, and most of Canada’s cropland has been showing increasing levels of SOC.  The Canadian Prairies have been sequestering carbon from the atmosphere since 1990, with major increases in carbon sequestration since 2005.

This increasing trend of carbon sequestration is mainly driven by increasing area and yield of canola. Approximately 70% of all the carbon sequestered by Canadian field crops is due to canola.

Increasing by about 1.5% per year with 70% of increase due to canola alone

Why is canola so effective at sequestering carbon? Canola is a high-yielding crop and has a high harvest index, which is a measurement of the yield of a crop and is the ratio of total seeds harvested relative to the aboveground biomass of the crop.

In addition to producing many seeds per plant, canola is carbon dense, meaning each individual canola seed contains a high amount of carbon, as it is a key component of the oil contained in the seed as well as other parts of the seed.

Therefore, increasing seed yields will increase the amount of GHGs removed from the atmosphere. Canola takes GHGs and turns this into healthy oil and high quality protein.

But it’s mostly due to the deep-rooting growth habit of canola.

Canola is particularly good at removing carbon from the atmosphere and storing it underground because its roots run deeper than many other crops.

The SOC reported in the chart above is only measured to a depth of 20 cm, but canola’s roots run much deeper than that, which means that canola actually sequesters much more carbon than is currently being measured.

Two studies from Saskatchewan1 and North Dakota2 found that SOC increased by 70-170kg per ha compared to spring wheat. This represents CO2 removed from the atmosphere and improving the overall health and productivity of soils.

The graph below shows how much more carbon is sequestered by canola roots than the roots of wheat.

Deep roots not only allow canola to sequester more carbon, but also make it more resilient to prolonged droughts, which may arise due to climate change.

In addition to sequestering more carbon than other plants, innovative farming practices have also allowed canola growers to emit less carbon as they grow and tend to their crops.

As a result of increased conservation tillage practices, Canadian farms now save between 126 and 194 million litres of diesel each year, reducing GHG emissions by about 450,000 to 750,000 tonnes per year3.

The chart below shows Agriculture and Agri-Food Canada’s data and reporting for the reduction of GHG emissions per unit of land for canola in the Prairies.

Canola has a strong history of helping Canada reduce its overall GHG emissions, and an ambitious plan for reducing it even further.

While we’re proud of the contributions we’ve made to carbon reduction and sequestration in the past, we know there’s more that we can achieve – and we’ve set some ambitious goals to help us get there.

Based on carbon calculations that attribute carbon change to individual crops, increasing canola yields to an average of 52 bushels per acre by 2025 will sequester an additional five million tonnes of greenhouse gases in Canadian soils each year, relative to 2005.

Increase Canada’s use of biofuels

Today, diesel fuel in Canada must contain 2% biofuel, and even at this modest level, canola-based biofuels help reduce annual GHG emissions by 4.4 megatonnes.

But with the Canadian government currently developing a new Clean Fuel Standard (CFS) to reduce GHG emissions by more than 20 megatonnes, Canada has an opportunity to increase the amount of biofuel contained in diesel, and decrease the country’s GHG emissions in the process.

Learn more about how canola-based biofuel use can make a difference in Canada.

One factor that contributes to global warming is called radiative forcing, the difference between the solar irradiance (sunlight) that’s absorbed by the Earth, and the energy radiated back to space.

When earth receives more incoming energy from sunlight than it radiates back out to space, it results in a net gain of energy that causes global warming, a process that scientists call positive radiative forcing.

But when the Earth loses more energy to space than it receives from the sun, the result is a cooling effect, called a negative radiative forcing. Land surfaces that are more reflective have an important cooling effect. And because canola happens to be the most reflective crop on the prairies, the 20-million-plus acres of canola being grown each year actively helps to cool our planet. Read more about canola’s cooling effect in this study4.

Generating more food from the same land base

Saving millions of litres of diesel fuel each year