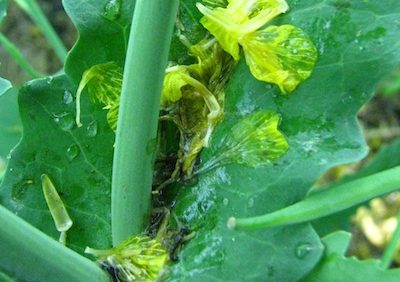 The decision to apply a fungicide to prevent sclerotinia stem rot may be generalized by answering these four questions:

If the answer is “yes” to all four questions above, then spraying is generally recommended. If the answer to some of the questions is “no”, then the decision is more difficult. This article explores the concepts in more detail.

When considering fungicide cost ($14 to $25 per acre, depending on the product) and application (estimated at $7 per acre for custom ground, $11 for aerial), a fungicide would have to preserve around 3 bu./ac. of yield to break even. This should be easily achieved in a high-risk, high-yield field. The general rule is that yield loss is roughly half of the “incidence rate” (which is the percentage of plants infected in a field). If 10 per cent of plants are infection, yield loss will be five per cent.

Moisture is the key risk indicator

Other factors that INCREASE risk

If the potential for disease is uncertain…

Grower may want to spray more than once if…

The sclerotinia spray decision: Moisture scenarios
Sclerotinia stem rot will likely occur if a field has regular rains or high humidity or both from two to three weeks before flowering and through flowering. This will get spore-releasing apothecia going in time to be active during flowering, dispersing spores on petals (and everywhere else in the canopy). If moist conditions continue after…
Dry conditions and the sclerotinia spray decision
Latest News
Moisture is the key risk factor for sclerotinia stem rot. Without moisture a couple of weeks before flowering and humidity during and after flowering, disease severity and the return on investment from fungicide will be lower than if moisture is present all through these periods. “Given the low moisture situation and lower canola yield potential…
Factors in the sclerotinia spray decision
The decision to apply a fungicide to prevent sclerotinia stem rot may hinge on answers to these four questions… Have environmental conditions prior to flowering been wet enough for apothecia development and survival?Is the canola crop canopy dense and is yield potential high?Does the weather forecast predict precipitation and/or humidity during the flowering period?Is the…
Sclerotinia: Positive petal test may not mean "spray"
Small amounts of spores can lead to yield-robbing levels of sclerotinia in continued moist conditions. A petal test to confirm the presence of sclerotinia DNA on petals could be used to provide an indication of pathogen pressure at the time of petal collection. A test that comes back zero for spores would be helpful in…