Home / Canola Watch / What to look for when disease scouting 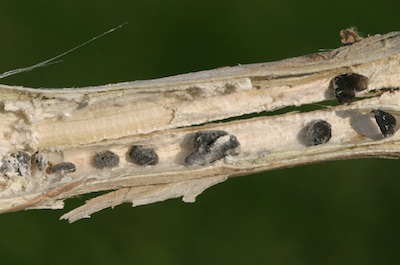 Check those patches of pre-mature ripened canola before or during swathing. Try to identify what cause this pre-mature ripening. Use the Canola Diagnostic Tool at www.canoladiagnostictool.ca to help with the assessment. It could be blackleg, clubroot, sclerotinia, root rot or something else entirely.

Growers can use this scouting information to plan rotations, choose varieties, and update fungicide decision-making for next year.

Here’s how to identify the major diseases of canola as fields get close to swathing stage:

Sclerotinia stem rot. Look for areas with lodged or prematurely ripened plants. Sclerotinia stem rot is most damaging when stem infection is early, and severe to the point where whole plants die before seed matures. Examine the lower to middle areas of the stem looking for large bleached or tan lesions. In some cases, white fungal growth may appear on green stems. You may find infection very low in the canopy, sometimes where infected leaves fell against stems at ground level. As the infected stem dries, it will appear bleached or brown (like a bone) and may start to crack open or shred. Infected stem tissue is often hollow and hard, black sclerotia bodies — similar in appearance of mouse droppings — may be found inside the infected stems. As a general rule yield losses due to Sclerotinia stem rot will be approximately equivalent to 50% of the disease incidence. For example, if 10% of stems are infected, yield loss will be about half that — or 5%.

Blackleg. Look for areas with lodged or prematurely ripened plants. Examine the bottom to middle areas of the stem for lesions. Black pepper-like specks (picnidia) may appear within the lesions. When blackleg is severe enough to cause yield loss, the plant will have irregular, knotty, woody cankers at the base of the stem. This infection will eventually grow through the stem, cutting off nutrient flow. If you see plants drying up, use garden clippers and slice through the stem at the base. If more than half the area of the stem is blackened, blackleg has likely reduced the yield of that plant.

Clubroot. Above-ground symptoms, including wilting and pre-mature ripening, should be evident in severely-infected plants. Even if you don’t see above-ground symptoms, pull plants and look for galls. Light or severe infection has essentially the same risk for spreading the disease with equipment. If galls are present, the best management at this stage is to prevent spread within the field, and certainly from field to field.

Alternaria black spot. This is rarely a problem in napus canola when the crop is standing, but some superficial infection may turn swaths black as the crop turns colour and dies. Alternaria tends to be more damaging in juncea or rapa canola. In these crops, small black spots will move up the plant, eventually reaching the pods. If alternaria is to show up in B. napus canola, it will be later in the season when weather and time have removed the protective wax covering on the plant. UV radiation, cool/warm fluctuations and hail will break down this wax barrier. Cool wet weather can also increase alternaria infection, and rain splash can spread the disease conidia to other plants. In cases of heavy alternaria infection (which is rare), early swathing may have an overall economic benefit to later swathing if alternaria has moved to pods. When infected areas make up 50% or more of the crop, swathing early may be the best way to salvage the yield in those infected plants. The disease can keep spreading on green material, and swathing hastens dry-down of the crop.

Aster yellows. Common symptoms include the malformed bladder-like pods, which produce little to no yield. The disease can also result in normal looking pods that contain only a few misshapen seeds. Other symptoms include sprouting in the pod, and purplish plants and pods, although this purpling can result from many potential causes.

Foot rot and brown girdling root rot. Canola plants exhibiting brown superficial symptoms at ground level likely have fusarium foot rot, which produces tan brown lesions with concentric markings. Another possibility affecting canola roots at adult stages is brown girdling root rot (BGRR), which is more of an issue in Polish canola. Symptoms of BGRR are rusty brown lesions on the canola tap root, which may girdle and pinch off the root if severe. These diseases can be much higher in tight canola rotations.

Grey stem. Grey silvery to purplish patches develop on stem. These can cover whole stems and continue to spread in stubble as plants decompose. Grey stem usually infects too late to cause significant yield loss. To differentiate blackleg and grey stem at the end of the season, cut the lower stem and look for dead blackened tissue in the crown — a characteristic of blackleg, not grey stem.

Verticillium stripe. Disease symptoms in canola include leaf chlorosis, early ripening, stunting and as the disease progresses, necrosis, shredding of the stem tissue. Once the plant is fully ripe, the stem peels to reveal tiny black microsclerotia which resemble ground pepper in appearance. These microsclerotia remain on the plant stem or fall to the soil. Read more.

Canola Disease Scouting – pre and post-swathing from Canola Council of Canada on Vimeo.

Disease scouting: be a diagnostic detective
Harvest is a hectic time of year, but periods of waiting to get started can be tough too. While you’re out checking to see how mature your canola is or what soil moisture conditions are like in your fields, be sure to pull up some plants and test our your diagnostic skills. There has been…
Pre-harvest scouting for disease
Pre-harvest is a good time to scout for disease severity. Fields with lots of diseased plants may also be poorer candidates for straight cutting due to the increased shattering risk. Sclerotinia —Look for areas in the field with lodged or prematurely ripened plants. —Examine the basal (bottom) to middle of the stem. If sclerotinia is…
Disease Scouting Summary
If you’re getting antsy about starting harvest or wondering when to start harvest, a great use of your time would be scouting your crop. Checking for insects and disease is important throughout the growing season, but just before swathing is the best time to assess the impacts of blackleg, sclerotinia, alternaria and clubroot. Or to…
Disease update: Sclerotinia, clubroot, blackleg, alternaria
Lots of sclerotinia stem rot. As harvest progresses, we’re hearing reports of higher levels of sclerotinia stem rot in some regions. Some fields that did not get a fungicide spray are at 40-50% infection. That works out to an estimated 20-25% yield loss, or 10-13 bu./ac. on a canola crop with 50 bu./ac. yield potential.…