If you’re getting antsy about starting harvest or wondering when to start harvest, a great use of your time would be scouting your crop. Checking for insects and disease is important throughout the growing season, but just before swathing is the best time to assess the impacts of blackleg, sclerotinia, alternaria and clubroot. Or to see if you have any unusual diseases like verticillium wilt. Did you make the right management decisions earlier in the year? To distinguish one disease from another, use these discerning traits: 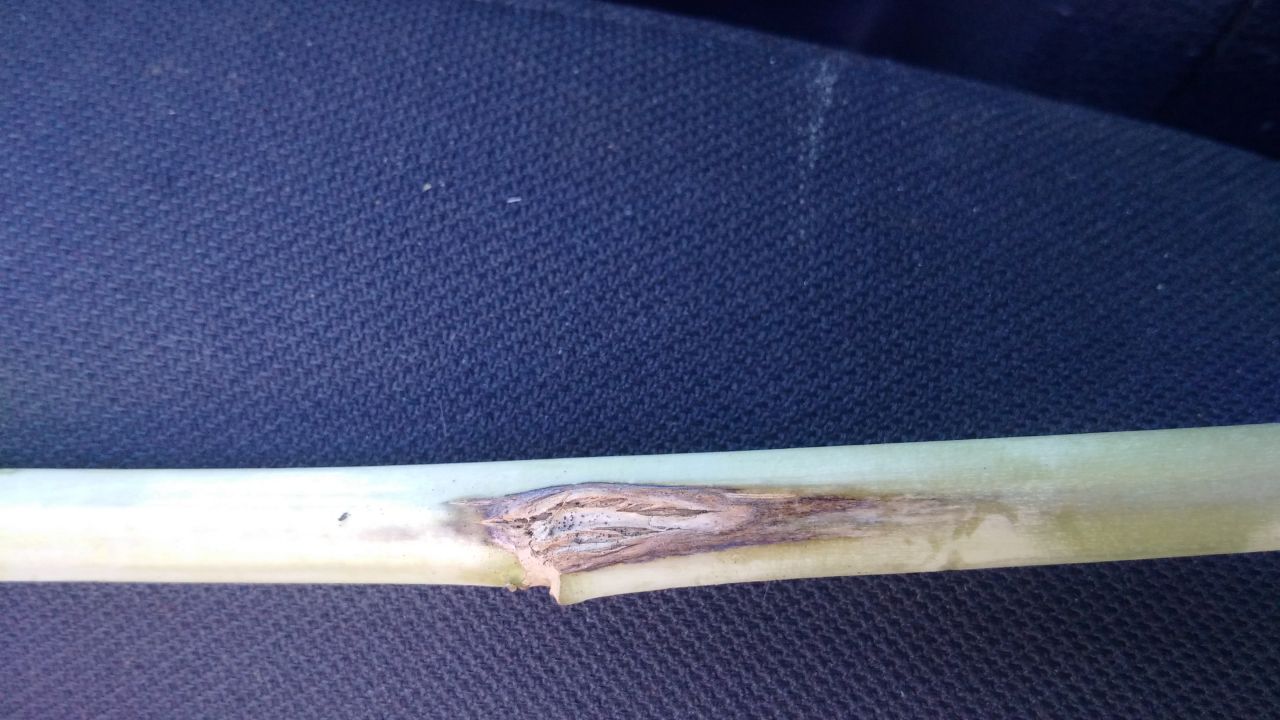 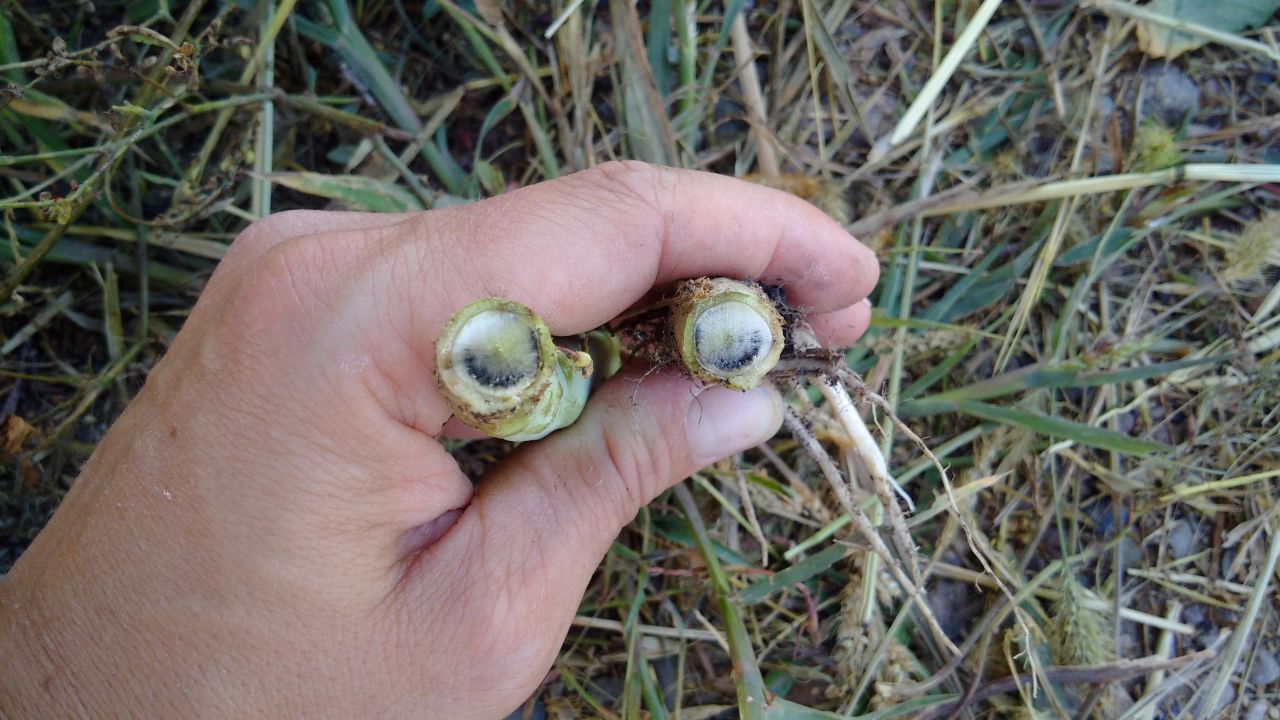 o Sclerotinia: Sclerotinia stem rot develops late in the season, with the first visual symptoms appearing by the end of flowering. The stems of infected plants eventually bleach, taking on a whitish appearance and infected tissues tend to shred apart and shatter very easily (as shown in the photo). In high humidity a white mold may be found on infected plant parts. With large lesions the stem is often hollow and may contain the hard, black resting bodies known as sclerotia. Sclerotia may be small and round to long and cylindrical, ovoid or irregular in shape. . Sclerotinia lesions will be bleached white but will lack the black spots or pycnidia that are associated with blackleg lesions. 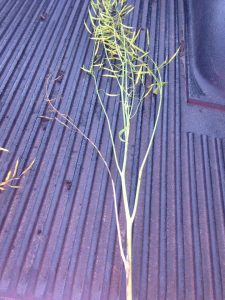 o Clubroot: Above the ground, clubroot infected canola plants may look very similar to canola suffering from other diseases or environmental stresses, such as heat, drought or other factors, so proper diagnosis should always include digging up plants to check for gall formation on roots (as shown below). Hybridization nodules on canola roots, although rare, could be confused with clubroot galls. These are small, round nodules located at root nodes and, like healthy roots, are uniformly dense inside, while the interior texture of a clubroot gall is spongy or marbled. 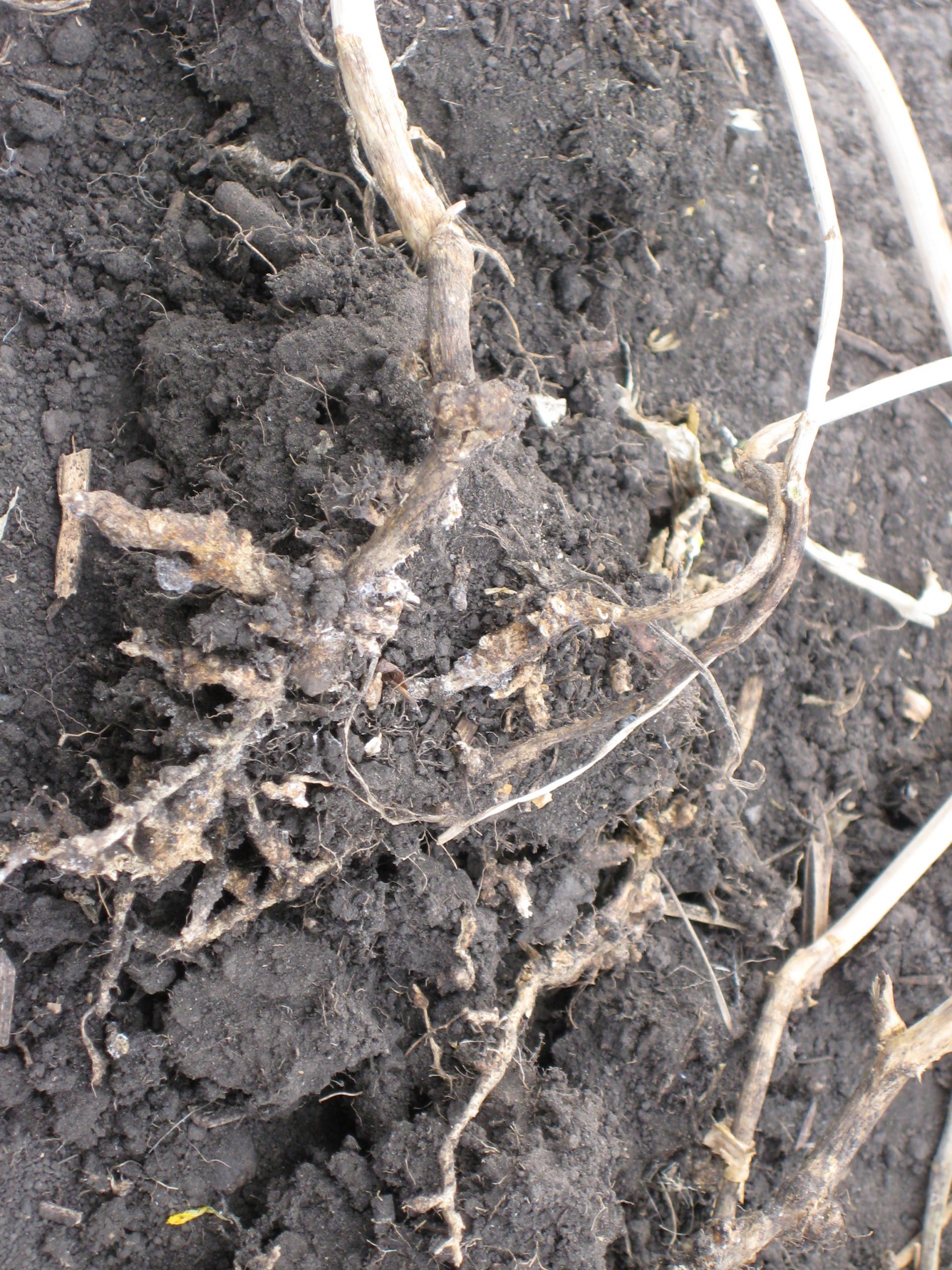 o Alternaria: Alternaria black spot disease can cause symptoms in later growth stages on leaves, leaf petiole, stem, flowers, pods and seeds. Stem and pod lesions first appear as small brown or black dots that may develop into conspicuous spots or longer and wider lesions of various shapes and the upper part of the stems and pods may wither (see image below). Pods may show sunken, dark brown to black circular lesions. Infected pods may ripen prematurely and shatter while the crop is standing or in the swath. 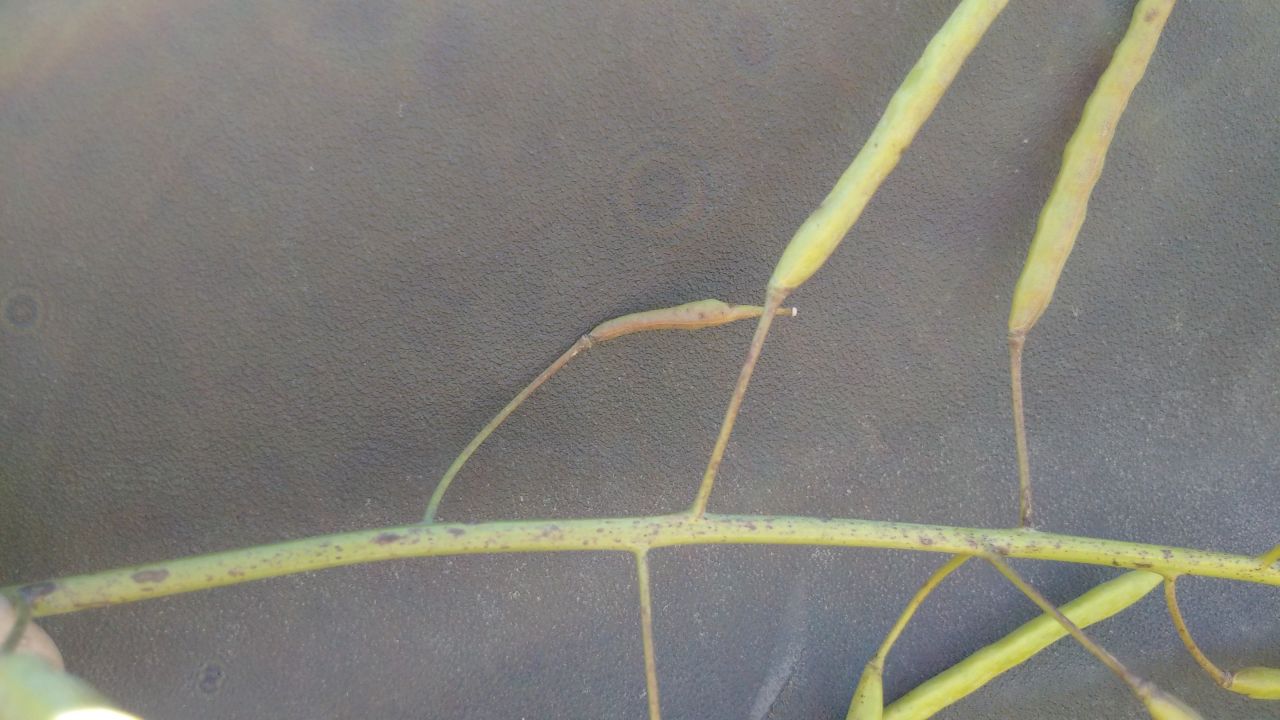 o Verticillium wilt: Verticillium wilt can cause the crop to show signs of stunting and premature senescence, with faint black (vertical) striping on the stems which, when rubbed can appear darker and more obvious. By peeling back the epidermis and outer cortex of the stem, blackening can be seen on the inside of the stem, and eventually microsclerotia.
While there may be shredding of the stem similar to sclerotinia stem rot, the large sclerotia and hollowing inside the stem will distinguish Sclerotinia from the tiny microsclerotia of Verticillium wilt. While the discoloured stem and premature ripening could also be symptomatic of blackleg, cutting the stem at ground level and observing the cross-section of the stem will clarify. 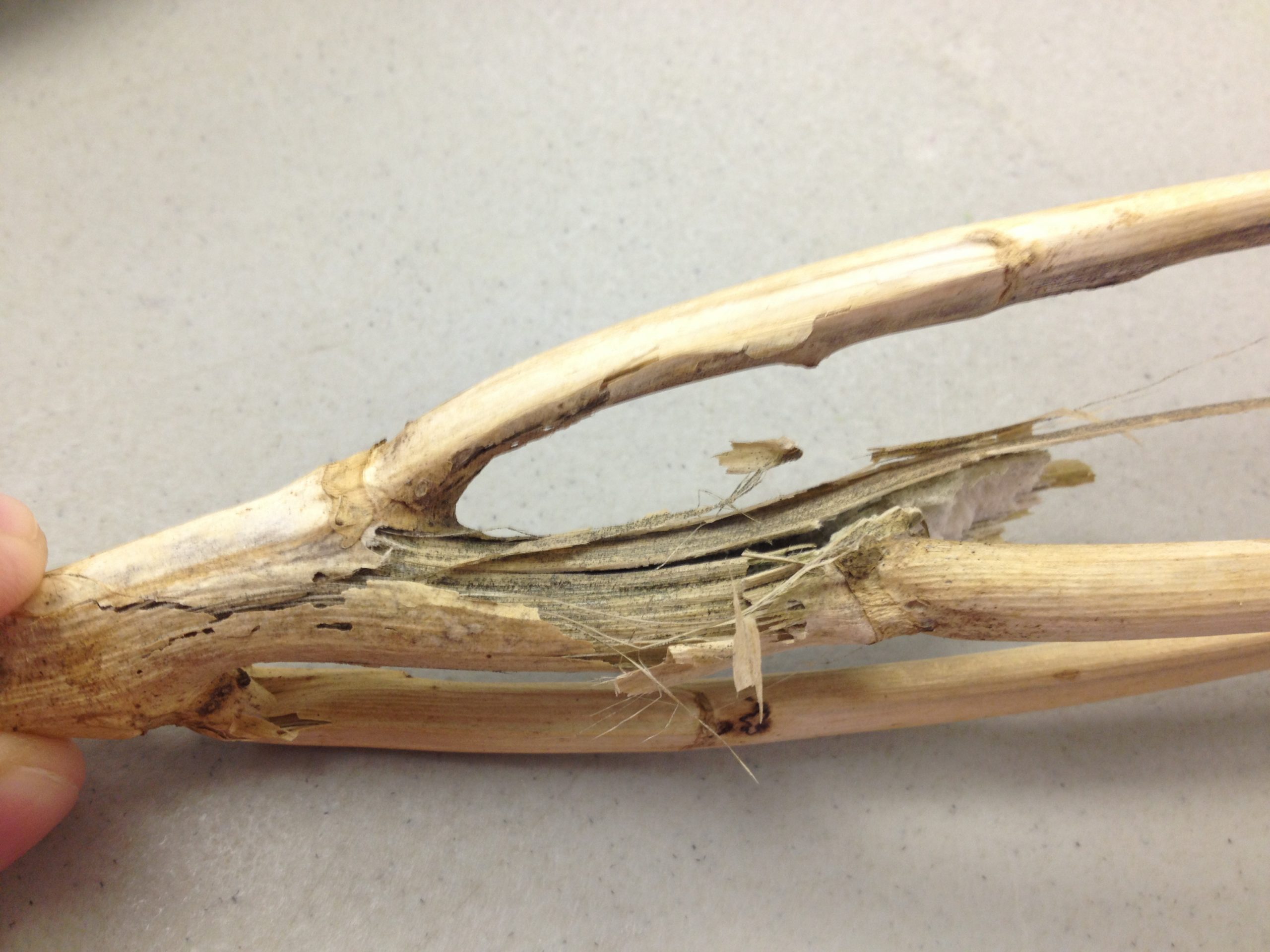 o Always note: While a prematurely ripened area can be a symptom of disease, in doesn’t necessarily mean it has to be. Have a look! It could be disease in a low area, or it could just be due to natural field variability. If all else fails, call your closest CCC agronomist! They’re happy to help!

Pre-harvest scouting for disease
Pre-harvest is a good time to scout for disease severity. Fields with lots of diseased plants may also be poorer candidates for straight cutting due to the increased shattering risk. Sclerotinia —Look for areas in the field with lodged or prematurely ripened plants. —Examine the basal (bottom) to middle of the stem. If sclerotinia is…
Disease scouting: be a diagnostic detective
Harvest is a hectic time of year, but periods of waiting to get started can be tough too. While you’re out checking to see how mature your canola is or what soil moisture conditions are like in your fields, be sure to pull up some plants and test our your diagnostic skills. There has been…
Disease Update
Relatively low levels of sclerotinia infection can be found in most areas except in heavy and late maturing crops in northwest Saskatchewan where disease pressure is high due to frequent rains through the flowering period. Higher amounts of alternaria are occurring in B. juncea and B. rapa in western Saskatchewan and in B. napus fields…
Scouting late July for disease
The window to control disease in canola is closed, so why scout? Well, because the period from podding to harvest is the easiest time to see diseases. And if you can identify which diseases are present, you can adjust your variety choice, crop rotation and fungicide use for subsequent years. Symptoms are maximized at physiological…