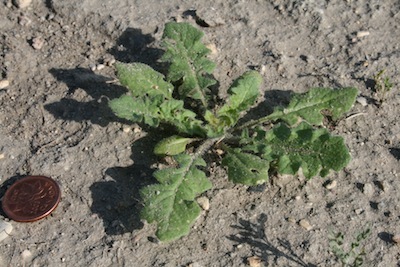 Clark Brenzil is the weed management specialist with Saskatchewan Ministry of Agriculture. He offered to answer these questions, which we had gathered from agronomists:

Should we really be concerned about glyphosate resistance?  We’ve been managing weed resistance in other Groups and we have lots of tools now.

Clark Brenzil: Glyphosate underpins our direct seeding system. More than 95% of burnoff treatments include glyphosate. That puts a lot of pressure on one herbicide active to support a whole agronomic system. With weed resistance to other herbicide groups, growers have had a broader selection of direct alternatives. There is not the same selection of alternatives to glyphosate at this point that will provide the full range of utility (non-residual, broad spectrum, systemic, with good environmental and safety profile) that glyphosate does. There are many herbicides that can provide a portion of that utility, but not check all of the boxes. The next best option is to apply glyphosate with a tank mix whenever possible with one of the products that provide a portion of the utility of glyphosate. Luckily tank mixing can provide more protection for glyphosate than rotation. Hitting weeds with a tank mix greatly reduces the chance of resistance evolving to either herbicide in the mix. This only applies however, if the targeted weeds in the field have not already developed resistance to one of the herbicides.

Keep in mind that kochia and to a lesser degree cleavers are examples of weeds with high levels of resistance to Group 2 herbicides (practically all populations of kochia). In cases where resistance to a herbicide Group is already well established, tank mixing glyphosate with a herbicide from the Group for which the weed is already resistant will not help to protect against the selection for glyphosate resistance in weeds. You want to find a tank mix where both actives are still effective on that weed.

This can be a challenge for cleavers in peas, for example, which is why a weed control program needs to include a plan for all crops in the rotation. Cleavers and volunteer canola, to give two examples, allow more flexibility of herbicide choice for control before or in cereal crops, given the broader range of herbicide group options available.

What weeds should I look out for that may not be on our radar?

Clark Brenzil: Tall hedge mustard (see below) is a winter annual and becoming more common in low disturbance fields. It resembles dog mustard. Canola producers may also want to keep an eye out for hoary alyssum (see below), a winter annual in the mustard family. It’s not very competitive, but likes sandy soils typically. In Saskatchewan, it has been found at White City, Regina, Prince Albert and Govan. After a long period of direct seeding, growers are seeing weeds that favor low disturbance creeping in from field edges. These even include weeds generally regarded as pasture weeds, such as leafy spurge, common tansy, absinthe and golden rod, creeping in from edges in no-till. Narrow tilled strips around the outside of a field can easily keep these weeds at bay and put less stress on herbicide systems to manage them. These tilled headlands and edges do not compromise the benefits from the direct seeding system.

What rate is too high or too low when trying to prevent resistance issues?

Clark Brenzil: The right rate is the label rate because it’s been established to control the weed you’re targeting. Target site resistance, the most common type of herbicide resistance in weeds, develops as a result of a single gene mutation that prevents the herbicide from associating with the target site. It doesn’t develop because rates were too high or too low. If the rate was sufficient to control the weed, the susceptible individuals are killed off leaving only the individual(s) that carry the modified (resistant) target site. The risk of metabolic resistance, which is more complex and rare, can be minimized by using the full rate on a regular basis.

Kochia uses a unique mechanism to resist glyphosate toxicity. Contrary to target site resistance, the target enzyme remains susceptible to the herbicide, but the plant produces grossly excessive amounts of the susceptible target enzyme, that ties up all the glyphosate applied, leaving plenty of the enzyme available for the plant to function normally. We don’t really know yet how kochia produces the excess emzyme, so it’s hard to predict how use rates influenced this.

What we do know is that tank mixing herbicides and rotating herbicides and crops are far more effective ways of protecting against the development of resistance to either herbicide in the mix, than fiddling with herbicide rates. If growers are noticing a weed problem as a result of using the lower label rates of herbicides, it may simply be that the rates are not adequate to controlled the weed under the conditions present at application. Constant use of inadequate rates is likely to shift weed communities in favour of the weeds that are not being controlled at that rate.

Use the appropriate rate for the hardest to kill weed in each field.

How long does it take a weed to recover from a stress such as frost or cool nights?

Clark Brenzil: Frost. After frost, go in the next day and observe plants. Blacken, desiccated or water soaked leaves are a sign that weeds have been damaged by frost and unless greater than 60% of the original leaf tissue remains, will have to wait for new leaves to grow. Cool temperatures, but no frost. Plant metabolism is like a heat-driven engine. When the plant cools down, metabolism slows and herbicide activity slows. The “engine” needs to be running in order for herbicide to get in and wreck it.  Herbicides with soil residual activity such as certain herbicides in Group 2, 3, 5, 7, 8 and 15 and Group 4 herbicides such as  2,4-D, MCPA, dicamba, and others which are difficult for target weeds to metabolize or tie up are less affected by cool temperatures because they resume work again after the temperatures warm up. Cool temperatures, especially for a sustained period before or after application, can negatively affect the performance of Group 1, 2 (non-residual), 6, 8 (foliar), 27, glyphosate and glufosinate (Liberty) . In these cases, growers are advised to wait 48 hours after temperatures recover to warmer levels. This applies to any herbicide that relies on disrupting plant metabolism to kill it.

How does one differentiate between downy brome, Japanese brome and the other grasses?

Clark Brenzil. Annual bromes are hairy at all stages of growth. This will distinguish them from many other grasses. Foxtail barley will also have hairy leaves. The difference is that foxtail barley leaves are narrow and often curled on themselves, with more of a blue-grey color at early stages.

To distinguish between bromes, pull a leaf away from the stem and look at the ligule, (the structure extending past the collar of the leaf where the sheath and blade of the leaf meet). On both species the ligule is considered membranous (skin-like) but are torn or shredded near the tip.  On downy brome the torn ends come to a sharp tip, whereas on Japanese brome the torn ends will have more of a blunt tip. Japanese brome may have deep purple band on stem near soil surface, otherwise little to no purple through the rest of the plant. Downy brome lacks the distinct purple band, but will have a purple underlayer over the entire plant, and have a distinct purple tinges when the chlorophyll fades at maturity. At the heading stage, which is too late for control, individual spikelets in the panicle (flower structure similar to oat) of Japanese brome are more tight and linear, so they resemble cereal heads. Downy brome spikelets are more open like wild oat spikelets, with seeds flaring out in a V from close connection points. At maturity Japanese brome awns are the same length as the seeds or shorter, and usually curl at maturity. Downy brome awns are longer than the seeds and extend straight out from the end of the seed.

How would a grower manage cleavers, glyphosate resistant kochia and foxtail barley in the same field?

Clark Brenzil: Diversify the herbicide rotation for all crops in the rotation, and make sure canola is very competitive — especially for kochia and foxtail barley. High saline areas probably should not be seeded to canola. Increased seeding density helps with kochia and foxtail barley management in general, providing greater early season competition. To test this, look where you find mature kochia in a field. It’s often in saline areas and in gaps in the crop stand. Foxtail barley is best controlled with glyphosate in the fall to manage perennial bunches. Once these are dealt with, controlling seedlings in the crop is fairly straight forward with most grass control products and competitive crops.

Cleavers used to be pretty much an annual weed, but with more direct seeding it’s becoming more of a winter annual. The rise in winter annual cleavers may be a case of producers not applying high enough rates in the spring to manage them. Research beginning at the University of Saskatchewan will be looking into cleavers management in canola to see if we’re taking the right steps.

Do you have a weed question? Email us and we’ll try to answer it for next week. Use the hashtag #canolaweedchat to continue this conversation on Twitter.

Weed escapes and fall weed management
While swathing or straight combining, keep an eye out for weed escapes. Unless they are an obvious sprayer miss or are weeds not well controlled under the herbicides used on the field, they could be herbicide resistant weed patches. The goal should be to avoid the patch during harvest, collect a sample to test for…
Herbicide-resistant weeds: prevention and management
Herbicide-resistant weeds are becoming more common across the Prairies. Kochia and cleavers are widely resistant to Group 2 herbicides. Kochia with resistance to Group 9 herbicide was detected on the Prairies in 2011 and have continued to expand rapidly. Group 1 resistant wild oats are in many fields. There are other examples. To reduce the…
Weeds: Foxtail barley | Glyphosate-resistant kochia
Early weed control is as important as early seeding for crop yield potential. This is a good time for a pre-seed burnoff for general weed control. Here are some specific weed issues to think about. Foxtail barley heavy in fields unseeded in 2011. Foxtail barley has proliferated in some fields that were unseeded last year…
Pre-seed burnoff: 8 top weeds and how to control them
A Canola Watch quiz in 2015 asked readers to pick the most common weeds they target in the pre-seed window on fields planned for canola. Here are the weeds ranked in order based on survey responses, along with herbicide recommendations for pre-seed application on fields planned for canola. An overwintered dandelion in late April. Volunteer…