Home / Canola Watch / Pre-seed burnoff: 8 top weeds and how to control them 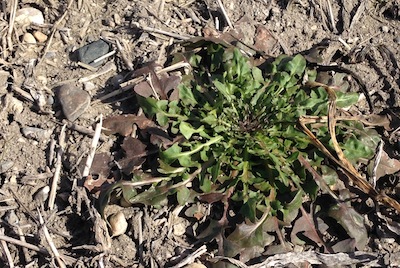 Volunteer canola. (Annual) Apply carfentrazone and/or bromoxynil along with glyphosate to get glyphosate-tolerant volunteers. This tank mix is recommended even for growers who have never grown glyphosate-tolerant canola given that some volunteers will have both traits due to natural pollen transfer. Bromoxynil may have a slight edge over carfentrazone, and there will be an additive benefit to using both. Note that the tank mix will also reduce the risk of selecting for glyphosate-resistance among other weed species, especially kochia.

Dandelion. (Perennial with annual seedlings) Of the options available for use ahead of canola, glyphosate at 540 gae/acre is the best option on dandelions. In fact, tank mixing one of the contact actives (carfentrazone or bromoxynil) might be a detriment for glyphosate activity on this weed. Contact products are good on annual weeds, but are not strong on weeds with an established tap root. If dandelion is the only target weed, use glyphosate on its own prior to canola and spray early, prior to the primary flowering period for the best yield response.

Narrow-leaved hawk’s-beard. (Annual and winter annual) Like dandelions, you want to spray this weed early to achieve proper control. As hawk’s-beard approaches the bolting stage, a rate of at least 360 gae/acre is needed. If hawk’s-beard is the only target weed in the pre-seed window, use glyphosate on its own. The contact actives (carfentrazone or bromoxynil) may look like they’re doing something because they burn off a few leaves, but this may actually reduce glyphosate performance. If narrow-leaved hawk’s-beard is a problem weed, a rotation-wide approach is best to keep it in check. This weed relies on replenishing its seed bank each year to perpetuate high populations, so preventing seed set in other crops will greatly reduce the numbers present ahead of canola.

Cleavers. (Annual and winter annual) Group-4 quinclorac and Group-13 clomazone are available to manage cleavers ahead of canola. Use them in a tank mix with glyphosate.

Kochia. (Annual) Use carfentrazone on kochia. Kochia is very susceptible to Group 14 herbicides, and given the presence of glyphosate-resistant kochia on the Prairies, using glyphosate alone is not recommended.

Foxtail barley. (Annual) Glyphosate is the only pre-seed option to control grassy weeds on fields planned for canola. Note that foxtail barley should not be the weed driving pre-seed herbicide choices. Other weeds are more important in this window, and if foxtail barley is the only weed present at any significant numbers, management post crop-emergence might be the better option because foxtail barley control gets easier as the plant grows. More green material means a better target. The weed goes from requiring two litres (720 gae) of glyphosate per acre the first week of May to 1/2 litre (180 gae) per acre in late May. Also note that while foxtail barley can tolerate a lot of conditions that other plants will not (salinity, excess moisture, drought), it is not very competitive when other plants are present. Good canopy cover is a critical defense against foxtail barley.

Stinkweed. (Annual and winter annual) This weed should be pretty straight forward to control with glyphosate, even as a winter annual, however application should occur before the weed reaches the bolting stage. Having contact herbicides in the tank mix will not be a great detriment to glyphosate activity on stinkweed, but they may not be much benefit either.

Quackgrass. (Perennial) Glyphosate is the only pre-seed option to manage quackgrass ahead of canola. However, quackgrass is quite different from foxtail barley, the only other grass weed on this list. With quackgrass, there is no benefit to waiting. At the four-leaf stage, quackgrass is as susceptible as it’s going to get. And unlike foxtail barley, quackgrass is a very aggressive competitor. Quackgrass present in the pre-seed window usually means the canola field will also require in-crop control, so Liberty Link growers will want to consider the clethodim or quizalofop tank mix. Management in cereals using a pre- or post-harvest glyphosate treatment can also help the following canola crops on fields infested by quackgrass.

Tank mix options for pre-seed burnoff
Fields with a large population of weeds, especially advancing winter annuals, should get a preseed burnoffRefers to a pre-seed glyphosate (herbicide) application that stunts the growth of the perenial weeds in a field (since glyphosate only affects top growth and isn’t taken up by the roots in the spring) in order to give the crop…
Weeds: Foxtail barley | Glyphosate-resistant kochia
Early weed control is as important as early seeding for crop yield potential. This is a good time for a pre-seed burnoff for general weed control. Here are some specific weed issues to think about. Foxtail barley heavy in fields unseeded in 2011. Foxtail barley has proliferated in some fields that were unseeded last year…
Long spring increases value of pre-seed burnoff
Weeds may start re-growing and emerging sooner this year if the weather stays warm. The more weeds up and growing ahead of the crop, the bigger the return from a pre-seed burnoff. Research conducted at the University of Saskatchewan in wheat suggests that a burnoff conducted early in the growing season provides more yield benefit…
Pre-seed burnoff: Glyphosate alone or tank mix?
Growers often see a clear economic benefit from a pre-seed burnoff of weeds, especially if winter annuals and perennials are growing strong and seeding is still a few days or weeks away. The pre-seed burnoff stops weeds from taking up moisture and nutrients the crop could use. Before spraying, check the weeds present and their…