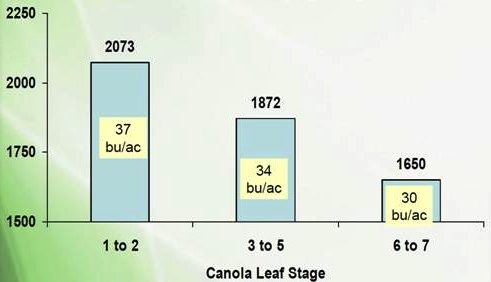 Early in-crop weed control will yield more than late control almost all the time. (This article lists the few exceptions.) Erring on the early side is the safest economic approach and then, if necessary, spray a second time.

In terms of cash costs, early spraying costs the same as late spraying, assuming rates and tank mixes are the same, but the yield benefit of early spraying can make a big difference to the return on that herbicide investment. Early weed control is the economic winner.

Studies behind this early-spraying recommendation

1. AAFC summarized nine site-years of spray timings of Roundup Ready canola at Lacombe, Beaverlodge and Edmonton, Alberta. Glyphosate was applied at the 1- to 2-leaf stage, 3- to 4-leaf stage and 5- to 6-leaf stage of the crop. In seven out of nine cases, early timings (1- to 4-leaf stage) resulted in the highest canola yields of all treatments. At Lacombe and at Edmonton sites in 1999, the latest applications yielded better because a significant number of weeds emerged after the early and mid glyphosate application. In this situation a second application of glyphosate would have been a good strategy two times out of nine. Read the study “Field-scale time of weed removal in canola” by Harker, O’Donovan, Clayton and Mayko. As a result of this research, AAFC weed scientists Neil Harker and John O’Donovan estimated that the yield effect of one weed emerging a week before the crop is equivalent to that of 100 weeds emerging three weeks after the crop.

2. Another AAFC canola study found that weed control was more important than any other major input. A summary in the Canola Digest Science Edition of 2013 reads: “In a barley-canola rotation, the primary input that influenced yield was weed control. Without weed control, the addition of genetics, a higher seeding rate and nitrogen fertilizer had no impact on net return.”

3. Research by applied research associations in Alberta with seven farm field trials across the province found that waiting for late weeds to germinate did not pay. Their results showed a 224 kg/ha (4 bu/ac) yield increase by spraying at the 1-leaf versus the 5-leaf stage.

4. In trials conducted by the University of Manitoba at multiple locations in 1998 and 1999, it was necessary to control weeds by the 4-leaf stage to prevent greater than 10% yield loss. The study.

5. In weed control timing trials by the Canola Council of Canada at Crop Production Centres across Western Canada from 1997-99, at 24 seeding date/locations out of 27, the earliest timing gave the best yield. The early applications showed a 16% yield advantage compared to the latest timing. Are these the same studies that produced this data that we commonly use: “Past research has demonstrated an advantage of 3 bu./ac. for controlling weeds at the 1-2 leaf stage of canola versus 3-4 leaf, and a 7 bu./ac. advantage versus 6-7 leaf.” See the graph:

6. University of Saskatchewan research led by Ken Sapsford and Rick Holm found that, in terms of yield, early weed control is even more beneficial than early seeding – even if you won’t be seeding for a couple of weeks. While this particular study was done on wheat, Sapsford says results would be similar for canola. Winter annual weeds like flixweed, shepherd’s purse, narrow-leaved hawk’s-beard and stinkweed can remove a lot of soil moisture in the spring as they begin to grow very early and are very inefficient water users. Early weed control stops this uptake, preserving moisture and nutrients for the crop. Read the study poster. Clark Brenzil, Saskatchewan’s provincial weed control specialist, said the study compared yields for three combinations: early weed control with seeding the day after, early weed control with late seeding, and late weed control with late seeding. “The first two treatments yielded similarly, whereas the burnoff done just before the later seeding date had a reduction in yield compared to the other two,” Brenzil says. His recommendation: “Your sprayer can travel a lot better on fields that aren’t suitable for seeding, so get the pre-seed burnoff done early over all your fields and then start seeding.”

7. Clarence Swanton at the University of Guelph has a soybean study that may add to this burden of proof. The study, published in “Weed Research” in 2016, found that light reflected from neighbouring weeds will induce a soybean plant’s ‘shade avoidance response’, which leads to increased variability in yields. In short, the soybean crop — as soon as it ‘sees’ the weeds – will alter its growing pattern, putting less energy into roots and more energy into a taller stem. Swanton says, “I do think that this response could apply to canola but needs to be tested.”

The clear message here is that even if a later application can remove all the weeds, the yield loss from that early competition cannot be recovered.

How early is too early?

A CCC agronomy specialist encountered the situation in the photo above with the tiny weeds. Canola emergence was patchy in this small area, but generally good overall. The agronomy specialist wondered if these buckwheat seedlings, though very abundant, were too small to spray? The answer is no. Broadleaf weeds sprayed at the cotyledon stage with canola herbicides (Liberty, Roundup and the Clearfield products) should be well controlled. The key is to have coverage. Large droplets and low water volumes could mean some small weeds do not get a spray droplet. When using coarse sprays, recommended to reduce drift, also use higher water volumes to improve coverage.

Grassy weeds such as wild oats may not be controlled as well at the coleoptile stage because the largely inert coleoptile will protect the true leaves from exposure to the herbicide. The other challenge is that wild oats’ natural leaf surface, which is hard to wet, makes deposition of a herbicide on the leaf surface difficult. (See page 107 here.) If the only weeds are grassy weeds, then wait until the earliest (and most costly) ones are at the 2- to 3-leaf stage. If both broadleaf and grassy weeds are present, early application to control the broadleaf weeds is recommended. If necessary, spray again to control the grassy weeds, and use a grassy weed herbicide alone or in a tank mix with the HT partner product.

How late is too late?

With any later applications, always follow labels for rate, timing and pre-harvest intervals (PHI). Applications made after the label window can lead to reduced weed control due to advanced weed staging and reduced herbicide contact with the weeds through the increased canola canopy closure. Late applications can also cause canola buds to abort, increasing the potential for permanent yield loss. Finally, late applications and higher than recommended rates of registered herbicides can increase the risk of elevated residues in the marketable grain. Read Late window applications of herbicide.

Weed BMPs: Spray early
Pre-seed weed control and one early post-emergence application is often enough to eliminate yield loss from weed competition. The Canola Encyclopedia provides these best management practices (BMPs) at the top of its Weeds section. Lone canola seedling and flush of green foxtail. Photo credit: Ian Epp Control weeds early. A combination of pre-seed weed control…
Strive for early weed control
Early weeds have large impact on canola yield potential. Research has shown a yield advantage of 3 bu./ac. when weeds are removed at the 1- to 2-leaf stage of canola instead of waiting until the 3- to 4-leaf stage. That advantage rises to 7 bu./ac. when comparing weed control at the 1- to 2-leaf stage…
Late weed spray costs in more ways than one
Spraying late or at higher-than-label rates can reduce canola profits. AAFC research showed an advantage of 3 bu./ac. for controlling weeds at the 1-2 leaf stage of canola versus the 3-4 leaf stage, and a 7 bu./ac. advantage when applied early versus the 6-7 leaf stage. At $12 per bushel, that early control provides $36…
Second weed spray may not pay
Growers who usually spray twice may not need to spray a second time this year if the canopy has closed, weeds are behind the crop, and the recommended application window is past. The crop should outcompete the weeds all on its own, and the economic yield benefit just won’t be there. For perennial weeds that…