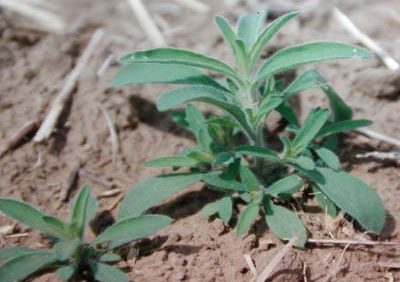 Early weed control is as important as early seeding for crop yield potential. This is a good time for a pre-seed burnoff for general weed control. Here are some specific weed issues to think about.

Foxtail barley heavy in fields unseeded in 2011. Foxtail barley has proliferated in some fields that were unseeded last year due to excess moisture. Foxtail barley is best controlled in fall. Pre-seed applications when shoots are small and hidden by the previous year’s tuft are not always that effective unless very high rates of glyphosate (720 grams per acre equivalent) are used. Waiting until the foxtail barley is emerged beyond the dead tissue of the tuft may provide a better kill, but by then done a lot of damage in terms of tying up moisture and nutrient.

How to prevent glyphosate resistant weeds from forming:
—Control weeds early. Herbicides are more effective on small weeds.
—Use a tank mix with pre-seed glyphosate applications when possible for crops in the rotation. Hitting weeds with two modes of action reduces the risk of herbicide resistant weeds escaping and setting seed. CleanStart (glyphosate and carfentrazone) is available for use ahead of canola. Through the whole crop rotation, use a variety of other herbicide groups (modes of action). Take note of other forms of resistance that are widespread in the weed of concern, such as Group 2 resistance in over 90% of kochia populations and roughly 40-50% of cleavers infestations.
—Use the right herbicide at the right rate and apply at the right time.
—Control weeds throughout the season to reduce the weed seed bank.
—Visit WeedTool  for more information on ways to reduce the risk of developing glyphosate-resistant weeds.

Treat volunteer canola as a weed. Volunteer canola emerging earlier than your seeded canola crop is not a positive contributor to yield. Emergence tends to be in clusters, creating excessive competition to the seeded crop. And the variation in emergence dates creates a non-uniform crop that makes timing of fungicide applications and harvest difficult to manage. Use a pre-seed burnoff to get rid of volunteers that emerge ahead of the crop.

Consider a tank mix partner with the glyphosate as some of the volunteers are likely to be glyphosate tolerant, but ensure the product has no residual issues for the canola crop.

Glyphosate resistant kochia found on Prairies. Now what?
Agriculture and Agri-Food Canada confirms that glyphosate resistant kochia has been found in Southern Alberta. The resistant weed species was found in three fields of chemfallow. This confirms that glyphosate-resistant weeds can develop on the Prairies. To reduce the risk of selecting for resistant weeds on your farm: —Control weeds early. Herbicides are more effective…
Foxtail barley and fall weed control
Foxtail barley is one weed that seems to be on the rise. Foxtail barley is best controlled in the fall, using glyphosate to manage perennial bunches and late germinating seedlings. Be aggressive with fall glyphosate rates. Tillage also works well on foxtail barley, but if you have to use tillage, spot till the patches only.…
Glyphosate resistant kochia on the move
Glyphosate-resistant kochia was officially documented in 11 fields in Alberta in 2011. It was confirmed in Saskatchewan in 2012 and Manitoba in 2013. It could spread quickly by prevailing winds that move the tumbling weed and by gene flow through out-crossing. The pre-seed window is a critical time to control kochia as 80% of kochia…
How to prevent selection for herbicide-resistant weeds
The first few weeks of the growing season is a great time to police fields for suspicious weeds. Look for weeds that lived through the pre-seed burnoff or post-emergent sprays while others of the same species have died. These few weeds could be resistant to one or more herbicide groups, and it would be good…