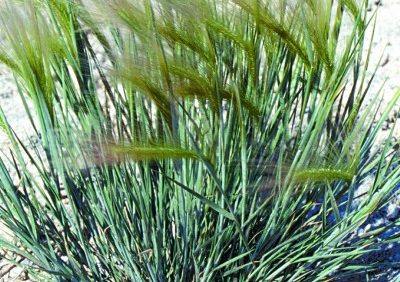 Foxtail barley is one weed that seems to be on the rise. Foxtail barley is best controlled in the fall, using glyphosate to manage perennial bunches and late germinating seedlings. Be aggressive with fall glyphosate rates. Tillage also works well on foxtail barley, but if you have to use tillage, spot till the patches only.

Waiting until spring is not the best option. Pre-seed applications when shoots are small and hidden by the previous year’s tuft are not always that effective unless very high rates of glyphosate (720 grams per acre equivalent) are used. Waiting until the foxtail barley is emerged beyond the dead tissue of the tuft may provide a better kill, but by then the weed has done a lot of damage in terms of tying up moisture and nutrient.

A new product for perennials: Distinct, a new Group 4 and 19 herbicide from BASF, has been added to our list of products available for use in the fall on fields planned for canola the following spring. Note that Distinct is for broadleaf weed control only and post-harvest only, but using Distinct mixed with glyphosate is a good glyphosate resistance management tool. Below is the complete list, with use recommendations. 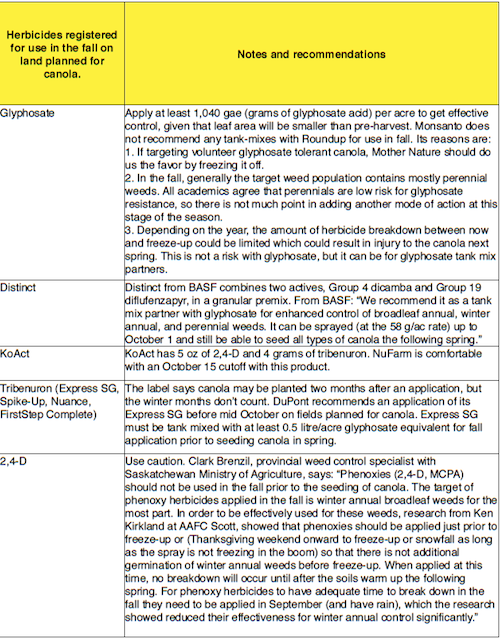 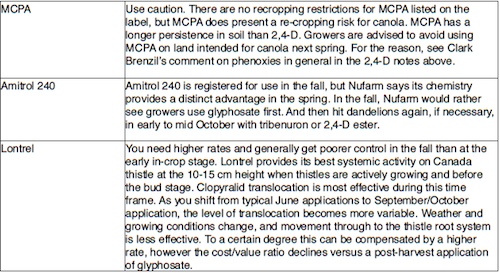 Further reading on fall weed management:
Top 10 weeds to watch for this fall (from 2013)
Fall weed control and frost

Weeds: Foxtail barley | Glyphosate-resistant kochia
Early weed control is as important as early seeding for crop yield potential. This is a good time for a pre-seed burnoff for general weed control. Here are some specific…
When to spray weeds in the fall?
Fall is a good time to control perennial and winter annual weeds, but spraying immediately after harvest may not provide the best results. Perennial weeds cut off at harvest need…
Fall weed control: Tips
Growers planning post harvest weed control to clean up fields planned for canola in 2014, take these steps for improved control and to avoid herbicide carryover damage in canola. Step…
Top 10 weeds to watch for this fall
10. Toadflax, biennial wormwood, scentless chamomile, narrow-leaved hawk’s-beard and stork’s bill are lumped together because they should be on the list, but did not make the top nine. 9. White…