Home / Canola Watch / Top 10 weeds to watch for this fall 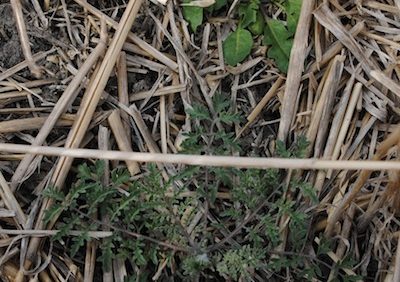 10. Toadflax, biennial wormwood, scentless chamomile, narrow-leaved hawk’s-beard and stork’s bill are lumped together because they should be on the list, but did not make the top nine.

9. White cockle. This weed is not widespread across the Prairies, but it is awful where found in central and northern Alberta, and seems to be getting worse.

8. Clubroot hosts. Stinkweed, shepherd’s purse and other winter annuals in the crucifer family can host clubroot. So can volunteer canola in a long open fall. These weeds, left untreated, can produce galls and build up clubroot in non-canola years, reducing the benefit of crop rotation.

7. Perennial sow thistle. This weed may not cover as many acres as Canada thistle (which is next on the list), but sow thistle is just as competitive.

6. Canada thistle. Ten Canada thistles per square meter can reduce canola yields by 10 bu./ac. Get rid of them now while they’re storing sugars in their roots.

5. Dandelion. The best time to spray dandelions is in the fall. Next best is early spring before flowers emerge. Glyphosate is effective.

4. Quackgrass. Once established, this weed can be tough to get rid of. Look for patches, and hit them this fall and again next spring with a pre-seed burnoff.

3. Foxtail barley. Foxtail barley is best controlled with glyphosate in the fall to manage perennial bunches and late germinating seedlings. Once these are dealt with, controlling seedlings in the crop is fairly straight forward with most grass control products and competitive crops. Be aggressive with fall glyphosate rates.

2. Escapes. Keep your eye out for patches of weeds that should have been controlled in-crop. Herbicide resistant weeds are becoming more common across the Prairies, including glyphosate-resistant kochia. If your escaped weeds are limited to a single weed species, resistance is very possible.

1. Cleavers. Cleavers used to be pretty much an annual weed, but with more direct seeding it’s becoming more of a winter annual. The rise in winter annual cleavers may be a case of producers not applying high enough rates in the spring to manage them. Grading tolerances are fairly low for cleavers, and the weed seems to be getting worse in some fields. The weed deserves special attention. Cleavers is a grading factor under conspicuous admixture and the limit is 1% for No. 1. That compares to a 5% limit for “inconspicuous admixture” from mustards, for example.