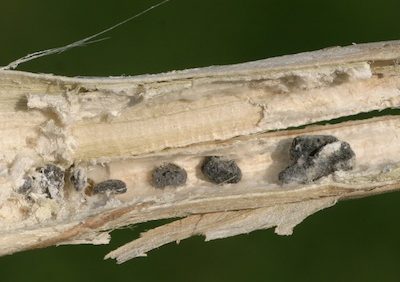 The sclerotinia stem rot infection cycle begins with the little black sclerotia left in the soil after the last time an infected crop was produced on that field. With warm soils and a couple of 10-15mm rains, sclerotia take up moisture and then germinate to form little mushrooms known as apothecia. These apothecia then release spores into the air. It takes about two to three weeks for sclerotia to germinate and release spores.

With moist conditions and a field history of sclerotinia, you can assume that spores are released by the millions and they’re everywhere. Spores that land on canola flower petals are of greatest concern.

Petal drop usually starts around 30% flowering. When infested petals fall into the canopy and land on canola leaves and stems, the infection stage begins. Spores germinate and the fungus grows on dead petals for a short time before coming into direct contact with the plant. Once petals drop and start to decay, infection proceeds very quickly with lesions being visible in as little as 24 hours.

Here is what happens in those 24 hours:

Little can be done to save the plant once it has become infected, which is why fungicide applications target the petals to prevent spores from germinating once the petals drop and decay.