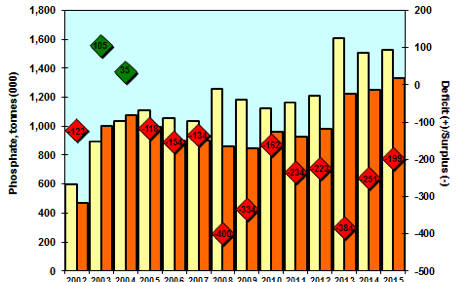 1. With phosphorus, ultimately the form you apply is less important than the amount you apply. Crop nutrition specialist Rigas Karamanos used the graph below to show the chronic under-application of P year after year. At the Saskatoon canoLAB, presenter Thom Weir chimed in and advised growers to keep an account of the applied P vs. removed P for as far back as they have records, and into the future so that they can track this on their own farm. Edgar Hammermeister advised growers to take a whole rotation approach, keeping in mind the nutrient requirements of the other crops in the rotation as well. Apply more P in cereal years of the rotation, and don’t forget that crops (such as soybean) which don’t show a response to applied P, can remove large amount of P from the soil.

2. Ways to improve sprayer cleanout and performance include using automatic continuous wash down instead of batch wash downs, Hypro’s Express Nozzle Body End Caps on each boom end, and — for the Cadillac upgrade — pulse-width modulation systems for VR and consistent application rates around corners and in fast-slow situations. Various brands are available. Read more.

3. DNA extraction is getting easier and will become a bigger part of disease detection and management. Petal tests for the presence of sclerotinia spores is one example. Soil tests for presence of the clubroot pathotypes is another. At canoLAB, Saskatchewan Ministry of Agriculture (SMA) oilseed specialist Barbara Ziesman and SMA plant pathologist Faye Dokken-Bouchard demonstrated a simple way to extract DNA from strawberries. Strawberry DNA extraction protocol – CanoLab 2016

4. When it comes to prevention of herbicide resistance, tank mixing is more effective than simply rotating herbicides — as long as key target weeds are susceptible to at least two modes in the mix. Hitting Group-2 resistant kochia with Group 2 and Group 9, for example, is not an effective tank mix. To improve weed management, keep records of key weeds present in each field along with herbicide products applied, application conditions, rates and results.

5. We know that a high canola plant count — 7 to 10 plants per square foot — provides great insurance while dealing with frost and insect pest pressure. But as we learned in the weeds talk at canoLAB, more plants seeded in narrower rows also makes for much faster canopy closure and more crop competition against weeds. In this situation, weed pressure and the need for a second in-crop application is reduced.

6. Justine Cornelsen shot this video of a cutworm at work at canoLAB.

Cutworm at work from Canola Council of Canada on Vimeo.

7. Make a set of scouting squares. Thresholds for some insects are based on how many insects are found per square metre of crop. A 50cm by 50cm square (equivalent to one quarter of a square metre) works for bertha armyworm scouting and a one foot square is for diamondback moth larvae scouting. With these squares, growers and agronomists don’t have to guess how large an area to inspect. These are easy to make and fit easily behind the truck seat.

8. When managing insects, waiting until economic thresholds are reached or even surpassed somewhat will reduce costs of production, improve profitability and help preserve a more healthy population of beneficial insects and pollinators. Read more.

9. Cover crops underseeded with the primary crop (alfalfa, for example) or seeded in fall (rye, for example) can extend crop coverage over the soil — hence the name — to wick up excess moisture, improve salinity, enhance integrated weed management and provide nitrogen fixation and green manure. Seed costs and extra management are potential downsides that must be weighed against the benefits. Read more.

10. The bottom line… Canola is a success story for Western Canada because the world really likes canola oil. Alberta canoLAB included oil tasting as part of the grading/crushing/end use session. Near the end of that session, CCC vice president of market development Bruce Jowett brought out different cooking oils including vegetable, corn, peanut, olive and canola to taste. Jowett explained the canola market advantage and its primary competition on the world stage. If anyone asks you about canola oil characteristics, send them here.

CanoLAB 2012 highlights
Most of you did not get to attend CanoLAB 3-D in Edmonton this week, so this edition of Canola Watch will bring you the highlights. CanoLAB was a unique chance to see what real canola plants look like when they are suffering from various stresses at different growth stages. The interactive and hands-on lab was…
CanoLAB highlights
CanoLAB in St. Albert featured a live — and gross — example of how wasp larvae hatching inside an alfalfa looper can kill the pest from the inside out. The video above, from ACPC, is an accelerated version of the process as it unfolded at CanoLAB. John Heard, crop fertility specialist at MAFRI, brought 2-litres…
Registration opens for Alberta canoLAB 2016
Alberta’s canoLAB 2016 is in Lethbridge February 17-18. Click here for more information on topics and to register. The early-bird price is $150. canoLAB runs from 8:30am to 4:30pm daily. Each day is identical. Lunch is provided. Participants will be divided into groups of 20 and take part in eight 45-minute sessions. Instructors are chosen…
Highlights from canoLAB Top Gun
After running canoLABs for six years at four different locations across Alberta, attracting over 1,100 farmers and agronomists over those years, it was time for a change. This year, we – the Canola Council of Canada, Alberta Canola and the University of Alberta Botanic Garden – wanted to increase focus and dive deeper into the…