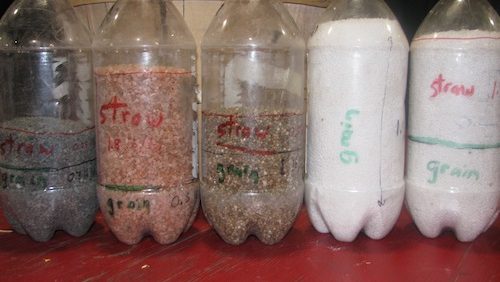 CanoLAB in St. Albert featured a live — and gross — example of how wasp larvae hatching inside an alfalfa looper can kill the pest from the inside out. The video above, from ACPC, is an accelerated version of the process as it unfolded at CanoLAB.

N, P, K and S required to produce a bushel of canola 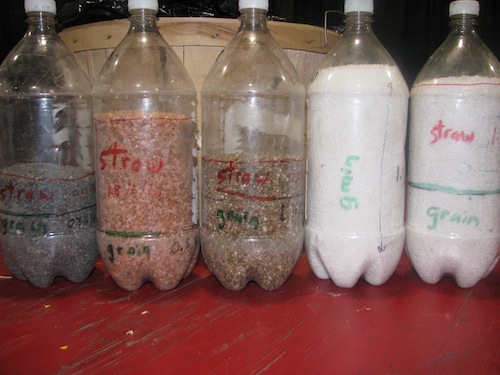 Herbicide carryover may be higher than expected this spring after the long dry stretch from July through September last year. MAFRI oilseed specialist Anastasia Kubinec and MAFRI weeds specialist Nasir Shaikh, who demonstrated herbicide damage at their station in Brandon, emphasized that dry conditions can extend the period required for herbicide breakdown. Large amounts of snow melt will provide little other than to drive the residue deeper and dilute it through the profile. Nothing breaks down at temperatures below 4°C. Check your records and herbicide labels for carryover restrictions for canola. Contact representatives from herbicide companies if you have questions about carryover potential for residual products that would otherwise, under moist conditions, be approved for use the year ahead of canola.

Kubinec and Shaikh also talked about drift damage, and provided the following descriptions of typical damage from common groups:

Group 2 (Some products can be applied the year before canola. Some cannot. A dry fall can extend the breakdown period required for all group 2 products.): Foliar (drift) and soil applied (carryover) group-2 herbicides will cause stunted growth and yellowing, purpling and cupping of canola leaves for non-Clearfield canola.
Group 4 (2,4-D and MCPA): Canola stems twist, swell and crack. Undifferentiated callus tissue will build up around roots that may resemble clubroot symptoms.
Group 6 (bromoxynil): Canola leaves will show contact burns and yellowing, particularly toward the edges of leaves.
Group 9 (glyphosate): Canola plants wilt and yellow, beginning with the newest  leaves.
Group 14 (CleanStart is approved for use ahead of canola. Heat and Authority are not approved for use ahead of canola and will cause damage.): Canola seeded into soils with Heat or Authority residue may germinate but not emerge.
Group 27 (Infinity): Canola leaves will become bleached.

Soil analysis can be done to test for certain residual herbicides. These tests do not indicate how much of the residue is available to the germinating plant. Bioassays (germinating the crop of interest in the soil of concern) are the best indicator of availability to the plant but still have a some uncertainty associated with them, and nobody offers those tests anymore. Look at last year’s herbicide records when making final rotation plans.

We will have more CanoLAB highlights next month after Saskatoon’s CanoLAB March 27-28, which is sold out. Those lucky enough to attend are encouraged to bring a camera. That way you can take your own photos of damaged plants for reference while scouting.

CanoLAB 2012 highlights
Most of you did not get to attend CanoLAB 3-D in Edmonton this week, so this edition of Canola Watch will bring you the highlights. CanoLAB was a unique chance to see what real canola plants look like when they are suffering from various stresses at different growth stages. The interactive and hands-on lab was…
canoLAB: Register now for hands-on agronomy
Agronomists, farmers and anyone else interested in hands-on learning about clubroot, insects, harvest management and more will want to attend the one-day canoLAB diagnostic workshop. Saskatchewan’s canoLAB is February 21 and 22 (choose one day) at TCU Place in Saskatoon. $150 includes lunch. Register. More on the agenda and session presenters. Manitoba’s canoLAB (featuring soyLAB)…
Top 10 highlights from canoLAB 2016
1. With phosphorus, ultimately the form you apply is less important than the amount you apply. Crop nutrition specialist Rigas Karamanos used the graph below to show the chronic under-application of P year after year. At the Saskatoon canoLAB, presenter Thom Weir chimed in and advised growers to keep an account of the applied P…
Highlights from canoLAB Top Gun
After running canoLABs for six years at four different locations across Alberta, attracting over 1,100 farmers and agronomists over those years, it was time for a change. This year, we – the Canola Council of Canada, Alberta Canola and the University of Alberta Botanic Garden – wanted to increase focus and dive deeper into the…