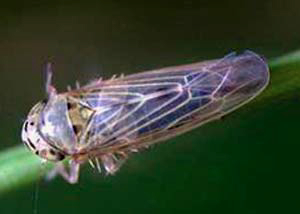 Leafhoppers. Leafhoppers carry aster yellows phytoplasma, and when they feed on canola will transfer the phytoplasma. They arrived early this year, and are still at high numbers in some areas — southern Alberta in particular. Normally, only about 1-4% of leafhoppers actually carry the aster yellows phytoplasm, but tests in Saskatchewan and Manitoba this year show an average carrier rate of 12%, according to Agriculture and Agri-Food Canada surveys.

That could mean a significant rise in aster yellows. Aster yellows affected plants stand out and look bad but are rarely a large enough percentage of plants to cause a noticeable loss in yield. Infected plants could be higher than normal this year. The level of infected plants is easy to overestimate, however, as infected stems late in the season often are above the rest of the canopy, and stand out compared unaffected stems.

Spraying leafhoppers is rarely economically effective in field crops, given that (1) the leafhoppers come in waves, (2) usually only a low percentage of leafhoppers carry the phytoplasma, and (3) canola is not a preferred host crop for aster leafhoppers, even though they will feed on it. Would it have paid to spray this year? It is hard to say, and in most fields probably not. The spray window has passed, especially if symptoms of the disease are already present on some plants in the field. It takes 2 to 5 weeks from the time leafhoppers feed on canola and transfer the phytoplasma to the point where infection starts to occur. That means, in all likelihood, leafhoppers present now have already fed on canola and transferred the disease. Spraying them will do nothing to stop infection. There is no spray to stop aster yellows itself.

The current heatwave may help to reduce damage. Hot temperatures (>35C) for several days in a row have shown in other crops to inhibit multiplication of the phytoplasma. The same may be true for canola.

Bertha armyworm. Trap counts are high in some areas. One trap at Carberry, Manitoba, has an accumulated total for the year of over 2,000, including 1,500 last week alone. Traps in RM 248 in Saskatchewan are also over 2,000, and RMs 127 and 283 will probably hit that level today. This is well into high risk range for larval feeding later in July. Moth counts provide a regional risk assessment. If you’re in an area where several traps show high adult moth counts, this should give extra impetus to scout all fields in that area. Peak adult emergence usually occurs by about mid-July and larvae from the earliest emerging moths will start to hatch later in July. Areas with low adult counts can still have economic damage from larvae. Click here for Alberta’s Pest Monitoring Network.  Click here and skip to page 6 for Saskatchewan’s latest report.

Blister beetles. These are not usually an economical pest of canola, and serve as a reminder that not everything we see will cause economic loss. Blister beetles tend to congregate in small patches and are rarely economical to spray.  However, there has been economic damage observed from blister beetles in the past. These beetles have large mandibles capable of mowing off canola blossoms fairly quickly. However, as with zebra caterpillars, the feeding is patchy with economic damage largely confined to smaller areas — a few acres — rather than whole fields. It may be economically viable to spray out the patch of high numbers while leaving the rest of the field alone, but nothing is registered for control of blister beetles in canola.

Cutworm: Cutworms are still feeding, but with canola growing strong and with cutworms near the end of their larval stages, spraying is unlikely to pay at this point of the season. However if crops are late and thin, and there are still losses occurring, then a spray may still be necessary. Assessing the larval stage and whether cutworms are starting to pupate will be key.

Aster leafhoppers arrive. Are they carrying aster yellows?
Aster leafhoppers were spotted in North Dakota, Manitoba and Saskatchewan in significant numbers this week. Leafhoppers can carry aster yellows phytoplasma, but the percentage of the population carrying it tends to be quite low. While the insect prefers to feed on cereals, they will feed on canola and carriers will transfer the phytoplasma to canola…
Leafhoppers building
Leafhopper populations are building, which could increase the risk for aster yellows. Even so, there is not really a good case for spraying for leafhoppers in canola. Why not? 1. Leafhoppers tend to come in waves for many weeks, making it difficult to time an application. 2. Early infection is more likely to cause the…
Insect update: Cutworms, flea beetles, aster leafhoppers
Flea beetles remain the single biggest insect threat this week, although pressure seems to be waning. Cutworm losses have been reported in a few fields across the Prairies, but damage is usually patchy within a field and nearby fields might not have any losses. The key with all insects is to scout and count and…
Aster Yellows To Appear Later?
Leaf hoppers in relatively high populations have been found south of Red Deer, AB. This insect is not of economic importance in canola but rather may be an indicator that Aster yellows may be prevalent later in the season. Aster yellows is caused by a phytoplasma, a plant pathogenic micro-organism. The phytoplasma is carried from…