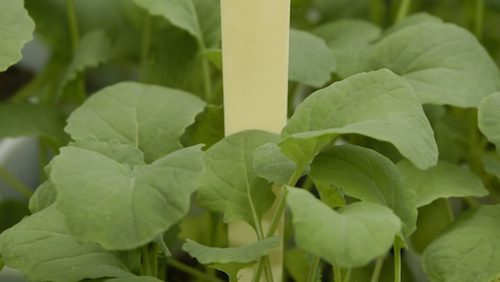 The key messages from this station:
—Keep an open mind when scouting a field for problems. Symptoms can have many causes, and it can be a costly mistake to jump to conclusions before considering all possibilities. Many probable causes were discussed ranging from diseases to insects when describing sick or non emerging plants.
—Environmental stresses like heat during bolting through flowering can cause poor pod set for longer periods than the actual stress event.

The hosts described this hypothetical situation: You’re scouting 7 to 10 days after seeding to check for any emergence issues. You notice some cotyledons are turning yellow. Why?

If it is a growing point injury from Group 2 herbicide carryover, look for increased damage at every point where you’d expect sprayer boom overlaps, and look in the four corners of the field. Corners are a great place to look for herbicide injury symptoms because right in the corner where the sprayer makes a sharp turn, one end of the boom is going so fast, application rates would be a small fraction of normal, so injury symptoms should be minimal, while rates would have been many times higher than normal at the other end, which would have been almost stopped while the machine made the turn.

Fertilizer toxicity will also occur in patterns, often worse in dryer or lighter parts of the field that don’t have the moisture to diffuse fertilizer concentrations beside the seed. You may also notice differences row to row if some openers are worn more than others and not providing required seed/fertilizer separation.

Flooding can cause yellowing of bottom leaves. Is damage more common in low spots?

Frost damage can cause leaves to yellow. Look at the stem. Severe frost damage will cause browning and drying up of the stem up off the soil surface, closer to the cotyledon.

Stem and hypocotyl (the part of the seedling’s stem at and below the soil surface) damage near the soil surface and below is more likely a seedling disease. Seedling diseases can be more common in canola seeded too deep into cool soils. Because the plant takes that much longer to emerge and because the size of the vulnerable hypocotyl area is that much larger than with a shallow seeded plant, the plant is more susceptible to seedling diseases. In this case, Doug and Murray knew the cause was rhizoctonia seedling disease because the soil was inoculated with high levels of rhizoctonia and all other conditions were controlled in the lab. However it was pointed out to look at the hypocotyl with a magnifying glass to verify disease or insect chewing as to causes with roots/plants.

Canola can over-react to temperature stress. Symptoms of heat and cold stress during bolting to flower were pointed out on specimens from the various greenhouse treatments. Murray discussed how canola hormone balances are very sensitive to stresses (his analogy was canola is a teenager) and how hormones dictate the architecture of the flowering raceme — which pods get first choice and which ones are deprived or aborted.  The responsive nature of canola predisposes it to over-react to stresses like heat and exhibit long sections of blanks on flowering stems. Doug discussed the range of harmful temperatures — over 30 C daytime, but also a minor contributing effect of warm nights over 16 C. Cool summer days and cooler nights can create missing pods as well. Differences in canola pod patterns were pointed out between nutrient stress (starvation mode) versus environmental stresses (shock modes). Typically in a starvation mode the plants will do everything to conserve reproductive parts (pods), whereas shock stresses result in reproductive parts being lost.

Disease scouting: be a diagnostic detective
Harvest is a hectic time of year, but periods of waiting to get started can be tough too. While you’re out checking to see how mature your canola is or what soil moisture conditions are like in your fields, be sure to pull up some plants and test our your diagnostic skills. There has been…
Station 1: Weed control tips and herbicide management
Station hosts: Neil Harker, Agriculture and Agri-Food Canada Eric Johnson, Agriculture and Agri-Food Canada Shawn Senko, CCC Keith Topinka, University of Alberta Five quick snappers from this presentation: 1. Herbicide efficacy often goes down in dry conditions because most plants — weeds and crop — will develop a waxy layer and curl up their leaves…
Station 6: Canola diseases
Station hosts: Mike Harding, AARD Ron Howard, AARD Sheau-Fang Hwang, AARD Ralph Lange, Alberta Innovates This was a 30 minute whirlwind of all canola diseases. We will have lots more on blackleg, sclerotinia and clubroot throughout the year. For now, here are a couple of interesting highlights from this station: —Seed treatments are, for the…
Station 5: Potassium, Boron and Calcium
Station hosts: Derwyn Hammond, CCC Dan Orchard, CCC Greg Sekulic, CCC   Potassium. For every 5 pounds of nitrogen a canola plant takes up, it needs 4 pounds of potassium. Most Prairie soils still have adequate potassium reserves, but tight canola rotations and high canola yields will be mining the soil and deficiencies are starting…